Contrary to what Greta Thunberg and many Millennials and Generation Z-ers might care to believe, the idea of trying to avoid harmful pollution by making less use of the private car is also deeply ingrained in some of us who date from earlier generations.

Faced with the lack of a car for a weekend, my challenge was getting from home (Haslemere) to visit family (near Cheltenham), then a day trip to Cardiff for the Wales vs. Scotland Six Nations match, which became a visit to Park Junction Signal Box at Newport when the match was called off.

While there is a reasonably priced super off-peak return from Guildford to Cheltenham Spa (never book from Haslemere as it’s far more expensive), I was inspired to make my trip more interesting by using a Cotswold Discoverer ticket for a slower, but scenic, outward journey.

For those who may have missed my feature last summer on a cheap tour of the Cotswolds, this day ticket is remarkable value at £10.50 (£6.90 railcard) and includes rail travel from Swindon to Cheltenham, Oxford  to Moreton-in-Marsh and Ashchurch-Yate, along with a swathe of bus routes across the Cotswolds.

Having secured myself a cheap advance ticket from Haslemere to Oxford (£11.05 with a railcard) I could then have continued on to Cheltenham, as I did last time, by walking to St. Giles in the city centre and caught the Swanbrook 853 bus (three times daily, 90 minute journey time) which follows the A40 via Witney, Burford and Northleach. 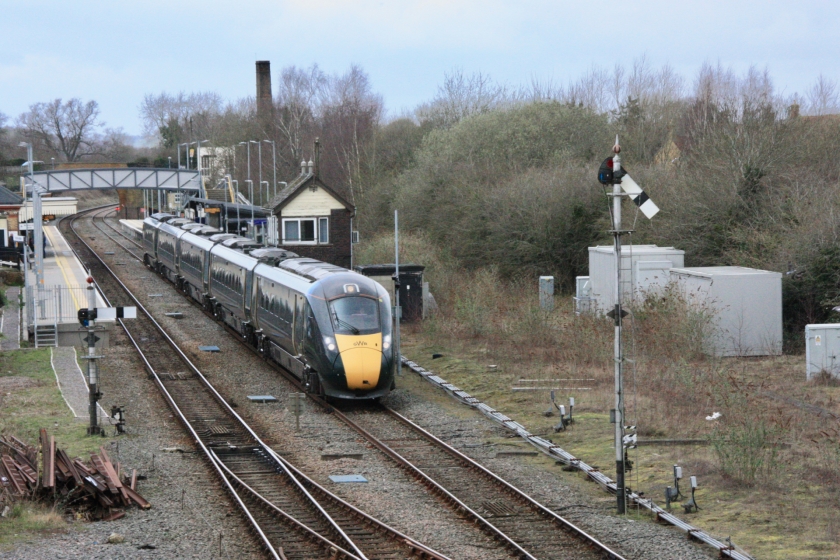 But, with time on my hands, I opted for a more scenic and leisurely trip by taking a 35-minute journey down the delightful Cotswold Line to Moreton-in-Marsh and then catching the popular Pulham & Sons 801 bus from the station forecourt at 12.25 to Cheltenham’s Royal Well Bus Station (journey time 1 hour 20 minutes). 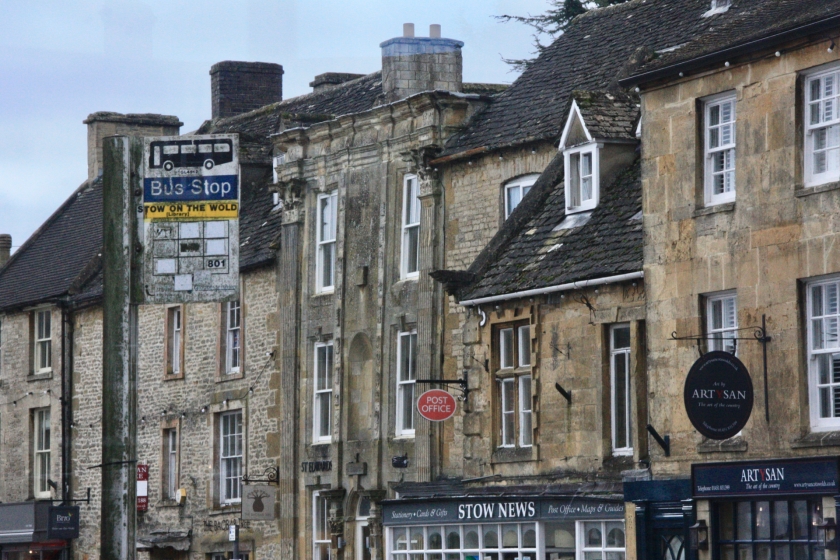 This trip is a great way to see and appreciate two of the Cotswolds’ most attractive towns, Stow-on-the-Wold (above) and Bourton-on-the-Water (below). Most journeys then continue on to Northleach, but mine took a more direct route along the A436, passing the remote former station at Notgrove on the Cheltenham-Kingham line (closed 1962).

Completing my journey to the village of Prestbury on the outskirts of the town, I then caught a D bus from the centre to a stop near the Racecourse, where the normal Park & Ride site was closed due to the Cheltenham Festival race meeting.

Journeys on the D/E buses towards Bishops Cleeve are included in the Cotswold Discoverer area, so that, although I was faced with a 30-minute walk from the racecourse to my boyhood home, I had completed the journey for £17.95 – plus the £7.50 cost of a Haslemere–Guildford single. 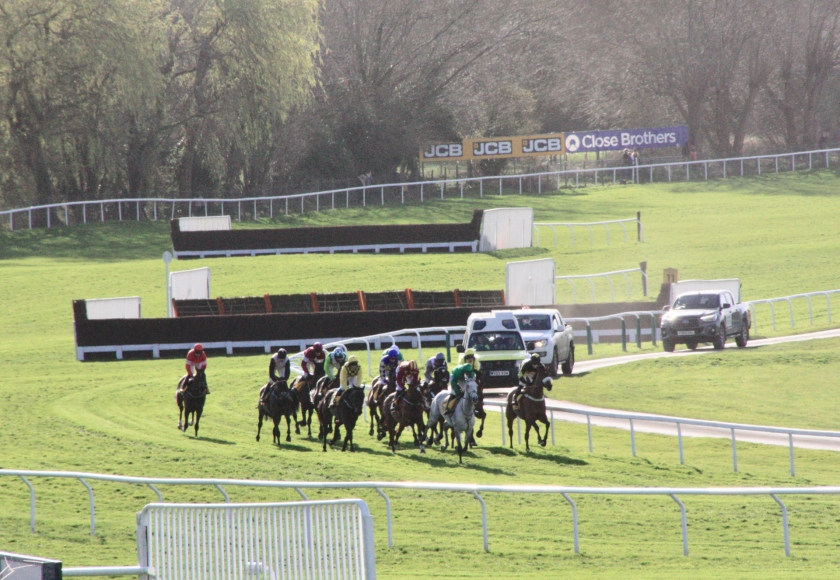 Given that it was the final day of the Cheltenham Festival I felt compelled to do what I had done as a child at school in Prestbury, and head down to the perimeter path directly opposite the main grandstands of the Prestbury Park course to see my Gold Cup selection Presenting Percy gallop past – before falling at the penultimate fence!

On to Saturday (14 March) and what to do after the previous day’s cancellation of the Wales vs. Scotland match, which left me with pre-bought bus and rail tickets and still fancying a day out.

Besides the saving of buying a Cheltenham PlusBus ticket in advance online, another trick I had learned a couple of years ago was not to book and off-peak return from Cheltenham Spa to Cardiff (£13.80 with railcard) but to book to any station on the Ebbw Valley line, where the day return fare is a mere £10.85.

So, with no sporting action and a day return ticket to Cross Keys, I decided to pay an overdue return to what must now be the finest working signal box in Wales, Grade II-Listed Park Junction on the outskirts of Newport. This controls the convergence of routes from Newport and Cardiff (Ebbw Junction) towards Ebbw Vale, as well as a little-used branch to Machen Quarry.

Consulting Realtime Trains before setting out, I had noticed that there was a scheduled freight working that day from Westbury to the quarry and back, which would have added to the interest. Alas, like the Six Nations match, it was cancelled, so the only action would be hourly Ebbw Valley services, formed of ex-Greater Anglia Class 170 units.

As Coronavirus panic spreads, so trains seem to have emptied, and that was my experience during the trip from Cheltenham, This began on a reasonably busy XC Voyager at 09.52 to Bristol Parkway, followed by an almost deserted 10-car Class 800 formation to Cardiff Central, which would otherwise have been totally rammed with spectators bound for the Millennium Stadium.

After consulting the local OS map, I had worked out that the easiest way to get to Park Junction would be to walk from Pye Corner, the first station on the Ebbw Vale branch. So after a brief visit to the next station up the line at Rogerstone, I returned to Pye Corner and set out on a fairly hilly 30-minute walk to the footbridge overlooking Park Junction. 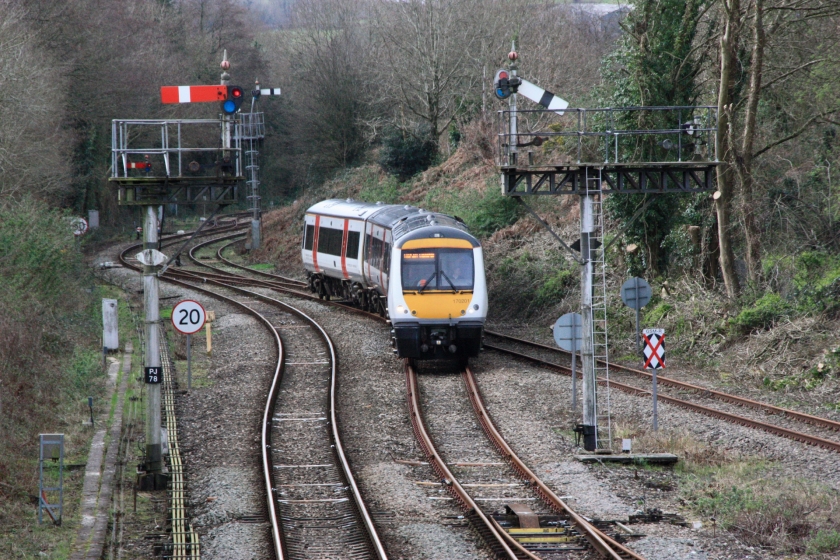 This involved heading south onto Basseleg Road, then continuing over the M4 and following the main road uphill, before taking a right turn into a large housing estate and heading in a southward direction until reaching a road called Shakespeare Crescent, which leads you to a sight of the footbridge and with some fine views of Newport, and its famous transporter bridge, along the way.

There would have been a shorter and more scenic alternative, by taking a right turn immediately after crossing the M4 that was signed as the Sirhowy Valley Walk and emerged close to the signal box at the end of a road called Wells Close, but it looked far too muddy on Saturday.

For anyone contemplating a visit to Park Junction, there is a good view towards the box through some railings on the south side of the footbridge, but without something to stand on, its parapet is tantalisingly too high to get shots looking south on the double track towards Ebbw Junction, where you can see the first of the box’s semaphores, its down home PJ80, with a small shunting arm beneath (photo above).

Besides a handful of semaphores in the immediate vicinity of the box, Park Junction also controls a number of single aspect colour lights up the Ebbw Valley Line, including those seen here at Rogerstone (above) and Pye Corner (below).

Having seen a couple of passing services, I walked down to the nearby Cardiff Road, where there are regular buses to Newport Bus Station, a ten-minute walk from the city’s railway station. From here I travelled back directly to Cheltenham in the sumptuous declassified first class compartment of a TfW Class 170 unit, another service (15.22) that was noticeably light on passengers.

While it doesn’t quite live up to the sea wall at Dawlish, the route via Chepstow has long been a favourite, with some fine views across the broad expanse of the River Severn, as well as evidence of recent flooding, along the stretch of line between Lydney and Gloucester. 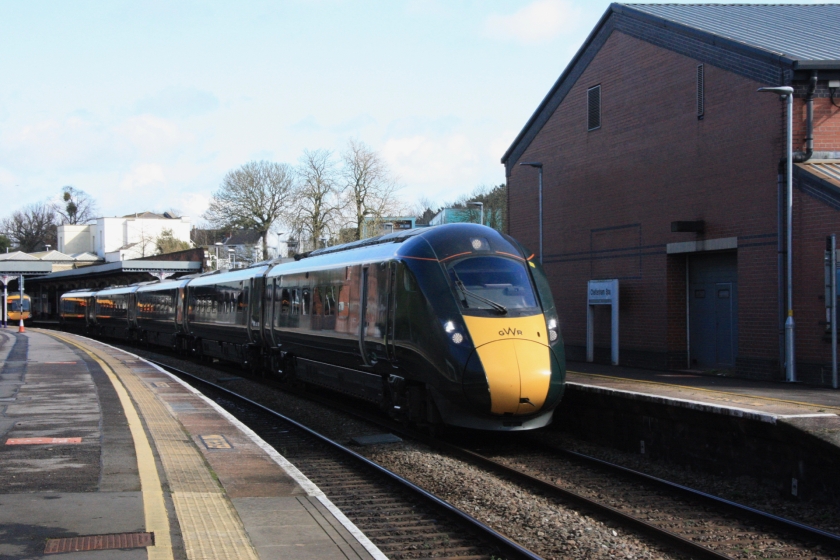 Returning home on Monday (16 March) meant a trip in glorious sunshine along the charming Golden Valley route via Stroud from Cheltenham Spa to Reading. Services were significantly improved in the December 2019 timetable revamp, with hourly Cheltenham-Paddington trains, meaning plenty of cheap seats on mid-morning services. 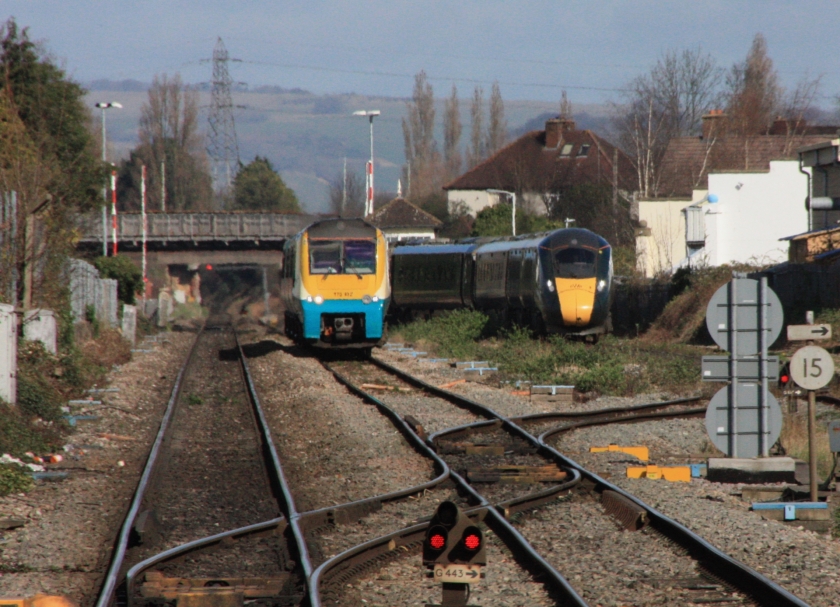 My advance single from Cheltenham Spa to Guildford cost just £13.20, travelling at 11.58 to Reading, changing there and at Guildford, and completing the final leg of my weekend excursion with a Guildford-Haslemere single (£4.90), albeit on a rail replacement bus, after a major power failure on the Portsmouth line.

All up, I had spent £60.65 in fares to cover a total distance of just over 350 miles, comprising ten separate rail journeys and ten trips by bus. That is slightly less than it would have cost in fuel for our family’s Subaru Outback (approximately £65 based on 30mpg and petrol at 125p/litre).

But crucially it meant a saving of 9.04kg in CO2 emissions, based on the vehicle’s estimated output of 160g/km. I don’t really know what 9kg of CO2 looks like, but it sounds an awful lot to me, so I do hope that Greta would have been impressed.

Coronavirus will, of course, dominate the headlines for the next few months, with most leisure travel stopping as a result. But, when normal times do return, as surely they will, it would be good to think that hardened car drivers do begin seriously asking themselves whether their journey could be made by bus or train.