Re-signalling in the Barnetby area at the end of 2015 may have removed some of the finest remaining semaphore signals on the national network, but it did not completely spell the end of mechanical signalling in North Lincolnshire.

Besides the three recently-renewed semaphores at Gainsborough Central (featured in my previous post: Back to Brigg), and one semaphore protecting the Brigg Line at nearby Gainsborough Trent Junction, another surviving outpost is on the fascinating Barton-on-Humber branch line.

This is a ten-mile long spur off the route to Grimsby and Cleethorpes, which once served New Holland Pier, and provided a connection with Humber ferries to Hull, until opening of the Humber Bridge in June 1981.

Passengers from Hull must now take the Humberlink bus from Hull Paragon interchange to Barton-on-Humber, from where a Northern Trains Class 153-operated service connects with the bus and provides a two-hourly service onwards to Grimsby and Cleethorpes.

Heading east from the basic station at Barton-on-Humber (pictured top) and after pausing briefly at Barrow Haven, the first sight of any signalling along this line is a two-aspect distant on the approach to New Holland.

This is followed by a semaphore home signal at the start of a sharp right hand bend, which is plated OX28/BR5 to denote both the adjacent Barrow Road Crossing, whose crossing gates – wooden in appearance, but actually new wooden-like metal ones – it protects, as well as the nearby block post at Oxmarsh Crossing.

New Holland Town and Pier stations closed when the Humber Bridge opened and the replacement New Holland station is a simple single platform on the south side of Barrow Road Crossing.

Here double track begins, although the easternmost line at this point is a now disused siding, and all that remains of the former route onto New Holland Pier.

After passing Barrow Road’s down home signal the train pauses only moments later just beyond the Oxmarsh Crossing up home signal, where the single line token is surrendered to the signaller, who stands on a metal platform alongside the modern (1959) box.

Passing a set of (genuinely) wooden crossing gates, the train then crosses to the up line of what now becomes a double-track alignment, and after passing the Oxmarsh Crossing up section signal there is then a straight two-mile stretch of line to Goxhill and the route’s final mechanical signalling.

Along this section you pass the Oxmarsh down and Goxhill up distants, of which the Oxmarsh down distant is now a fixed signal. In this view, 153359 passes Oxmarsh Crossing’s down distant on 19 January 2018, with the 12.55 Cleethorpes-Barton-on-Humber service. Note signs of apparent subsidence on the up line!

At Goxhill an attractive Great Central Railway Box dating from 1910 – complete with an original LNER No Trespassing sign – stands south of the attractively preserved station building and a third set of wooden level crossing gates.

Here there is an up home behind a sighting board at the north end of platform 1, with a down home just south of the box. The up distant  signal can also be seen back along the straight section of line towards New Holland.

For more background  on this interesting line and area, take a look at http://www.bartonrail.org.uk 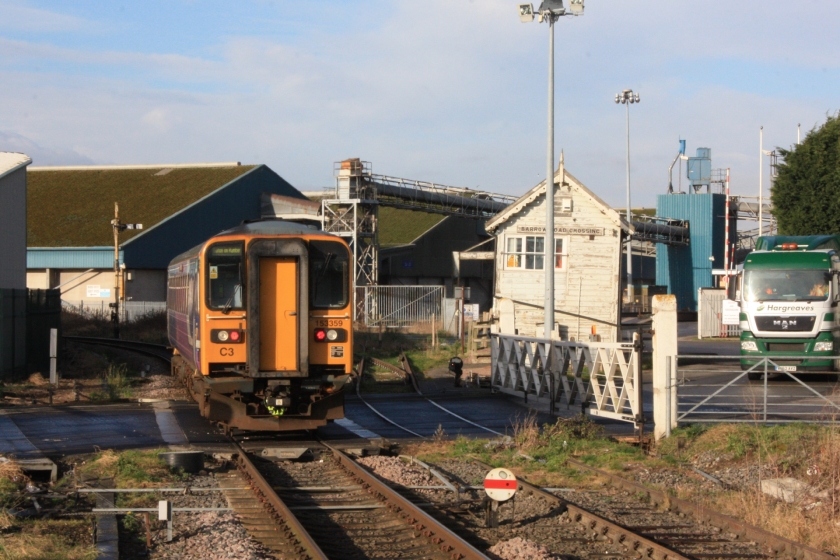