All good things come to an end, and so it does this weekend for the marvellous signal boxes and semaphore signalling along the Wherry Lines from Norwich to Great Yarmouth and Lowestoft, which have at least lasted a year longer than planned, owing to delayed commissioning of the new signalling.

Regular readers of this blog will know I have made numerous visits to the area over the past three years to record the changing scene, so no surprise then that I felt I must pay my respects to what is being lost by visiting the area on the final day of services to Great Yarmouth before its three-week shut-down.

Staying the night once again at the charming Wherry Hotel in Oulton Broad gave me two days (30/31 January 2020) to make farewell visits to a number of my favourite locations, in order to capture for the last time one of Britain’s finest remaining mechanically-signalled areas.

What was noticeable on 30 January was that the entire Wherry Lines service was in the hands of the new Class 755 units, with their reliability seeming to have improved, with few cancellations or delays during the day. A reminder of the old order was de-branded Class 170 unit 170271 at Crown Point, from where I gather it made a final exit later in the day, the last of its class to leave the area.

Beginning my final tour at charming Cantley, there was a chance to photograph a Lowestoft bound service passing the famous co-acting down home (C21) before taking a walk westwards to see the following train passing down distant C22 (bottom photo).

Cantley is a delightful small box with a 22 lever frame and the one place I did not visit on my Network Rail-organised tour of the route’s other signal boxes in December. As these views show, it had just four remaining signals once demoted to gate box status, the down signals mentioned above, along with up distant C1 and up home C2. 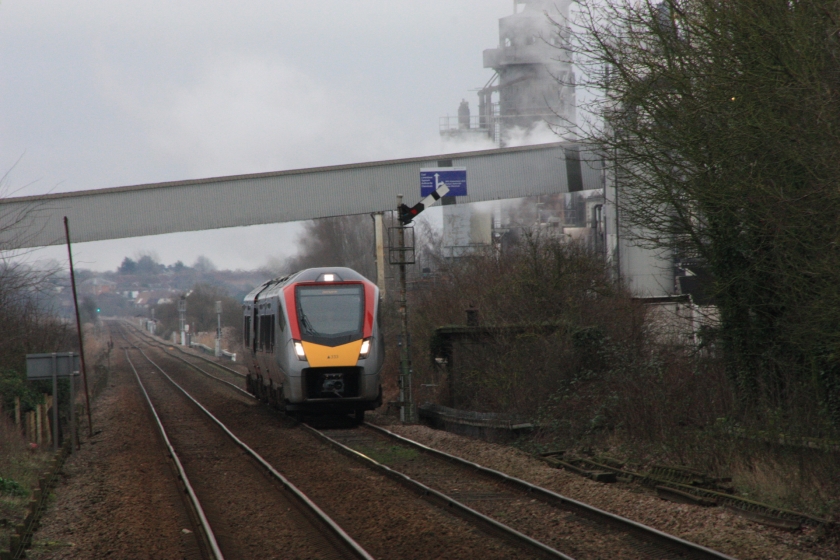 Standing at the eastern end of the down platform, close to the box and level crossing, there is a good view of an approaching up train on a long stretch of straight track that takes it past the distant and alongside huge sugar beet plant, as it nears the station.

Moving on next to Somerleyton, lesser known of the Lowestoft route’s two swing bridges, I was intrigued by the photographic potential of a farm crossing of the line shown on my trusted OS map that is just round the left hand curve in the line beyond the station in the Lowestoft direction.

It is a brisk 15 minute walk on the road leading away from the station (a marvellously preserved building in private ownership) before  taking a right turn just before a farm and down a muddy track, signed as the Angles Way. (Above and top photos).

Looking back towards the station there is a sight of down section signal SB10, with the up outer home (SB13) in front of a sighting board visible just beyond – a signal that was almost impossible to see from the up station platform. 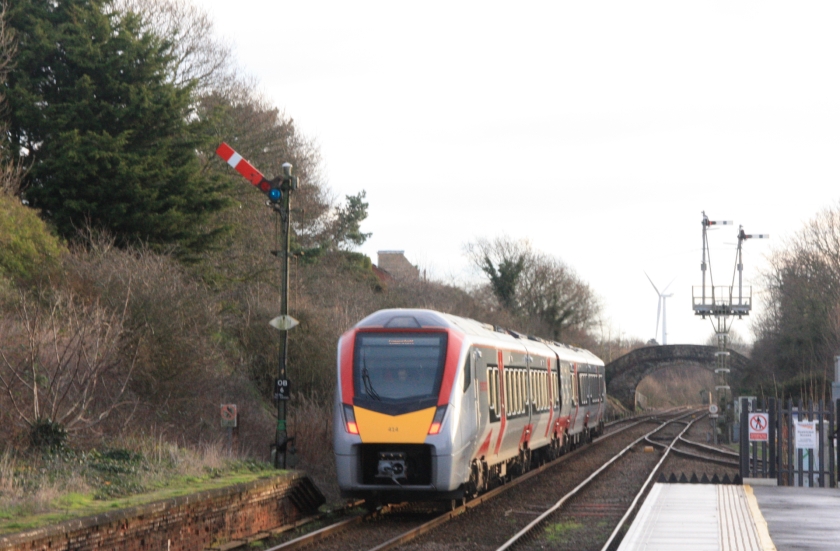 This is an attractive and busy spot, with some fine opportunities to photograph the semaphore signals at the ends of each platform and junction signals for the East Suffolk Line just east of the station, best appreciated from a foot over-bridge some distance beyond the junction.

Taking a brief interlude at Brundall – where I was later interviewed by a reporter from BBC Look East – it was time to make a short final trip along the Great Yarmouth route for another attempt to photograph a Class 755 unit passing the two down distant signals near Lingwood. 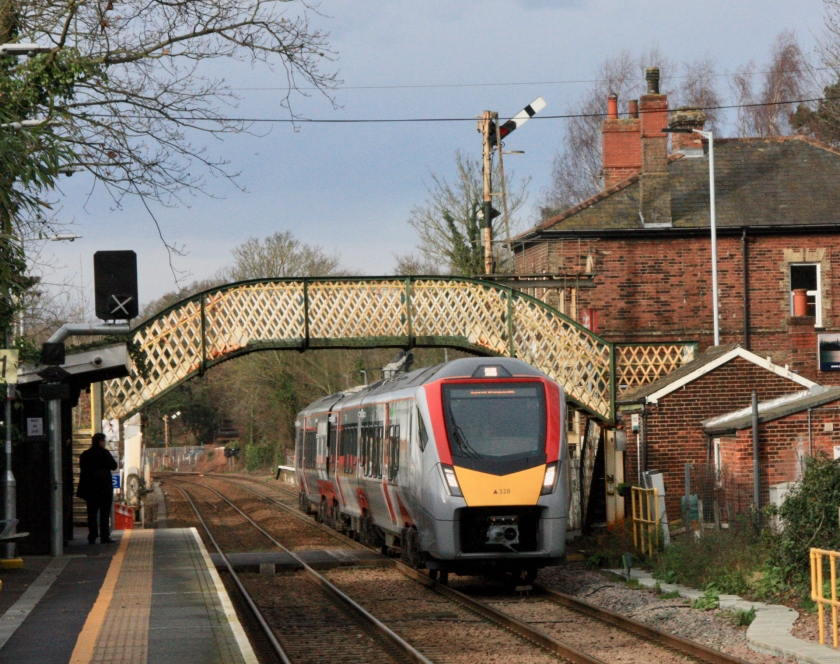 It has always struck me as quite remarkable, given that there is only one working semaphore distant in the whole of Scotland, just two in Wales and only a handful across northern England, that here were two working examples within 300 yards of each other!

After stopping to photograph (with permission) the unique lever frame at Lingwood controlling just two distant signals (photo above) I pressed on with a 30-minute walk to the over-bridge on Hemblington Road in the nearby village of Strumpshaw. 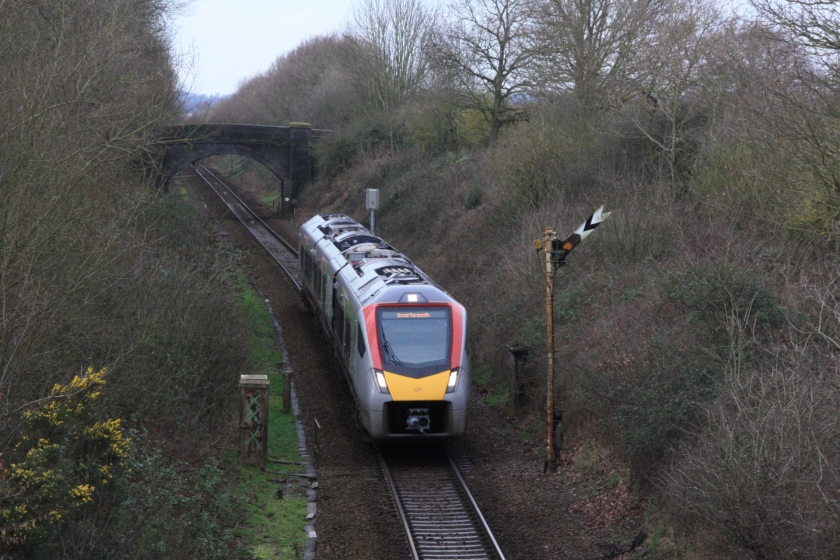 Having been thwarted by last minute cancellation when I visited this spot a couple of weeks ago, my luck was in when 755327 made a punctual appearance with the 10.36 Norwich-Great Yarmouth, seen here passing the Chapel Road distant CR1 (above) and then Lingwood’s down distant (L3) below.

Concluding my farewell day with another 30 minute walk on to Brundall, I then headed to delightful Reedham, in order to get a shot of a 755 unit passing the Reedham Swing Bridge down home (RB6) with the 12.55 Norwich-Lowestoft (below).

My very last photographs of Wherry Line semaphores came with a return to Oulton Broad North, in descending gloom, where from the brick footbridge east of the station, there was a chance to see 755412 on the 15.02 Lowestoft-Norwich (below), closely followed by 755411 on the 15.07 Lowestoft-Ipswich. 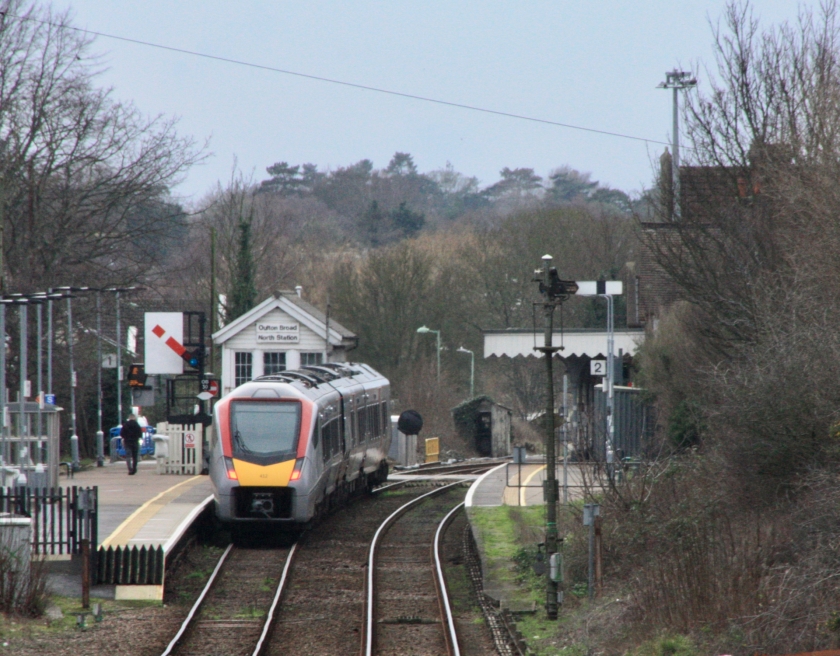 For the record, the last train scheduled to pass the boxes at Great Yarmouth and Acle was 2P45, the 23.34 Great Yarmouth-Norwich on Friday (31 January). Later today (Sunday, 2 February 2020) the last train to be signalled by those at Lowestoft Central, Oulton Broad North, Brundall Junction, the swing bridges at Somerleyton and Reedham and the gate box at Cantley, will be the 23.35 Lowestoft-Norwich (2J99).

A poignant moment and my last ever photo of Wherry Line semaphores shows 755411 on 31 January 2020 passing Oulton Broad Junction with the 15.07 Lowestoft-Ipswich

What becomes of the redundant equipment and boxes remains slightly unclear, although Reedham Junction Signal Box is destined for the North Norfolk Railway and Brundall Junction is going to the Mid-Norfolk Railway. Cantley’s famous co-acting signal has also secured a place in preservation, while Network Rail has apparently found homes in preservation for all of the remaining signals.

Given a recurrent theme of signalling problems delaying trains across the UK network, compounded by huge issues with commissioning of the new Class 755 units across East Anglia, I sincerely hope for the sake of local rail users that all will be working smoothly when the routes re-open on 17 February (Great Yarmouth) and 24 February (Lowestoft).

My book “Britain’s last mechanical signalling” is out now, and is available from publishers Pen & Sword, from good transport bookshops and from many online retailers. 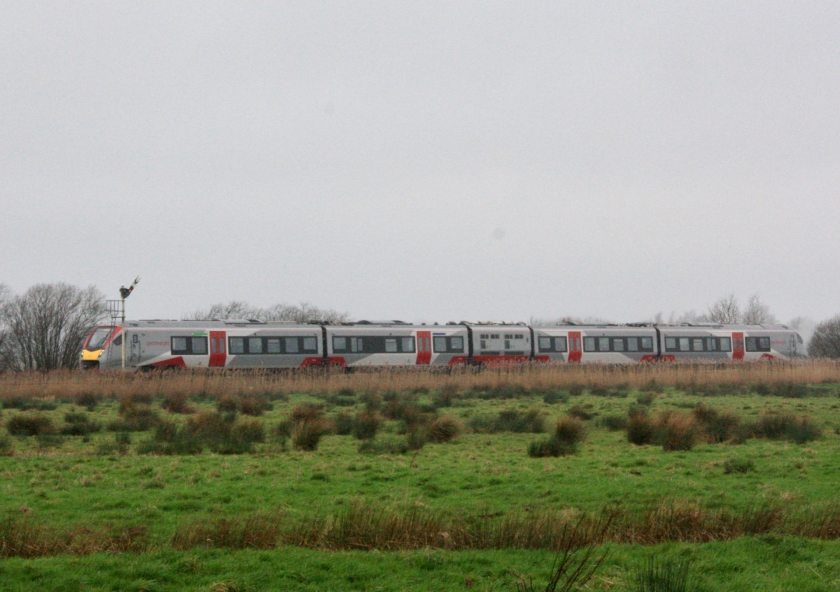