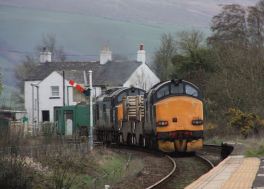 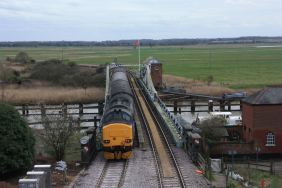 When three Class 37 locomotives left the Watercress Line during 2016, it was not because the 50-year old diesel locomotives had found a new home in preservation. Instead they were sold back into mainline service, with two being acquired by freight operator Colas Rail (37324/37901) and one going to UK Rail Leasing (37905).

This trio form part of a once 309-strong fleet of English Electric Type 3 locomotives, delivered between 1961 and 1965, and along with the Brush Type 4 (Class 47s) one of the most enduring features of British Railways’ modernisation plan of 1955, which heralded the end of steam and also saw introduction of many far less successful diesel designs.

Around 36 of the class are currently in preservation, but others remain active on the main line, where operators such as Colas Rail currently have seven working machines. But by far the largest owner and operator of Class 37s is Direct Rail Services, once a subsidiary of British Nuclear Fuels (now the Nuclear Decommissioning Authority), which has 31 of the class in its total fleet of 92 diesel locos and uses them on nuclear flask traffic to and from Sellafield, as well as on passenger services for operators Northern Rail and Abellio Greater Anglia.

During my recent travels to East Anglia and the North-West to photograph semaphore signals it has been a great pleasure to be able to revive memories of the Cambrian, Highland and West Highland routes in the 1970s and 1980s, by travelling on the Class 37-hauled trains now used by workers to and from Sellafield and on the shorter commuter and holiday routes from Norwich to Great Yarmouth and Lowestoft.