Weymouth remains a great magnet for day trippers and holidaymakers, so on the first Saturday proper of the summer holidays, and with the added bonus of seafood festival, there was bumper traffic to the resort from Yeovil Pen Mill on 14 July 2018.

In less than 90 minutes during the mid-morning there are four services to the resort from Pen Mill, including the highly popular 09.50 SWR service from Basingstoke where three coaches of its five-car formation continue to Corfe Castle on the Swanage Railway (described in my earlier blog post). Here 158886 + 159014 (rear) depart for Weymouth and Corfe Castle. 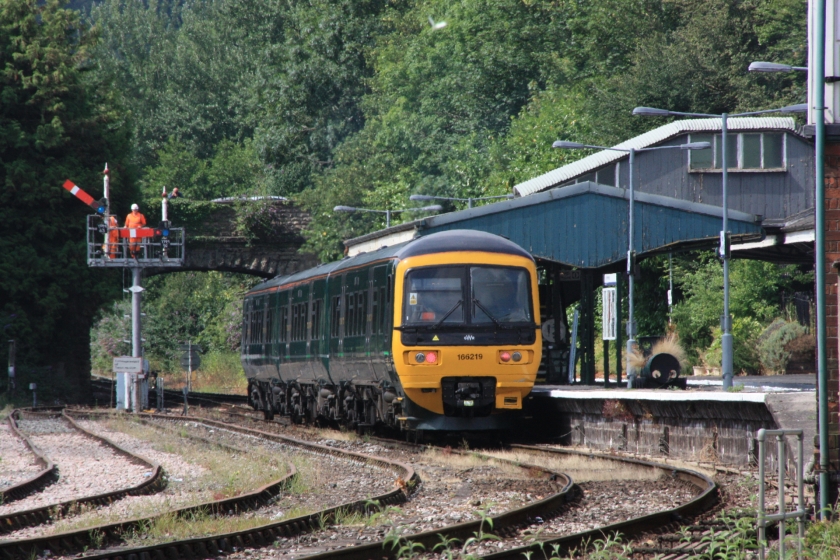 Another feature on summer Saturdays is the Weymouth Wizard – an extra summer service that has previously brought an HST onto the Heart of Wessex Line, but has sadly been replaced by one of the Class 166 units transferred to Bristol following Thames Valley electrification. Pictured above is 166219 with Saturday’s Wizard.

Adding to this tally of Weymouth-bound services on Saturday was UK Railtours’ Sunny South Express, a fully-booked charter from Stevenage that took the Pen Mill route only on its outward journey and was hauled by GBRf 73961 Alison and 73963 Janice. The train is seen here departing around 25 minutes late at 12.30, after a waiting for a delayed Bristol-bound service.

It was also good and interesting to see was a pair of Network Rail engineers spending most of the morning at work on the station’s down (platform 3) starting signals, YPM63 and YPM59, as seen in the photo above.

As my previous photo-spots on Pen Mill mentions, this is an isolated outpost of mechanical signalling, where all the southbound signals are modern upper quadrants, while the three northbound signals remain GWR-style lower quadrants.

The only one of this lower quadrant trio visible from the station is up starter YPM4, seen below as 166219 passes with the delayed 14.10 departure for Gloucester.

Travelling back to Dorchester on the 14.22 SWR service – formed of the two-coach set that makes a return journey from Weymouth to Yeovil Junction, while its accompanying the three car Class 159 unit travels on to Corfe Castle – made me realise one interesting distinction about this service.

This is the only SWR service to serve request stops – there are none in the SWR area, but this service calls on request at Thornford, Yetminster and Chetnole and on Saturday we picked up passengers at the latter two. How’s that for a piece of railway trivia?

To read more about this fascinating line, do visit http://www.heartofwessex.org.uk