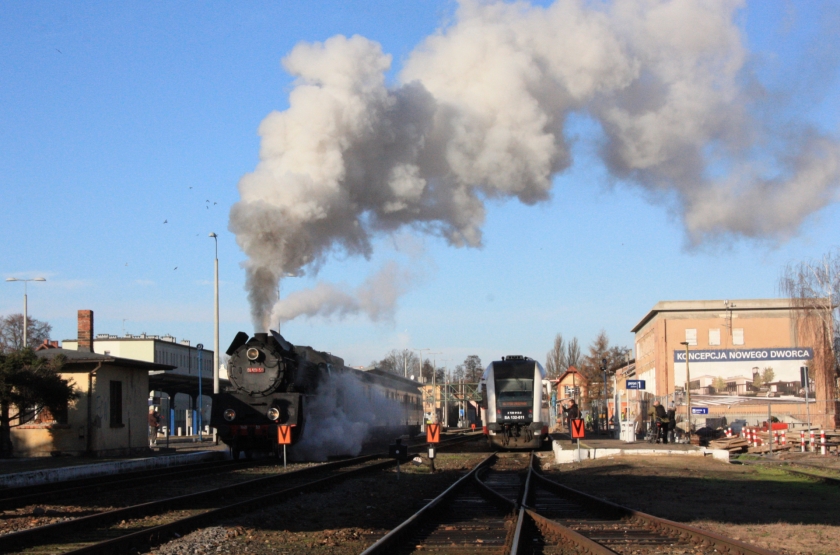 Daily steam working will now continue from Wolsztyn in western Poland into 2020, at least until the famous May Day Parade event, and there is even the prospect of extended weekday operations from the world-famous depot.

Plans to refurbish a water column on platform one, as part of the station re-building, would allow steam services to run from Leszno and through Wolsztyn all the way to Zbaszynek on the Berlin-Warsaw main line.
Instead of the present two weekday round trips from Wolsztyn to Leszno, the restored watering facility could mean the regular diagram becomes Wolsztyn-Leszno-Zbaszynek-Leszno-Wolsztyn from early in the New Year. 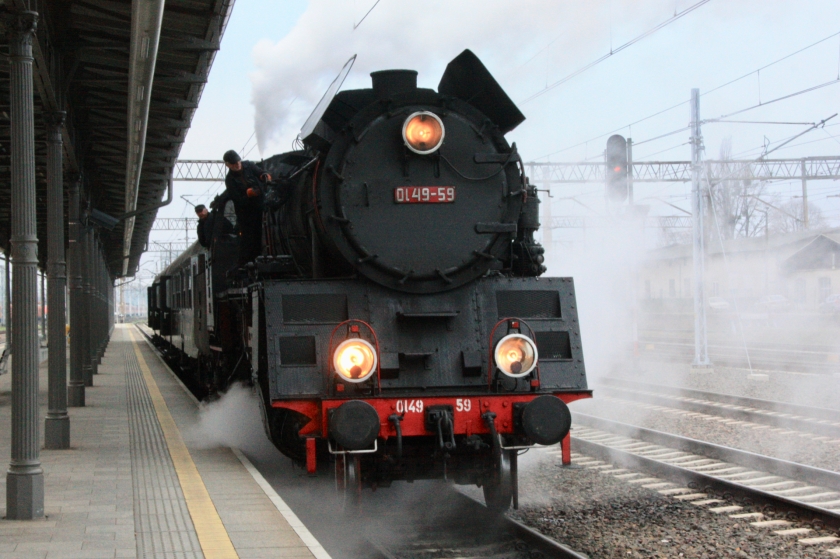 Ol49-59 receives attention from its crew as it stands in platform 4a at Poznan Gl. on 23 November 2019 after arrival with the 06.30 from Wolsztyn

There are currently only three weekday services between Wolsztyn and Zbaszynek, so this change should mean steam operation of the current 10.20 Leszno-Zbaszynek and 12.55 return services. 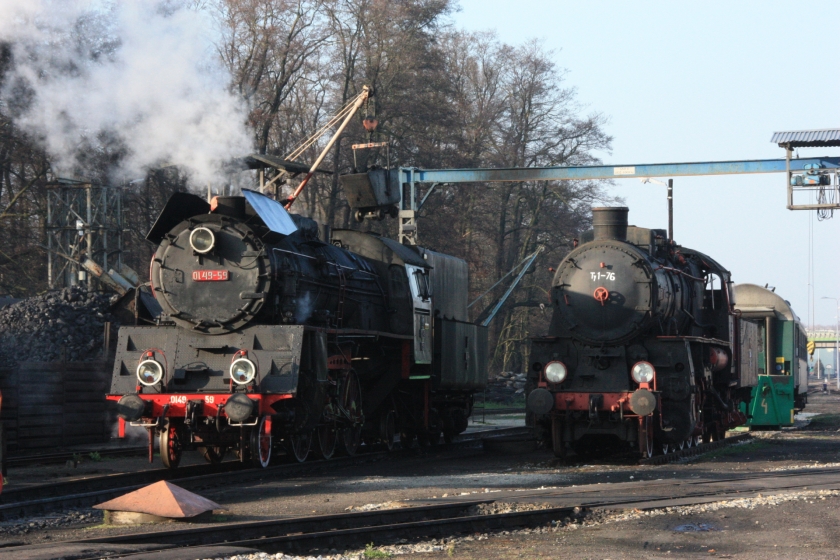 This Zbaszynek-bound service currently stops for around 15 minutes at Wolsztyn, which would be enough time for a steam working to take on water before continuing a journey that briefly takes it onto the Berlin-Warsaw main line between Zbaszyn and Zbaszynek. 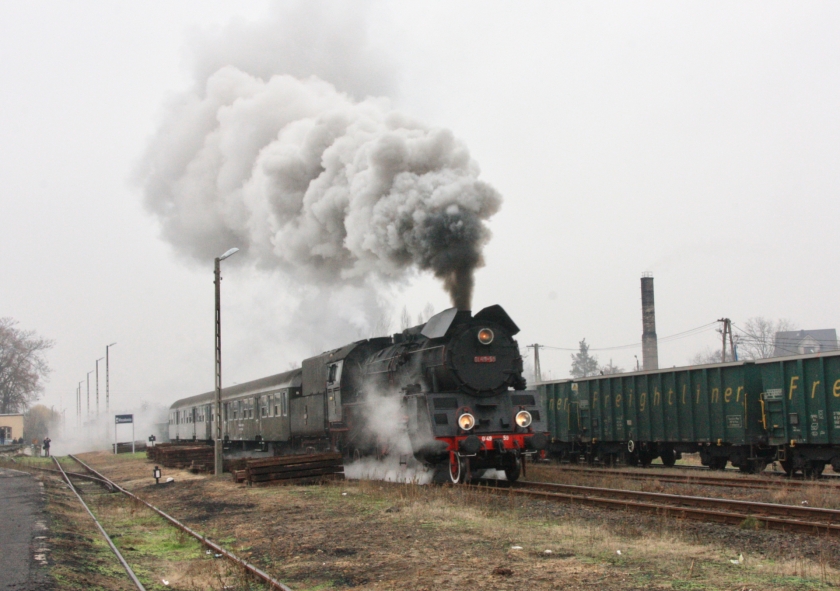 The northbound service currently departs Wolsztyn at 11.50 and at Zbaszynek makes the only viable connection of the day with one of the two-hourly Berlin-Warsaw expresses. This departs at 13.12, arriving in Berlin Hauptbahnhof at 15.16, giving ample time for a leisurely lunch in the restaurant car and then a flight back to the UK from Berlin.

Travelling to Wolsztyn via Berlin, the only viable connection of the day is out of the 14.37 from Hauptbahnhof, which gets to Zbaszynek at 16.44 to connect with the final railcar of the day to Wolsztyn at 17.15 (arriving 17.50).

Weekday services, and the two Saturday round trips from Wolsztyn to Poznan are currently being worked by 2-6-2 Ol49-59 while sister loco Ol49-69, which was a mainstay of services for much of the past year, is stopped for overhaul. 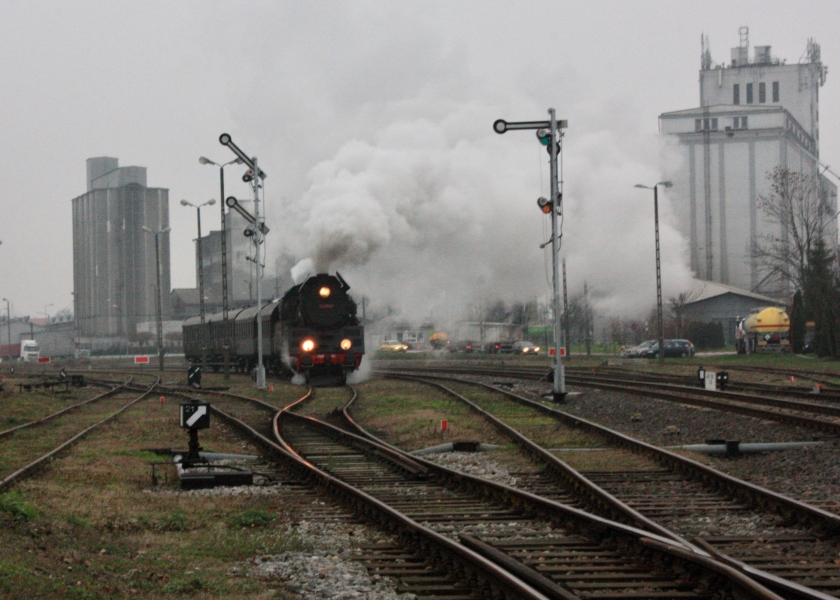 Ol49-59 departs Grodzisk with a special working of Wolsztyn depot’s four-wheel coaches to Poznan on 25 November 2019, in connection with a film shoot at Szreniawa

While 59’s current boiler certificate expires in May 2020, there are hopes that the depot’s third working loco, 2-8-2 Pt47-65, will be returning to traffic as soon as its tender has been returned to Wolsztyn from overhaul at Wagrowiec.

A chance to sample the world’s last main line steam working is far from expensive, with a Wolsztyn-Poznan return ticket costing less than £6.00 and giving you more than four hours and exactly 100 miles of real steam haulage.

These services run until 14 December 2019, after which there is a seasonal break in steam working over the Christmas period until early January.

For regular updates on Wolsztyn depot (in Polish and German) go to www.parowozy.com.pl and to read more about its world-renowned footplate experience opportunities, visit www.thewolsztynexperience.org