An enforced overnight stay in Berlin, as a result of easyjet cancelling most of its flights to and from London, gave me the chance on my return to the German capital by train from the Zittauer Schmalspurbahn to pay a visit to another of the narrow gauge lines in Saxony, the rather delightful Döllnitzbahn.

After the crowds travelling on the Zittau system it made a remarkable contrast to find myself as the only passenger on one of the services I took, which are essentially run for the benefit of local school children travelling into the town of Oschatz – midway between Dresden and Leipzig – from Mügeln and surrounding settlements.

When booking my rail travel from Berlin to Zittau some weeks earlier I had not been able to buy a discounted advance (Super Sparpreis) ticket for the return journey, so had ended up with a “Quer-Durchs-Land” day ticket costing €44 that offers unlimited travel after 09.00 on any regional trains throughout the country.

Working out that I could easily pay a visit to Oschatz en route to Berlin, and that my visit would be during the last week of the Saxony school term, meant a chance to take a diesel-hauled trip along the entire length of the route from Oschatz to Glossen, though not a spur to Kemmlitz.

Like the Zittau system, the 750mm gauge Döllnitzbahn is now run by a private company, Döllnitzbahn GmbH, which took over the route in November 1993 with the principal aim of securing the future of freight traffic from a kaolin mine at Kemmlitz to a transhipment point onto the standard gauge at Oschatz. 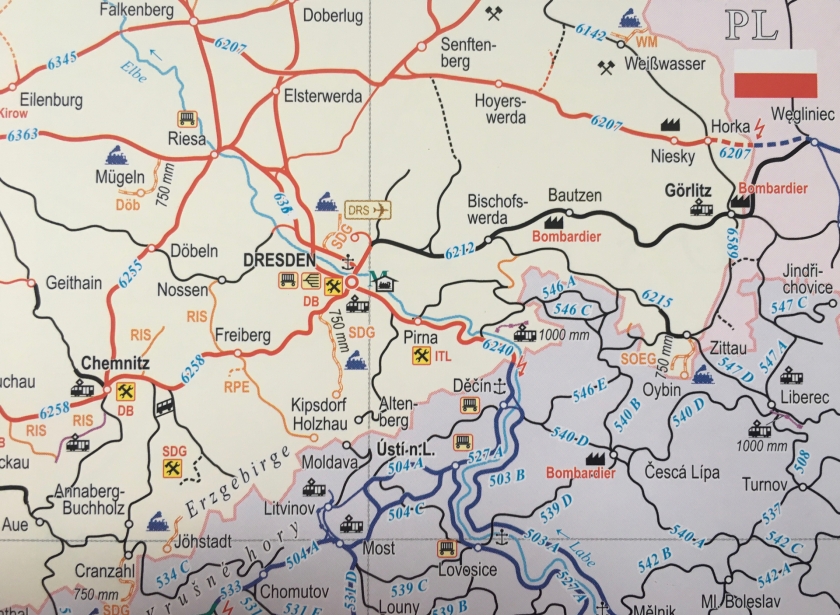 That traffic finally ceased in 2001 after which use of the surviving 18.7km (11¾-mile) system has been confined to school trains during term time and week-end tourist services, which on a limited number of weekends feature the line’s fleet of three vintage steam locomotives, 99 561/74/84.

Along with 99 555 at Zittau, this trio are some of the few remaining working examples of the powerful Saxon IV K 0-4-4-0 locomotives. A total of 96 were built by Sächsische Maschinenfabrik at Chemnitz between 1892 and 1921 and saw use on both passenger and freight services.

Such was their reliability that in 1962 the former Deutsche Reichsbahn (DR) began a modernisation programme for 20 of the 57 Saxon IV K locos that had survived WW2, including the fitting of welded boilers and frames.

What remains today was once part of a much larger 750mm network centred on Mügeln – which once boasted the largest narrow gauge station in Germany and one of the largest in Europe – which at its peak extended to almost 92kms (57 miles). 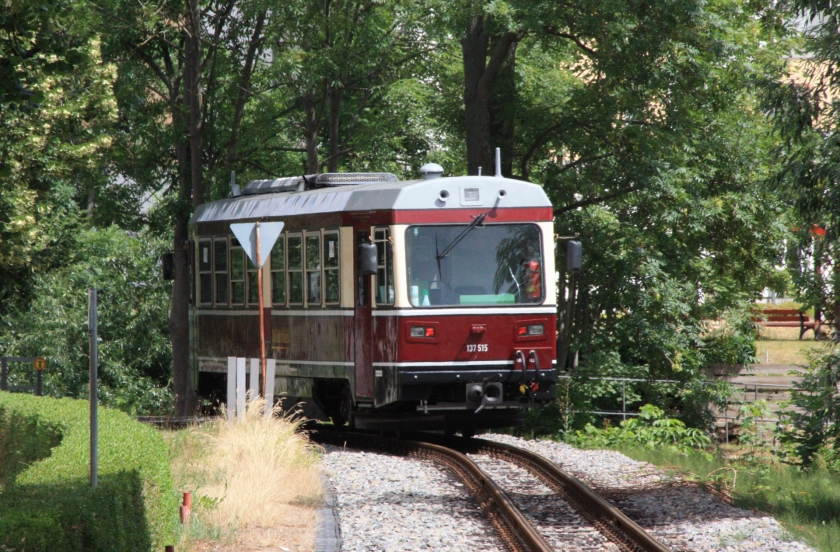 This principally comprised a Y-shaped network, with the line from Oschatz dividing at Mügeln, where a 19.9km southern route led to the town of Döbeln, another interchange point with the DR standard gauge, while a second 24km route headed west via the current terminus at Glossen to Wernsdorf and Neichen.

The route between Mügeln and Döbeln became one of the first of Saxony’s many narrow gauge lines to close when passenger traffic ended in December 1964, with freight traffic lasting another three years, and the line being dismantled in 1968. 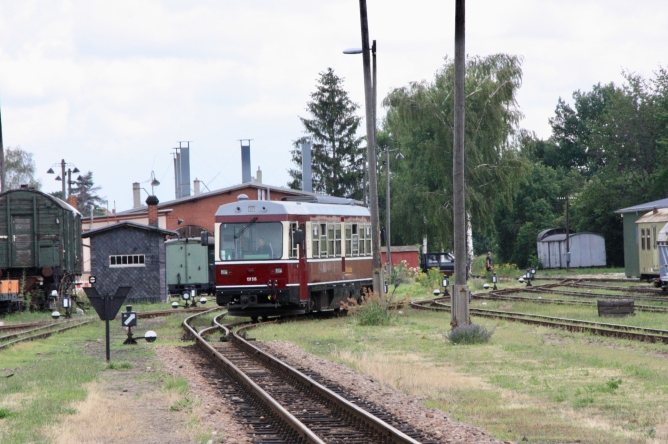 From Nebitzschen these trains travelled along the 2.7km stub of a former industrial route that had originally continued beyond Kemmlitz to Kroptewitz, being used for both kaolin and agricultural traffic, but also served between 1945 and 1964 by a short-lived passenger service. Freight traffic beyond Kemmlitz had ended in November 1967.

While the important kaolin traffic continued until 2001, passenger services between  Oschatz and  Mügeln were withdrawn in September 1975, before being restored two decades later, when school trains began running in 1995 to Oschatz from a station called Altmügeln, 1.3kms west of Mügeln.

In the late 1990s the new private owners of the Kemmlitz-Oschatz route, Döllnitzbahn GmbH, had plans to rebuild the line to Wermsdorf, but were unable to raise sufficient funding. However in 2005/6 a 1.6km section from Nebitzschen to Glossen was re-built with EU funding, re-opening to passengers on 21 April 2006.

Alas, on the day of my visit to the line all the steam and diesel locos were locked away inside the shed at Mügeln, and my journeys on the line were all aboard the most modern vehicle in the fleet, a comfortable 60-seater Austrian railcar VT 137 515, which dates from 1995.

A trip along the line

From its terminus at the south side of the main Oschatz DB station, the Döllnitzbahn runs south alongside a main road, where a disused stretch of dual gauge track remains (photo above),  towards the town centre a mile or so away, passing two request stops before reaching the main station, Oschatz Süd, about ten minutes after leaving the terminus.

The line then heads off across fairly flat and open country, passing small settlements and request stops in the villages of Naundorf and Schweta before reaching the extensive station complex at Mügeln around 25 minutes later. The line then bears right over a level crossing, passing through the small town before more rural landscape on the way to the junction at Nebitschen and finally to Glossen.

Regular Döllnitzbahn services are commendably integrated into the local transport system, so the €8.30 day ticket I bought was also valid on local buses and trains. I did not see the full extent of school traffic, but loadings during the day seem pretty light – there were only two of us aboard the 11.05 service from Oschatz to Mügeln (on 16 July 2020) and I was the only passenger on the 12.23 return. 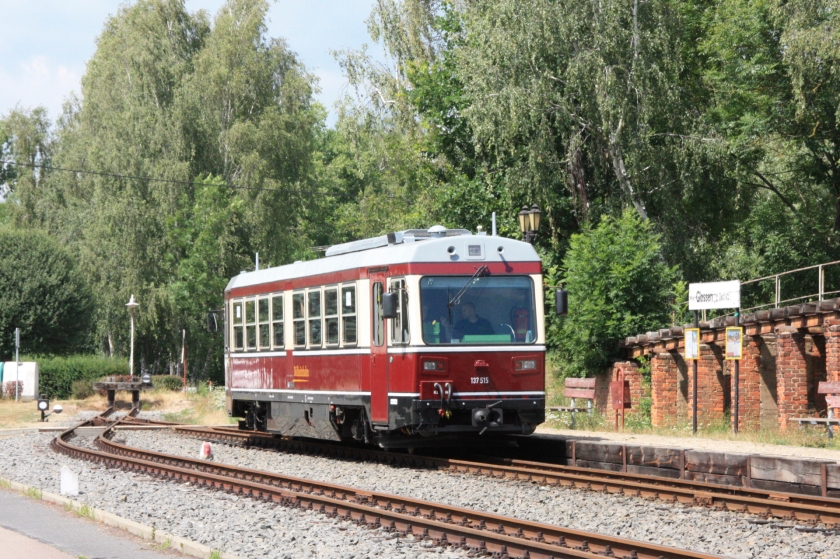 Things did pick up later though, and the 13.20 departure from Oschatz Süd was fairly well filled with some young families taking the chance for a short afternoon trip to Glossen (pictured above) and a sprinkling of schoolchildren, who later alighted at a number of the isolated halts along the journey.

For full details of Döllnitzbahn operating dates, timetables and fares (in English) go to www.doellnitzbahn.de My journey by rail from Oschatz to Berlin (Hauptbahnhof) using DB regional services, took almost exactly three hours, comprising a short trip to Riesa on a RE50 service, a half-hour wait there for a RB45 service to Elsterwerda, then a two-hour trip on a RE5 service to Berlin.