Parbold was a really delightful discovery in West Lancashire, a small town just over ten minutes travel time on a Southport-bound train from Wigan Wallgate, itself almost alongside the main Station, Wigan North Western, on the West Coast Main Line.

Here a listed 1877-vintage Lancashire & Yorkshire Railway box called Parbold Cabin, stands at the eastern end of the station and controls level crossing barriers and a trio of semaphore arms. 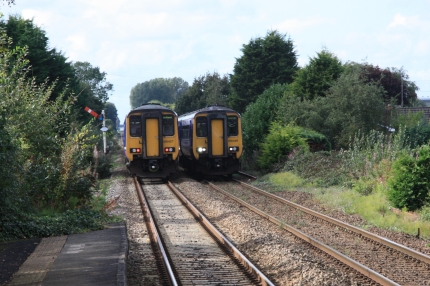 In the down (Southport) direction these are home signal (PB19) and starter (PB18 – pictured) while in the up direction home signal PB4 on the up platform is a colour light, but starter PB5 is a semaphore that is mounted above a distant controlled by nearby Chapel Lane Crossing.

This Crossing can be reached by taking a pleasant 15 minute walk along the Leeds and Liverpool Canal, which passes just south of the station. 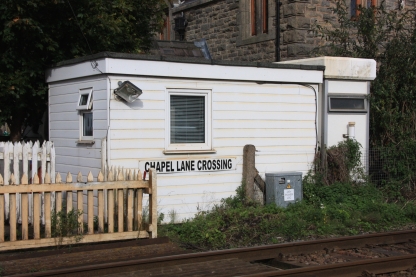 The box itself is little more than a Portacabin controlling gates on a farm track that remain closed to road vehicles unless a button is pressed to request they are opened, but this is another spot with photographic potential.

Here in the down direction is the Parbold distant below a home signal protecting the crossing, with another single home arm in the up direction.

That gives Chapel Lane Crossing three semaphores, the same as Parbold, although the two home signals protecting the crossing remain in the off position unless a vehicle has requested to cross the line.

Mid-way between the two boxes there is another fine vantage point from the bridge carrying the A5209 road.

Here there is a good view of Chapel Lane Crossing and its signals looking eastwards, while from the pavement side of the bridge, Parbold Cabin can be seen as the line sweeps round a left hand bend, with a good view of up trains approaching signal PB5.