At 01.04 on Saturday 11 November 2017, the 23.30 hrs Northern Rail service from Manchester Airport will draw into Platform 6 at Blackpool North station and go down in railway history as the last train to be signalled into the station by Blackpool North No. 2 Signal Box and its splendid semaphore signals. 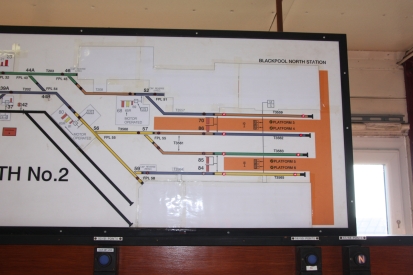 Once the empty stock has left the station, it will be closed for complete re-building, the signals and box demolished, and the 17.5-mile line from Preston shut to until next spring, as work begins in earnest on the route’s modernisation, electrification and re-signalling. This diagram inside the signal box shows the final truncated layout, with just four remaining platforms.

Readers of my earlier post (“A Signalman’s Farewell”) will know that a considerable amount of preparatory work had already been undertaken along the route in recent months, with the terminus reduced from eight platforms to four, a junction at Poulton-le-Fylde and fast lines at Kirkham & Wesham removed, while electrification masts have  been installed at the Preston end of the route.

But the Lancashire & Yorkshire Railway signal boxes have remained, along with some fine semaphore signalling along the three-miles of line between Blackpool and Poulton-le-Fylde, so this seems the right moment to pay a final photographic tribute as this significant piece of railway history meets its end.

Once the upgrading has been completed, which should be by May 2018, the new Blackpool North station will have six straight platforms, with platforms 1 & 2 being long enough to accommodate an 11-car Pendolino train, in order to allow an improvement in direct links between the resort and London Euston.

Among changes at Poulton-le-Fylde will be the installation of a facing cross-over east of the station, that would allow for the potential future restoration of services on the branch line to Fleetwood, with the current up platform being made bi-directional. On 15 June 2016, 150270 departs the station with a service for Huddersfield. 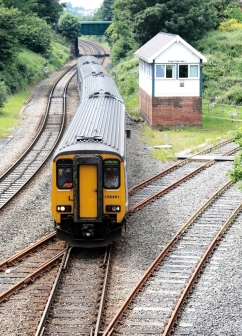 In preparatory work for the upgrade project, the double line junction for the Fleetwood branch was removed, despite never having seen a train across it. On 15 June 2016, Northern Rail 156491 passes the junction and Poulton No. 3 box with a service for Manchester Airport.

My thanks once again to the team at Network Rail who arranged a visit for me on 22 September 2017 to the signal boxes at Blackpool North, Carleton Crossing and Poulton-le-Fylde in connection with my forthcoming book on Britain’s last mechanical signalling.

Two final glimpses of the semaphore signals at Blackpool North on 22 September 2017. Pictured above is 142038 departing with the 10.21 service to Huddersfield, while below is a panoramic view of the truncated station complex, where 156491/428 wait to depart from platform 6 with the 10.40 service to Manchester Airport.