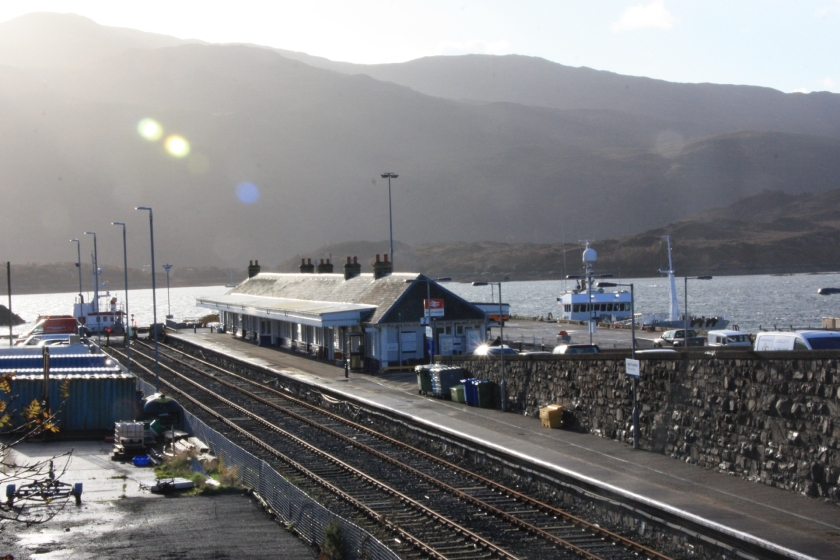 Tourists are pretty thin on the ground during November in the West Highlands so, ever anxious to avoid crowds, and taking the opportunity offered by ScotRail’s seasonal Club 50 £17.00 flat fare (remarkable value for a 514-mile round trip from Edinburgh) it seemed a good time to  make a long overdue return to Kyle of Lochalsh.

While the 82-mile route from Inverness has been hailed as the world’s most scenic rail journey, passenger numbers are distinctly modest out of the tourist season. I and my travelling companion were two of only ten passengers on board the 13.35 service from Inverness after leaving Dingwall on 14 November, with slightly more aboard the 12.08 ex-Kyle of Lochalsh a couple of days later.

Having some luck with the weather on both journeys gives you a chance to appreciate why this is such an acclaimed line, with the route heading west from Dingwall across empty and deserted moorland beneath rugged hills, before a spectacular section from Strathcarron to Plockton along the southern shore of Loch Carron.

Kyle of Lochalsh has a rather God-forsaken feel about it at this time of year, both the railway museum and the station’s acclaimed seafood restaurant being closed for the season, and the old slipway a reminder of the town’s past importance as a ferry port,  abruptly ended in October 1995 with opening of the Skye Bridge.

Pictured above is Scotrail 158720 approaching Dingwall on 14 November 2017 with the 12.08 Kyle of Lochalsh to Inverness service

With a day there in typical West Highland weather, it seemed worth venturing onto Skye,   and a day return on a Citylink coach to the island’s capital, Portree – one hour and 34 miles from Kyle – proved a great way to see some Skye scenery and to discover how extortionately priced the local beer is in Portree’s bars!

For an early evening excursion from Kyle, is is well worth venturing six miles back up the line to Plockton, a delightfully picturesque village at the end of Loch Carron, a tourist honey-pot during the summer and setting for the Hamish Macbeth TV drama series a few years ago.

Armed with a £3.50 day return, we took the 17.13 from Kyle and returned on the 20.18 from Plockton. The village is a brisk 15-minute walk from the station but, once there, the Plockton Inn is a very convivial watering hole and the local beer well worth sampling, and far cheaper than the beer on Skye!

Like the West Highland and North Highland lines, the Kyle route was converted to radio signalling 30 years ago. Four return services a day travel the line on weekdays (one on winter Sundays) and there are three remaining passing places along the line, each of which sees one scheduled crossing of trains – Strathcarron at 12.52, Achnasheen at 15.01 and finally Garve at 18.52.

As I discovered when waiting to photograph an arriving train, this part of the world does require some luck with the weather, which can change in a matter of minutes from bright sunshine to heavy downpour. Nevertheless, there is something rather special about a line that has survived numerous closure threats since the early 1960’s and is rightly acclaimed as one of the railway wonders of the world.