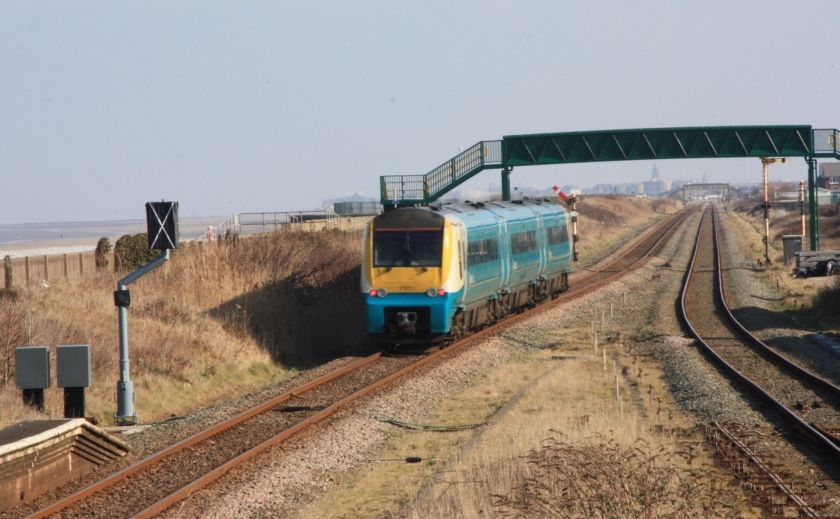 In less than three weeks’ time a key milestone will be reached in the £50 million North Wales Railway Upgrade, with closure of five mechanical signal boxes between Talacre and Abergele and the commissioning of new colour light signalling that will be controlled by the Railway Operating Centre in Cardiff. 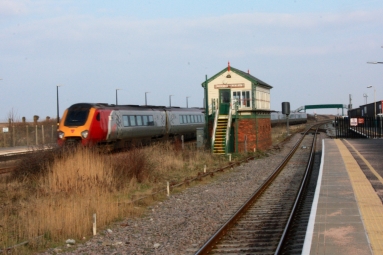 On the day of a visit last month to Rhyl No. 1 box (featured in my previous post) I was also fortunate to be able to visit two of the other doomed boxes, those at Abergele & Pensarn and at Prestatyn.

As with Rhyl No. 1, Abergele & Pensarn is another Grade II listed LNWR box, dating from 1902, which stands between the running lines at the eastern end of the Grade II listed, but unstaffed, station. 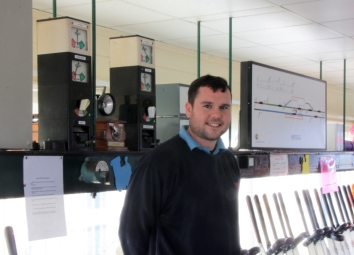 One noticeable feature of the upgrade programme here has been elimination of the former down platform loop by extending the platform forwards so that it is now served by what was formerly a down fast line.

Like Abergele, the 44 lever box at Prestatyn (LNWR 1897) also has just six working levers, amongst which up distant PN14 (pictured below) has the distinction of being one of only three remaining semaphore distant signals in North Wales, the others being at Ty Croes on Anglesey and a motor-worked example at Deganwy on the Llandudno Junction – Llandudno branch. 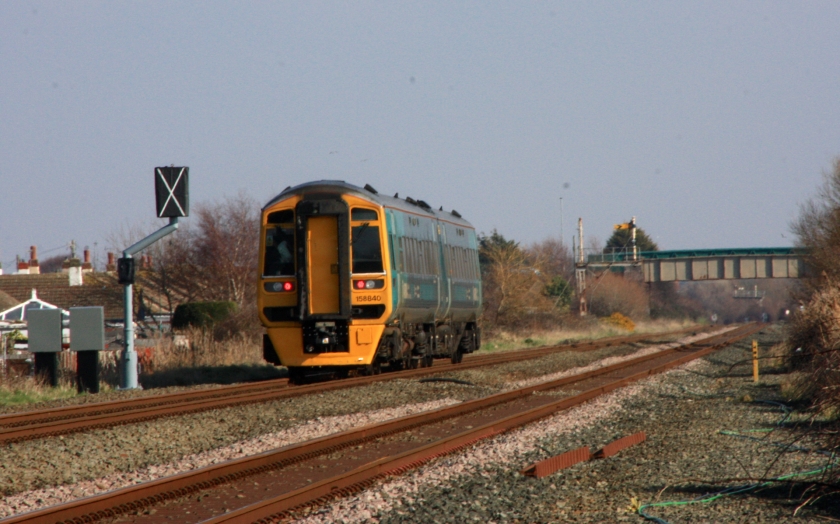 Prestatyn’s other remaining semaphores are up starter PN15, up section signal PN17 (pictured below), down home PN25 and down section signal PN23, with the sixth working lever being a colour light down distant PN26. 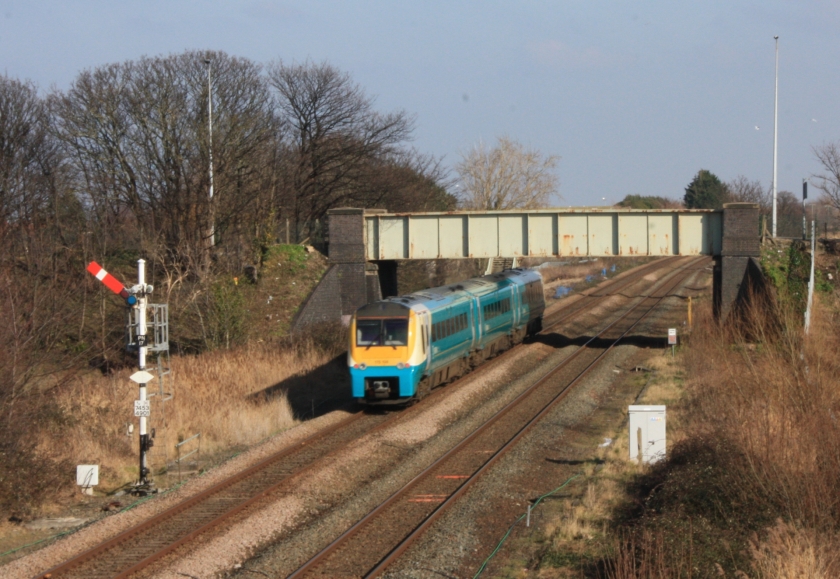 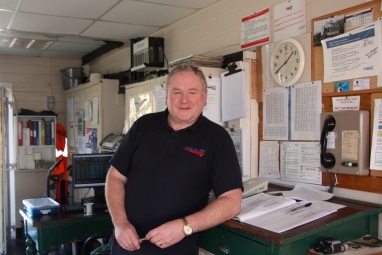 Veteran signaller, and a renowned chronicler of boxes along the North Wales coast, Alan Roberts (pictured) is one of those taking early retirement later this year. 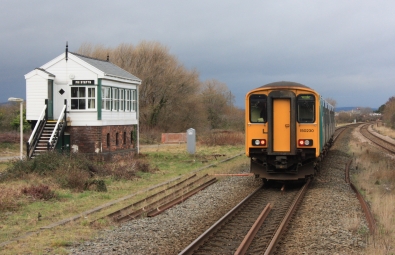 He has enjoyed a remarkable 42 year career in boxes covering a large section of the North Wales main line, all the way from Talacre to Gaerwen on Anglesey, and extensively recorded at http://www.6g.nwrail.org.uk 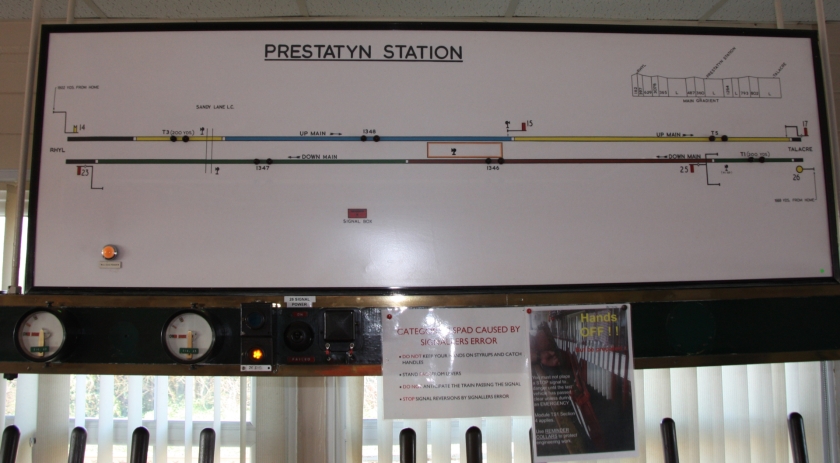 Once it has cleared Abergele the route will be closed until the early hours of Monday morning (26 March) for commissioning of the new signalling.

A view taken on a previous visit to Abergele on 1 February 2017 (below) where 67008 approaches with the 09.50 Manchester Piccadilly – Holyhead service. 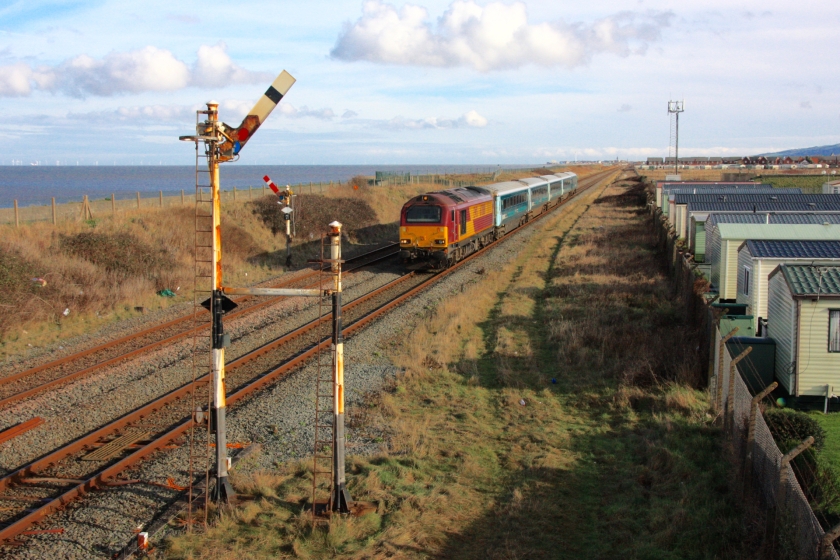 As mentioned in my Rhyl post, I am extremely grateful to Bryony Parry from Network Rail’s media team in Cardiff for organising my visit on 23 February 2018, to Programme Manager Richard Evans for his update, to Neil Bullimore, Mobile Operations Manager in Llandudno Junction for accompanying me and to the signallers I met – Mark Pendlebury at Rhyl, Gareth Edwards at Abergele and Alan Roberts at Prestatyn.