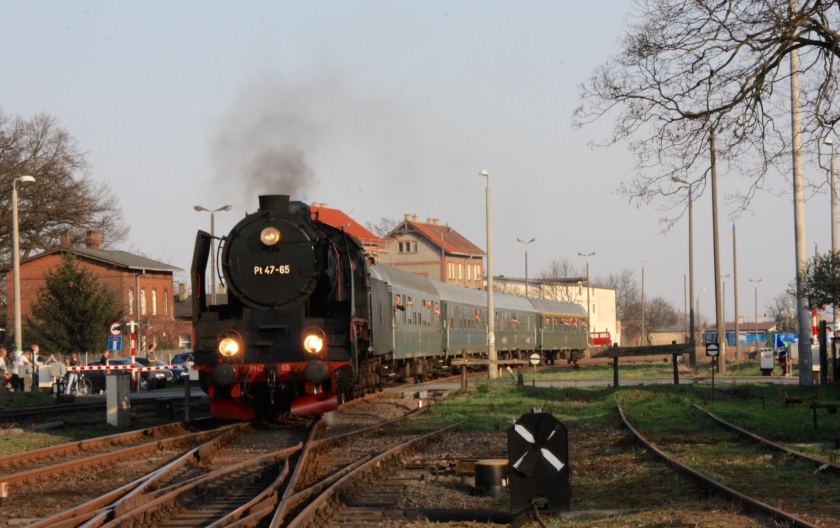 Poland has been totally transformed over the past three decades since the drab and sinister days of communist rule were overthrown by Lech Walesa and his brave shipyard workers, and nowhere is that change more evident than on PKP, the national railway network.

Pictured above is Pt47-65 arriving at Chełmża on 13 April 2018 during the first day of its trip to Hel and back.

Having been the last European country to retain steam traction, 1988 marked withdrawal of the last true main line class, the Pt47, with steam then rapidly disappearing over the next three years and eliminated entirely by 1992, except at the remarkable museum depot in Wolsztyn. 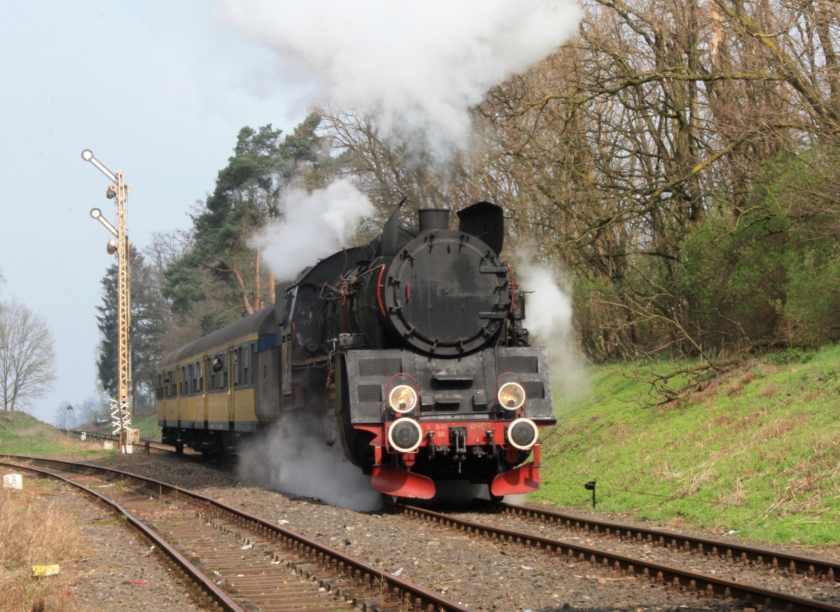 Another of the working Wolsztyn fleet is Ol49-69, seen above approaching Wolsztyn on 17 April 2018 with a special from Zbaszyn, after which it worked the regular 11.27 Wolsztyn-Leszno service.

The years from 1988 to the start of the new millennium were also marked by a Beeching-like axe of rural services across the country, with swathes of lines losing their passenger services during this period, although many have survived to this day, either “mothballed” or for occasional use by freight services. 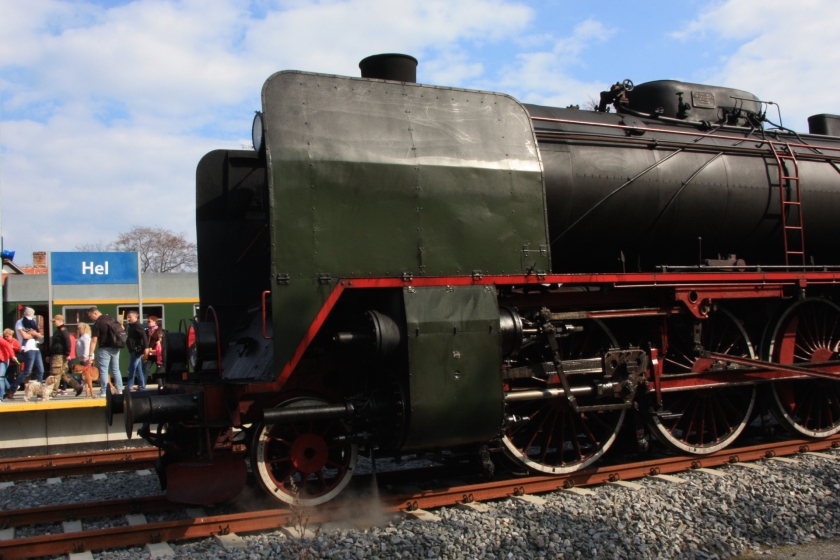 Shortly after their final withdrawal, two of the 180-strong class of Pt47 locomotives (Pt47-28/112) were returned to traffic and operated scheduled services in 1990 from a short-lived museum depot at Kłodzko to Wałbrzych in the scenic south of Poland, but it sadly did not last. 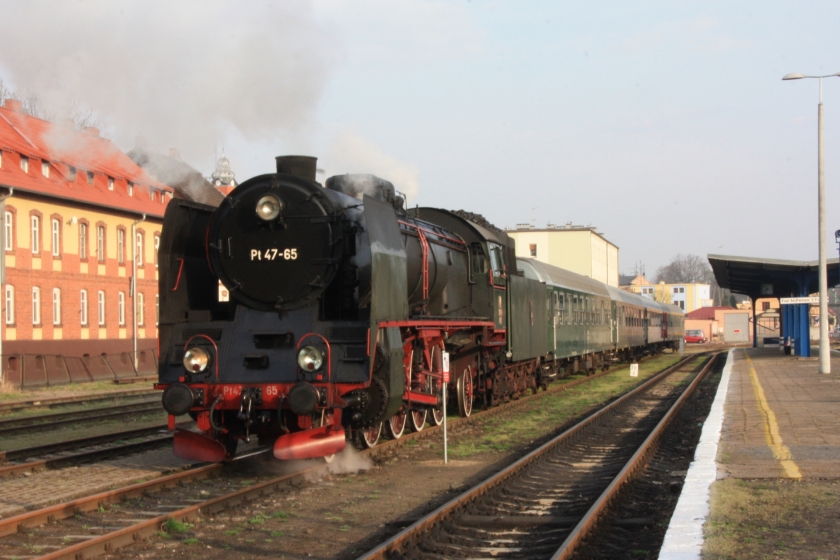 One of that pair (Pt47-112) was later transferred to Wolsztyn and remained operational until December 2008, before joining the lines of rusting hulks in the depot area.

But that was not the end for this class of powerful 2-8-2 “Mikado” locomotives. Another survivor, Pt47-65 was returned to traffic and also headed to Wolsztyn, where it enjoyed a new lease of life working the scheduled steam services to Poznan and Leszno. Pt47-65 was one of the 60 members of this class built by Chranzów in Poznań, completed in 1949. 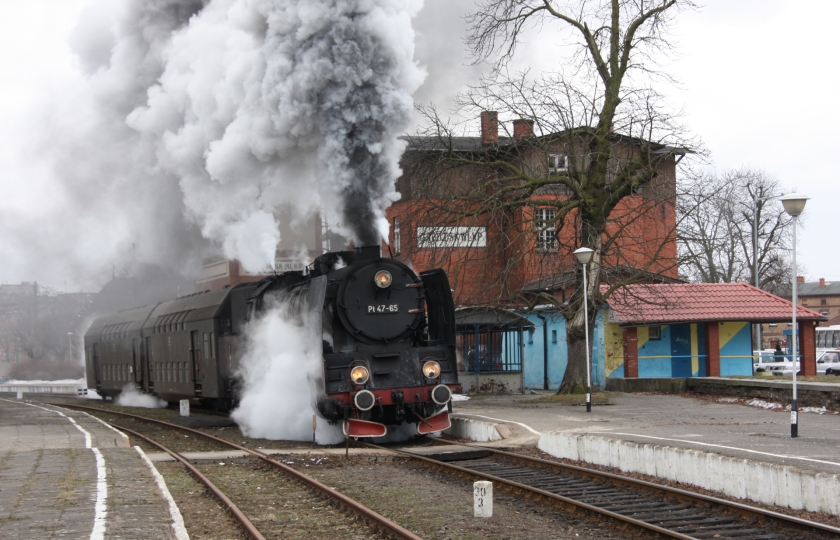 Olive green double decker coaches were the regular rolling stock for many years on the Wolsztyn-Poznań route. On 7 May 2010, Pt47-65 makes a dramatic departure from Grodzisk, the line’s principal intermediate station.

Its days looked to have ended when its boiler certificate expired after an appearance in the 2012 locomotive parade at Wolsztyn. But a four-year overhaul at the museum depot and works at Chabówka in southern Poland saw it returned to service at Wolsztyn, where it once again works scheduled and special trains alongside the depot’s other two working locos, Ol49-59/69. 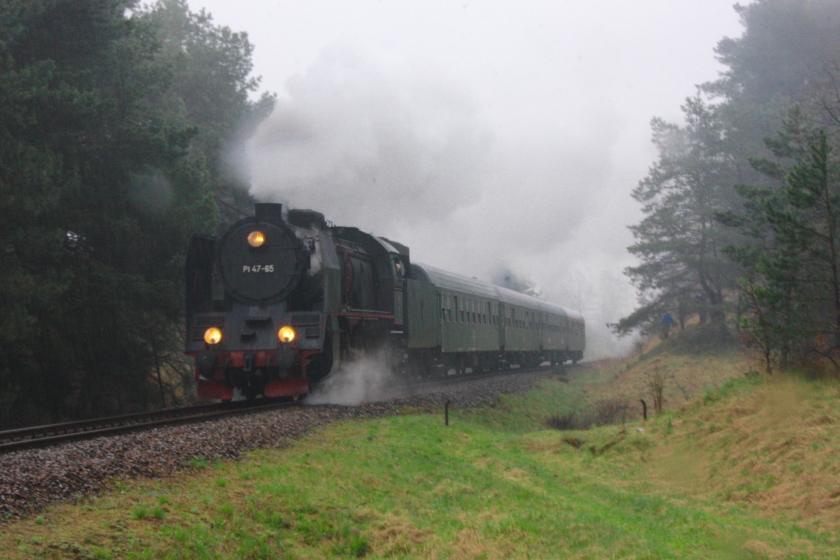 Heading south in dire weather conditions on 15 April 2018, Pt47-65 has just left Sępólno on the freight-only route from Chojnice to Nakło nad Notecią.

After its lengthy overhaul the loco’s current three year boiler certificate expires very shortly, but it remains in excellent condition, meaning there is every hope that its working life is not about to end.

So what better way to mark the 30th anniversary of the last Pt47s in regular service than join a four-day long special train, which Pt47-65 hauled faultlessly throughout, which followed a north-easterly route across Poland, from Poznań to Gdynia and then on to the fascinating Baltic Sea resort of Hel.

Hel stands at the end of a narrow 35km (22-mile) wooded isthmus, stretching out into the Baltic due north of Gdańsk and Gdynia. Regular railcars serve Hel all year round, with inter-city expresses also serving the line during the summer season. 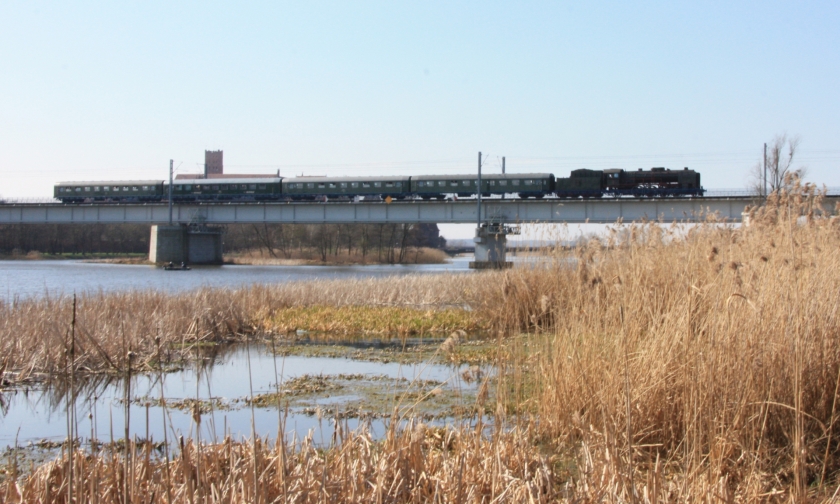 Pt47-65 passes Malbork Castle on its northward journey to Hel.

Our outward journey took us on the main electrified route north east via Gniezno and Toruń, before taking a secondary line northwards to the city of Grudziądz, whose main claim to fame seems to be having the smallest tram network (one 12km long line) of any Polish city.

After venturing to Hel on day two (14 April) the following day saw Pt47-65 haul its four-coach special to another Baltic Sea resort, Łeba. It stands at the end of a seasonally open 32km (20 mile) branch line from Lębork, and our arrival was just two weeks before the start of regular passenger services for the summer, which until June comprises a single long distance express service from and to Łódż.

A real highlight of the return from Kościerzyna to Poznań on day four (16 April) was a sedate run down the now freight-only routes from Chojnice to Nakło nad Notecią (PKP timetable 424) then on south to Gniezno (PKP timetable 389) through large and abandoned former junctions at Kcynia (pictured below) and Damasławek. 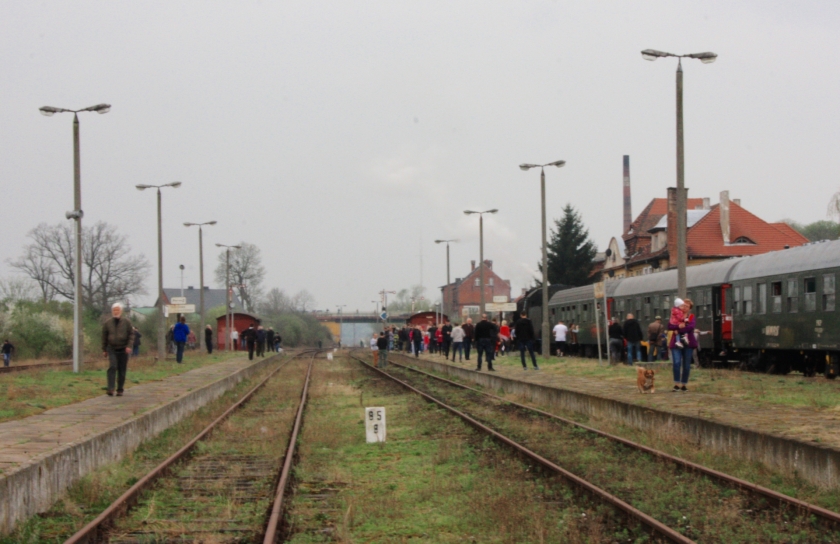 The second of these two freight-only routes – both having closed to passengers on 23 June 2000 – had particular significance for me.

On 17 October 1989, during my first ever visit to Poland, I was lucky enough to travel in the cab of Ty43-76 on the 14.45 service from Naklo to Gniezno, at a time when all services on the line remained in the hands of the Gniezno-based 2-10-0 locomotives.

The four-day 1190km (745-mile) trip to Hel and back was organised by Poznań-based tour operator Turkol (www.Turkol.pl), which runs a wide variety of special trains across Poland. It was supported by the Wolsztyn Experience (www.thewolsztynexperience.org) the 21-year old British group which has played a key role in sustaining regular steam working out of Wolsztyn depot.

Pictured below, Pt47-65 makes a spirited departure from Łeba on 15 April 2018 during day three of the trip to Hel and back. 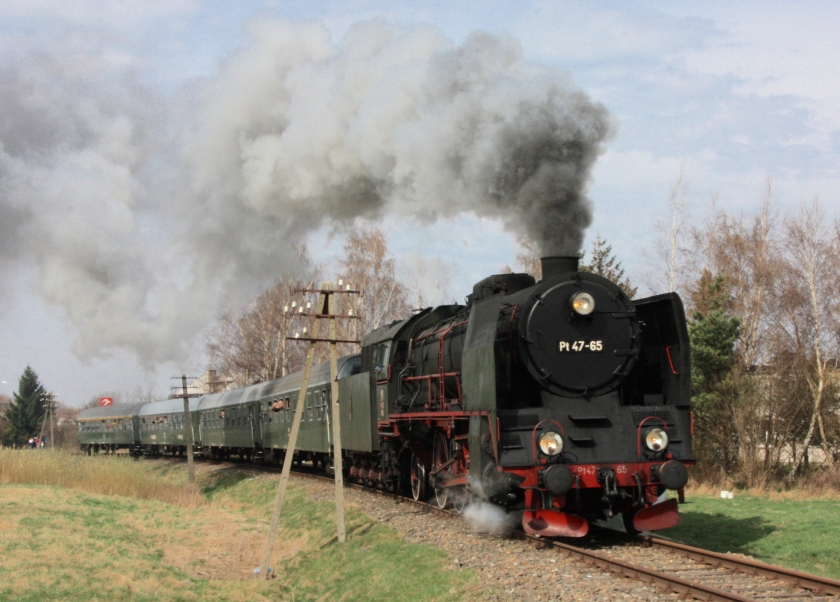