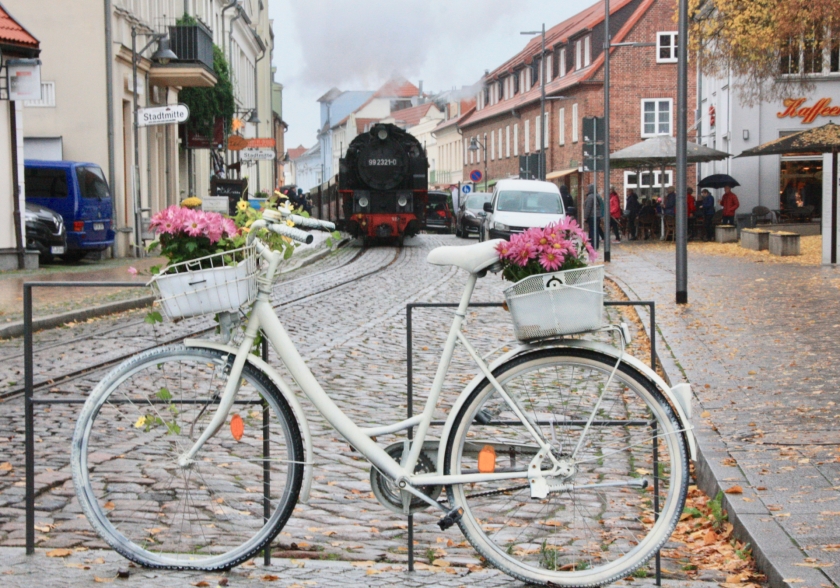 Last month’s return to the wonderful Harz metre-gauge network prompted me to pay a long-overdue first time visit to two more of the steam-worked narrow gauge railways in eastern Germany, both on the country’s attractive Baltic coast.

This charming duo is the 24km (14.5-mile) 750mm gauge Rügensche Bäderbahn (RBB) or Rasender Roland (“Raging Roland”), running along the south side of Rügen Island from Putbusto Göhren, and the 15.4km (9.6-mile) 900mm gauge Mecklenburgische Bäderbahn or Molllibahn (Molli), linking the town of Bad Doberan with the Baltic coast at Kühlungsborn West.

Both routes are now independently run by local companies, they are both entirely steam-worked, and both seem remarkably popular, if my few days visiting the area in mid-October are a reliable guide.

Travelling to the Baltic coast by public transport proved remarkably straightforward. One option would have been to take the train north from Berlin to Putbus, via Stralsund and Bergen auf Rügen, a journey of four hours. 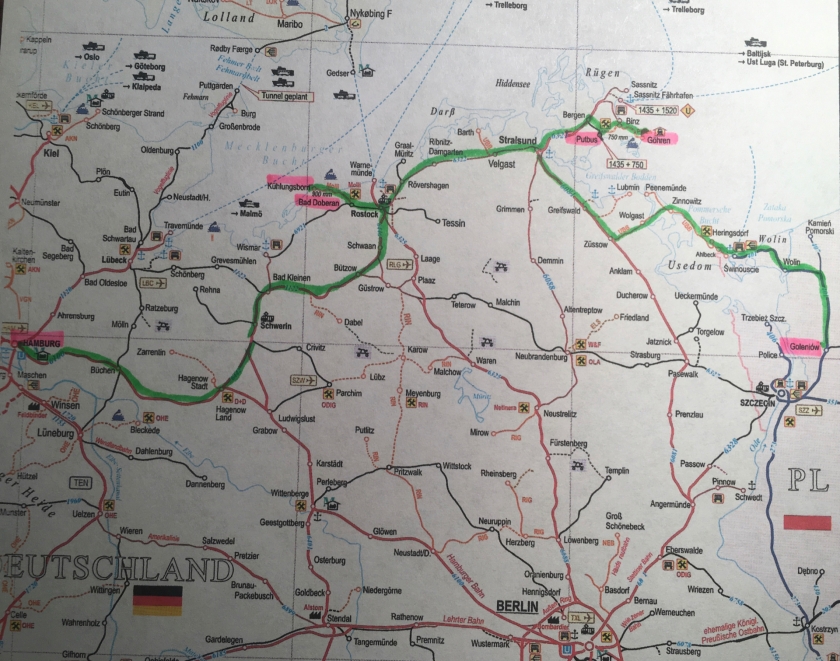 Instead, I consulted my European rail atlas and took a Ryanair flight from Stansted to the Polish city of Szczecin, in the far north-west of the country, and continued on from there by train, crossing the northern part of Germany to eventually reach Hamburg, and fly home from there at the end of the week.

Being Ryanair, Szczecin Airport is nowhere near Szczecin, but is actually some 45 kms (28 miles) north-east of the city, near the small town of Goleniów. 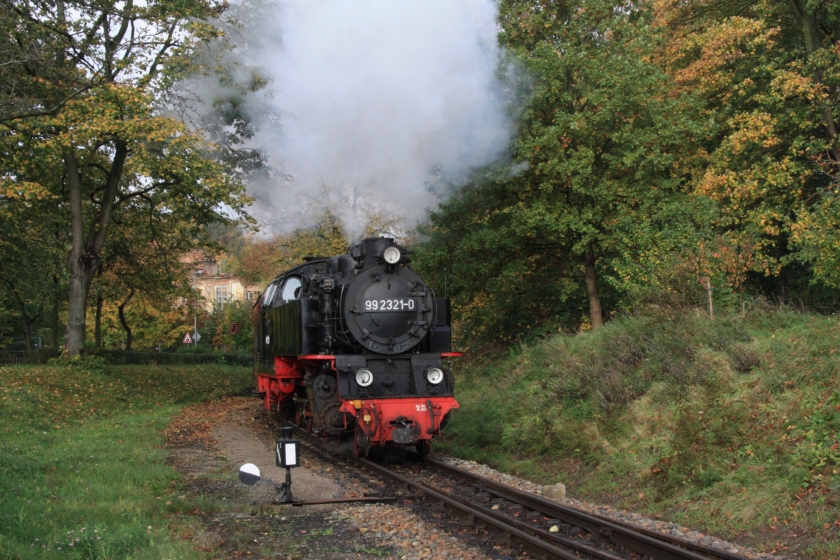 Rather than pay for an expensive transfer and hotel in Szczecin, I opted to stay a night in Goleniów, just 5 kms (3 miles) away, then caught a Polish local train to the Baltic port city of Świnoujście the following morning, a journey of just over an hour (50 miles) that cost me a modest PLN 12.82 (£2.70).

Świnoujście is an interesting city standing on both sides of the River Świna. With no road link between the two halves of the city, and the larger western part totally disconnected from the rest of Poland, a free ferry links the city’s two parts until a planned road tunnel under the river is finally opened.

Arriving at the main rail station in Świnoujście with limited time to make my connection (09.26 – 10.17) it was reassuring to see that the ferry terminal was across the road from the station and one of the three ro-ro ferries that ply the river was already half way to its eastern terminal.

Once in the isolated western part of the city after a scenic ferry trip, it is a brisk (and un-signed) 20-minute walk to another station, Świnoujście Centrum, which is served exclusively by German trains, as the border at Ahlbeck is less than a mile away. 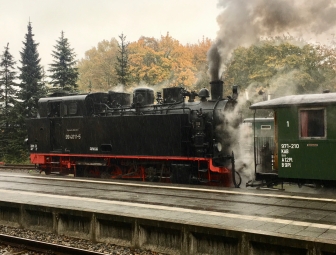 From Świnoujście Centrum, my 3½-hour rail journey to Putbus involved two changes (at Stralsund Hbf and Bergen auf Rügen), but connections were well timed and my whole journey was covered by a one-day regional unlimited travel Mecklenburg-Vorpommern-ticket costing €23.00.

A final leg of this journey from the junction station of Bergen auf Rügen was aboard a single unit railcar run by the private operator Pressnitzalbahn, operating almost hourly from the junction to an interchange with the RBB at Putbus and then on a 2.8km (1¾-mile) section of dual gauge track to Lauterbach Mole. 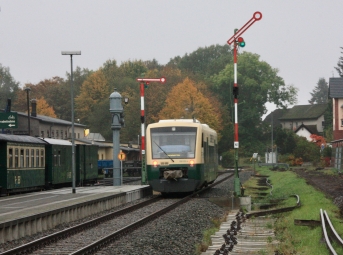 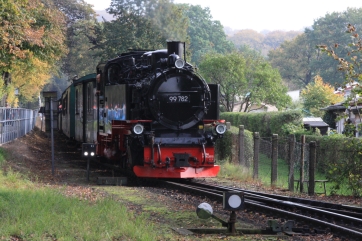 This is a pleasantly rural line, which links a number of popular sea resorts at the eastern end of the route, between Binz and Göhren, and consequently attracts huge numbers of holidaymakers, hikers, cyclists and coach parties.

One of the advantages of the day Mecklenurg-Vorpommern day ticket is the ability to change your schedule at will. So when the weather became dull and gloomy I decided to change the plans I had to travel directly from Putbus on to Bad Doberan and complete a rail tour of Rügen Island. 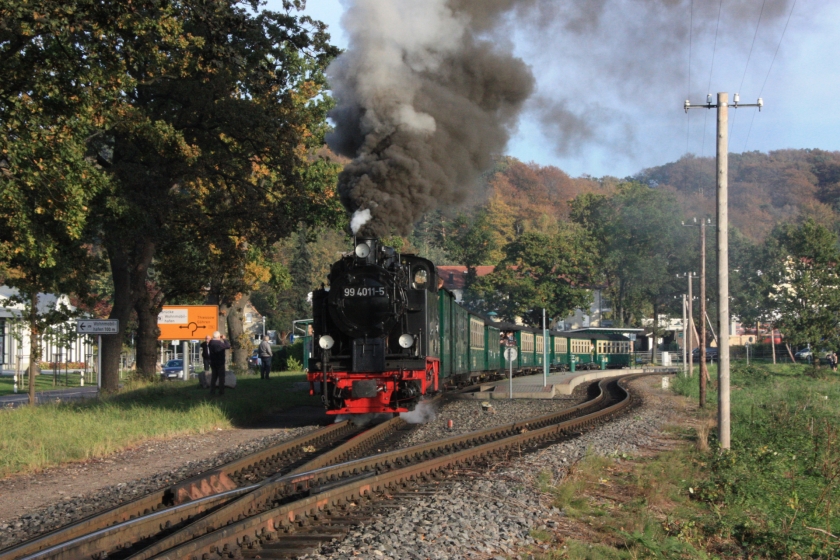 So escaping from the crowded first RBB train of the day (09.53 ex-Göhren) I alighted at Binz – below – and took a 20-minute walk to the resort’s main rail station, Ostseebad Binz. 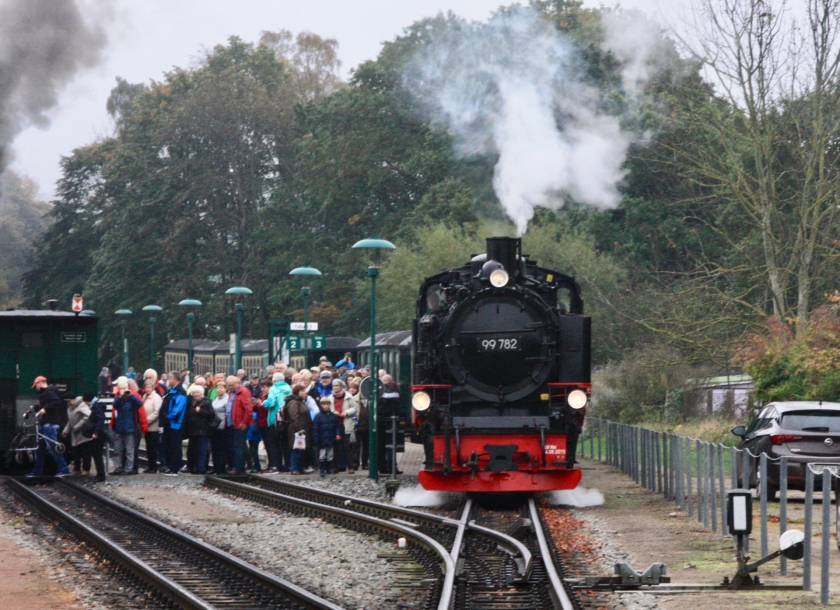 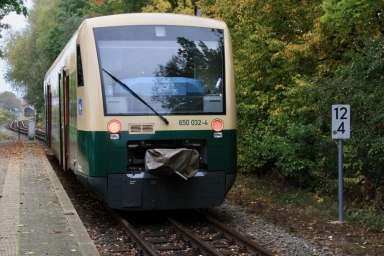 From there I headed for Putbus by changing again at Bergen auf Rügen and having time to go to the terminus at Lauterbach Mole before returning to Putbus in time to photograph the arriving RBB service.

After a lunch break I then returned to Bergen auf Rügen and completed my Rügen mileage with a trip to the other terminus station on the island at Sassnitz, Germany’s most north-easterly station and, like preceding station Lancken, an unexpected outpost of semaphore signalling. 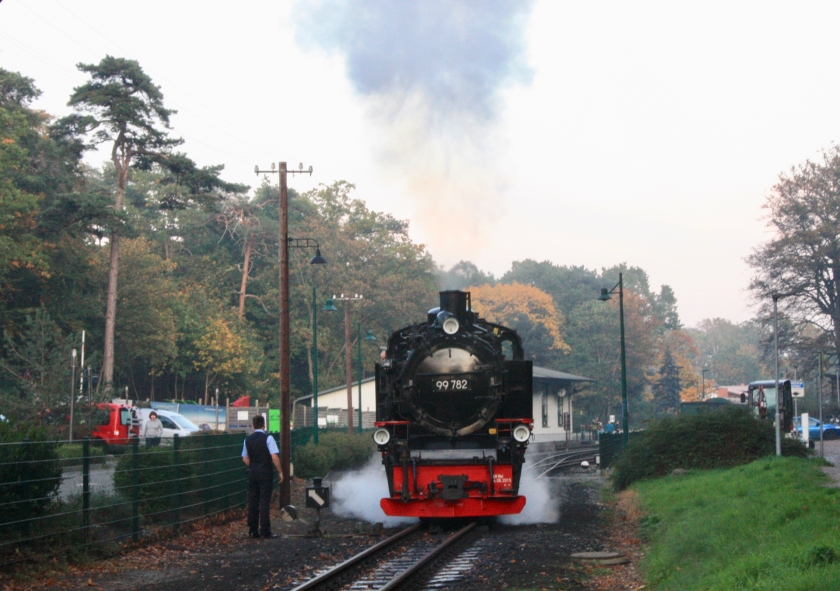 Rügen is Germany’s largest island and is connected to the mainland by a causeway and high level road bridge near Stralsund.

It once boasted an extensive narrow gauge network, and still has major railway significance as the port of Sassnitz-Mukran deals with more sea borne rail-freight (links to St. Petersburg and Trelleborg) than any other German port and is the only one in Europe that can handle both broad (Russian) gauge and standard gauge rolling stock. 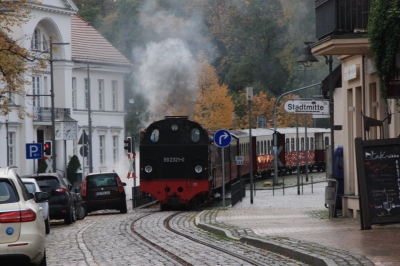 Moving on westwards, and just beyond the city of Rostock, the Molli is another delightfully rural line, which begins with its famous street run through the centre of Bad Doberan before heading north-west to the coast at Kühlungsborn, a place with no less than three stations on the line.

An hourly service operates in the summer timetable ending 3 November, with a two-hourly service during the winter. Trains cross at Heiligendamm, one of three stations – the others being Kühlungsborn Ost and West – which boast a pleasant bar/restaurant, but the only place with semaphore signals. 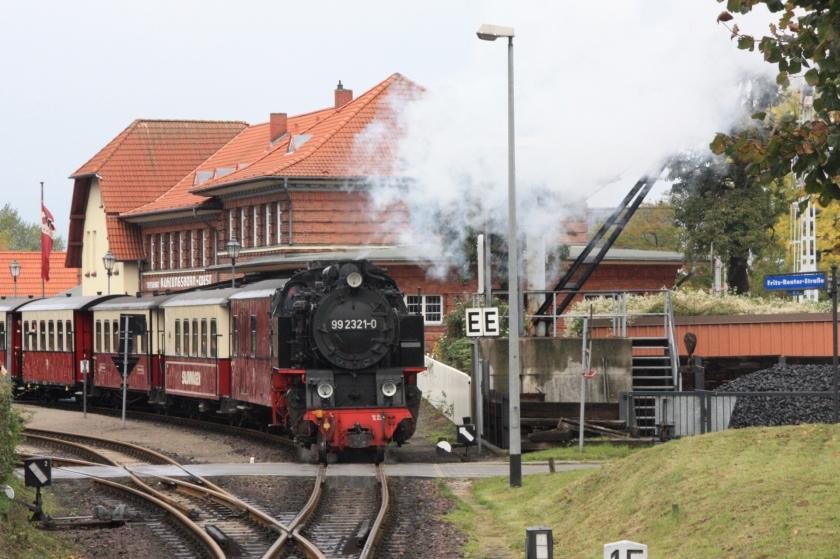 Arriving at my hotel adjacent to one of the two stops in Bad Doberan town centre it was noticeable how lightly loaded were early morning and late afternoon trains. But that was deceptive, with trains for the rest of the day attracting large numbers of passengers, including more coach parties. 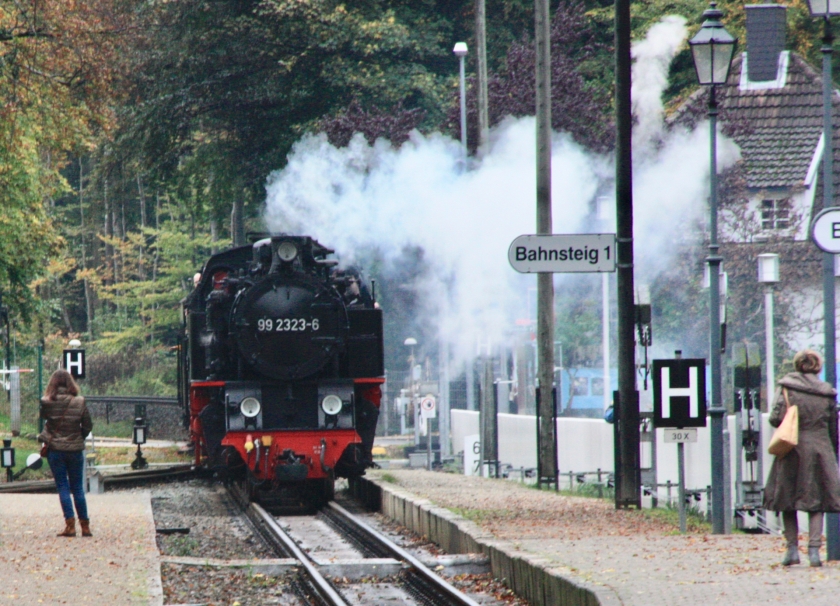 Services during my two days on the Molli were in the hands of 2-8-2T locos 99-2321/3, two of a fleet of three powerful tank engines built by Orenstein & Koppel for Deutsche Reichsbahn and delivered in 1932. 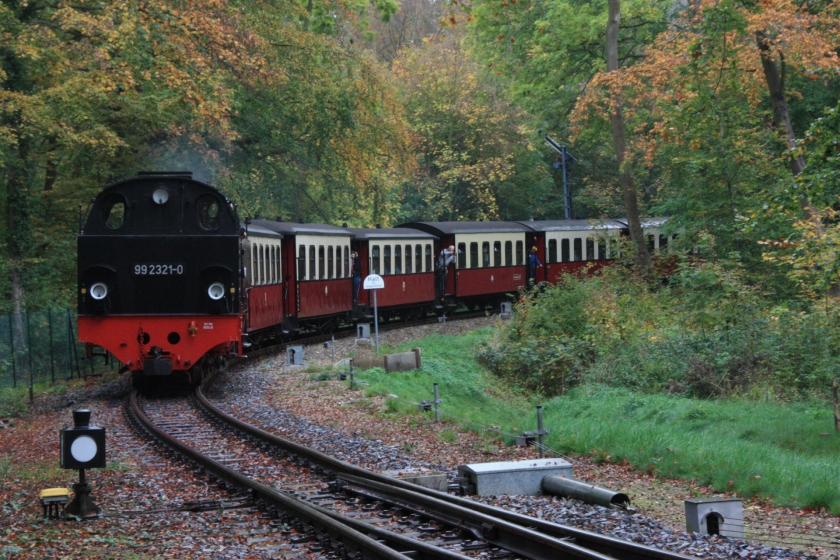 This view (above) shows 99-2321 passing the northbound home signal at Heiligendamm on 17 October 2019 with the 14.36 from Bad Doberan, while below is a view of the modest four lever signalling frame in the station, with this signal in the off position and points controlled by the blue levers on the right. 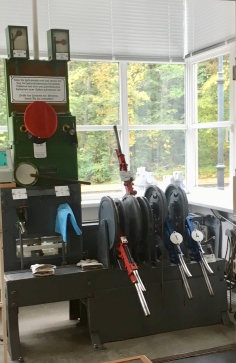 One of the few irritating aspects of DB, which extends to both the RBB and the Molli, is the lack of free station toilets. There seems a universal, charge of €0.50, with access through doors that will only accept a 50 cent coin, so hard luck if you don’t happen to have one. 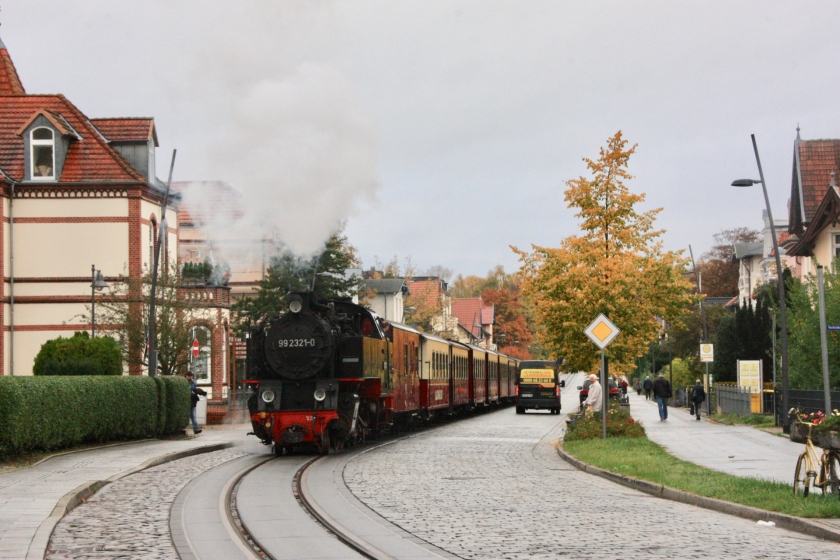 Another facet of life I found extraordinary in Mecklenburg-Vorpommern is that smoking is still allowed in bars. Forget all that stuff about the Germans being a healthy lot, if my experience of the station bar at Ostseebad Binz and another in the centre of Bad Doberan is any guide! 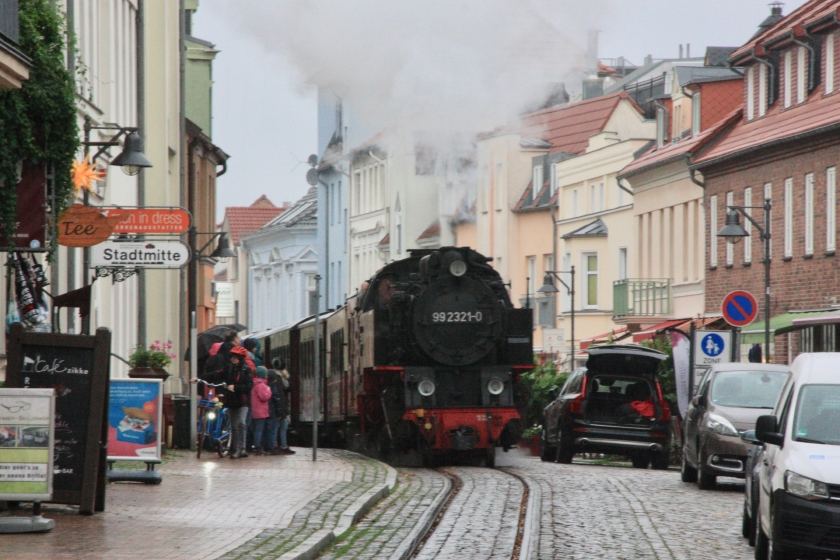 *My Ryanair flight from Stansted to Szczecin cost £24.55 and from Hamburg to Stansted I paid €26.00 (£23.20) in both cases those fares included priority boarding (two cabin bags)

In Goleniów I stayed in a very comfortable place called Central Apartments, which I found through Booking.com and cost PLN 219 (£44.70) with the apartment owners arranging a pick up for me from the airport for €10.00.

In Göhren I stayed in the Hotel Berliner Bar, a 10-minute walk from the RBB station, which was also comfortable and cost €42.00 (room only).

Finally, in Bad Doberan I stayed in the excellent Hotel Doberaner Hof, immediately adjacent to the Molli’s Stadmitte (town centre) stop and pictured below, where I paid €64.00 a night for bed and breakfast. 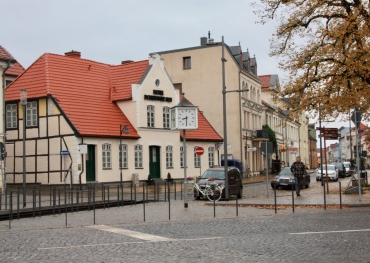 My travel from Świnoujście to Putbus and later from Ostseebad Binz to Bad Doberan was done using one-day Mecklenburg-Vorpommern tickets costing €23.00 each (and €4.00 for any additional adult).

It is possible to use a MV ticket to travel from Bad Doberan to Hamburg using RE services, but I opted for a “Super Sparpreis” ticket to travel on a faster IC service for €25.90. All my German travel tickets (except narrow gauge) were booked at www.bahn.de 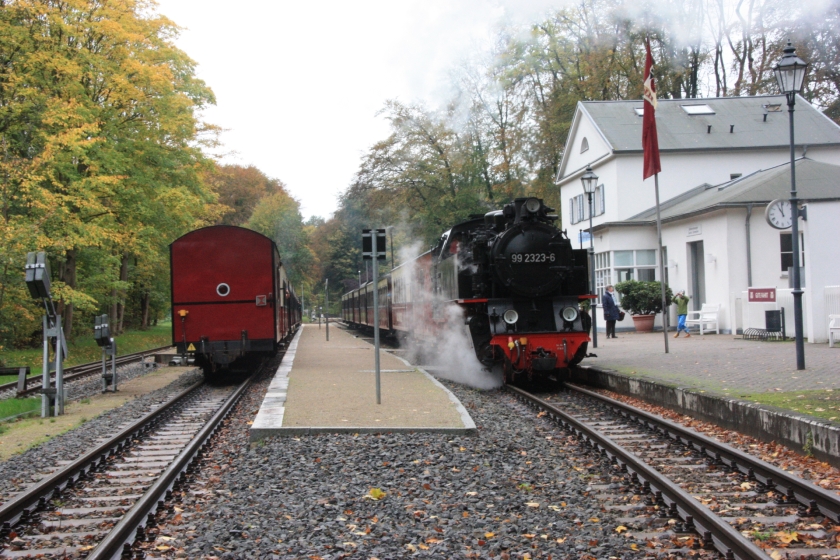 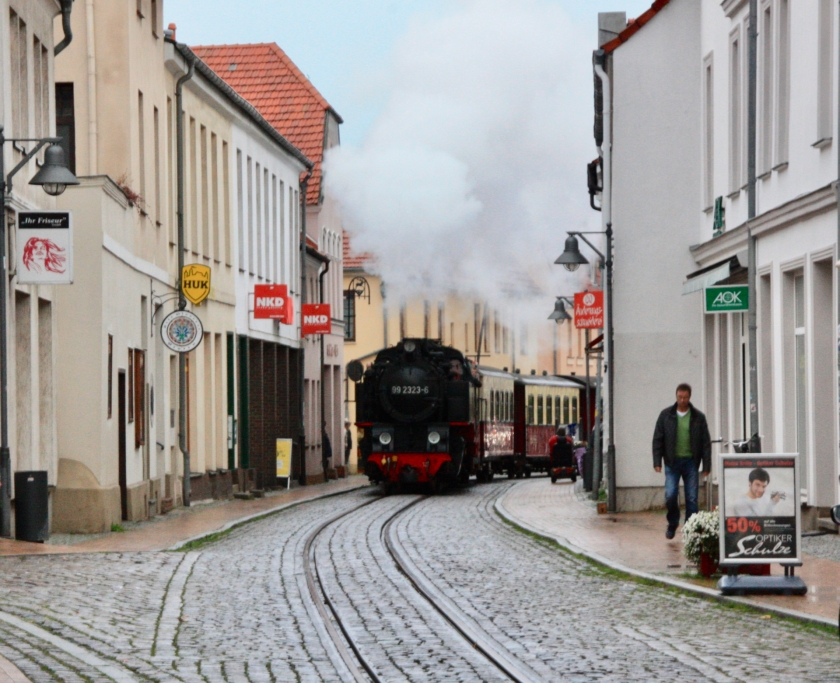 The Molli also works on fare zones, with a three-zone end-to-end return costing €15.50 and a two-zone return from Bad Doberan to Heiligendamm costing €10.50. There is no day ticket, but these fares allow you to alight and break your journey at intermediate stations. 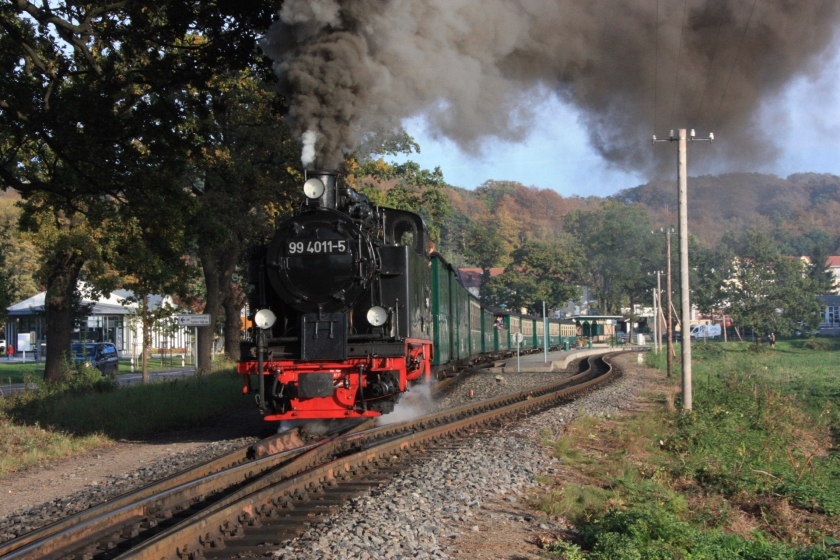