It became a byword for violent disorder during three years of devastating civil war between 1992 and 1995 and the massacre that took place during that bloody conflict, but the industrial town of Tuzla, in north-eastern Bosnia-Hercegovina has acquired a new distinction, as home to the last working industrial steam locomotives anywhere in Europe.

At a small workshop, next to a closed-down coal mine on the western outskirts of the town, Merim Alicic and his small team of skilled engineers are fabricating new cylinders and other components that are needed to keep a five-strong fleet of huge World War Two-era steam locomotives on the rails. 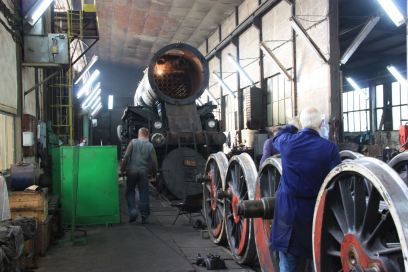 Alicic and his team were nearing the end of a nine-month rebuild of one locomotive, No. 33-064 – and he proudly shows visitors the original German technical drawings of the locomotive, which date back to its construction in 1943.

Wind the clock forward by some 70 years to 2012, and these 80-tonne locomotives are still being used every day to move the huge loads of coal that are used to fire the enormous power plant that dominates the skyline of this drab, and otherwise un-remarkable, industrial town.

Parts off-the-shelf are simply not an option, so anything in need of replacement has to be tortuously re-created from scratch in the workshops. But following its total overhaul, and the replacement of key components with parts manufactured in the tiny workshop, 33-064 should be good for another three years’ service with the Kreka mines company.

This loco – and the four others still in service with the Kreka mines company – are lovingly maintained by Alicic and his team at the Bukinje depot and can rightly claim to be the very last mainline steam locomotives genuinely working anywhere in Europe, apart from those that preserved or kept on the rails as tourist attractions. Paying a return visit in September 2013, it was good to see that work on 33-064 had been completed:

These five locos are the last working examples of some 7,000 “Kriegsloks”, (War locomotives), originally built for use on the Eastern Front in the Second World War, one of the largest fleets of steam locomotives ever built, and which became synonymous with that era, featuring in “Schindler’s List” and countless other WWII films.

For more than four decades that followed the end of the war in Europe in 1945, Kriegsloks were a mainstay of rail freight haulage throughout the divided Germany and across the Eastern Bloc, finally disappearing from East Germany in the late 1980s and Poland in the early 1990s.

Their continued use today in the Tuzla area is a matter of simple economics: the Kreka mines company would like to replace them with diesels, but simply cannot afford the €2 million price tag which even a second-hand a diesel capable of hauling 1,500 tonne coal trains would cost.

So, for the moment at least, the survival of steam looks relatively secure, and its uniqueness is attracting a steady flow of overseas visitors to an area yet to tap into the potential profits to be made from international tourism.

Meantime, crews on the Kriegslok fleet seem better than most in this region at practising a few words of English, and are only too willing to offer a precious ride in the cab of their locomotive in exchange for the cost of a couple of beers.