Where is the international airport whose rail link is only served by steam-hauled trains? It may sound like a rather fanciful question, but the answer is Ronaldsway on the Isle of Man, where a modest airport halt stands behind an industrial estate, some 300 yards from the airport terminal, mid-way along the 15-mile route from Peel to Port Erin. The regular steam-hauled trains stop on request to the guard, or by making a hand signal to the driver.

I know this to be true because I alighted there myself at the end of a brief three-day visit in May 2013 to this fantastic island, with its three separate rail systems (four if you include the horse-drawn trams), all Government-owned and for an inclusive fare (a three-day Island Explorer ticket cost me £32.00) offering a marvellous way to explore all corners of the island.

The challenge I set myself over three days was to cover the travel the entire rail system – the Isle of Man Railway (Douglas-Port Erin), the Manx Electric Railway (Douglas-Ramsey) and the Snaefell Mountain Railway (Laxey-Snaefell), getting as many decent photos as possible. Rather than base myself in Douglas, I opted for the southern end of the Isle of Man Railway, where the Falcon’s Nest Hotel is less than five minutes’ walk from Port Erin railway station.

My travels begin on day one (Friday, 17 May 2013) with a bus ride from the airport into Douglas (there being no convenient train) and another bus along the promenade to the southern terminus of the Manx Electric Railway (MER). I had hoped to travel up Snaefell today, but unexpectedly fine weather means that when MER Car 16 reaches Laxey, the Snaefull Mountain Railway tram is already full. Instead I opt to continue the spectacular journey on to Ramsey, returning later in what feels like near-freezing conditions in an open tramcar.

After an afternoon sightseeing with the friend of a former colleague living on the island, day two (Saturday, 18 May 2013) dawns and the weather forecast is pretty dire, with heavy rain expected for most of the day. Having been thwarted yesterday, my plan is to take buses to Laxey to ensure that I am there in time to get my trip up Snaefell. Bus 2 gets me to Douglas in 45 minutes, leaving enough time to photograph steam loco no. 10 departing Douglas before taking bus 3 to Laxey and boarding Snaefell Mountain Railway car no. 1 for a trip up the mountain. 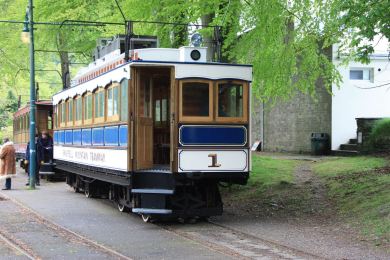 There is almost no visibility on the way up and it is raining heavily by the time we get to the summit, where everyone on board goes straight into the restaurant building to get out of the appalling weather. Our journey down is slightly delayed, but I am in time for a return bus to Douglas – a double decker this time, though I can’t see much from my front seat upstairs.

Finally, on day three (Sunday, 19 May) the weather has improved and I am keen to get more photos of the steam locos, so take bus 2 to Ballasalla and wait for the trains to appear. I get shots of tranquil station, no.12 arriving bunker-first from Port Erin and then no. 10 arriving from Douglas. Board the train to Port Erin and I return to the hotel to check out, before returning to the station and catching the 11.50 to Douglas.

Back in Douglas there is time for a welcome pint of Okells bitter in a nearby pub before a short trip to the request stop at Santon, where the locomotive crew are happy to wait while I cross the line to get a shot of the departing train. Wait 20 minutes for a train back to Douglas and another beery interlude before my final journey, on the 15.53 service to Port Erin. This makes the stop I have requested at Ronaldsway Halt (16.23), in plenty of time for a short walk to the airport terminal and my 17.35 flight to Gatwick. 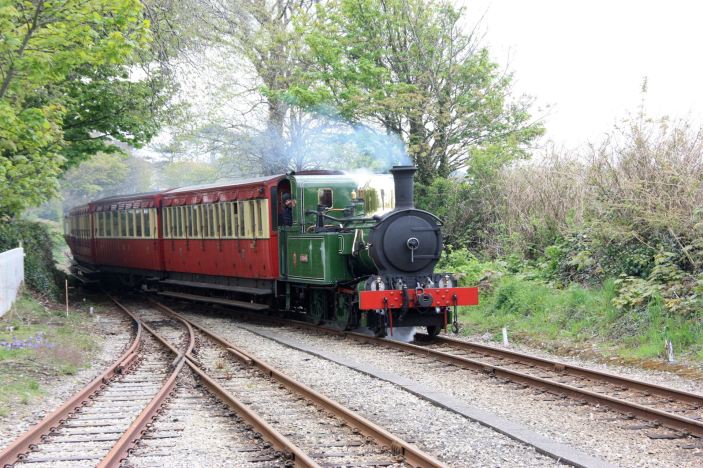