In summer 2016, Brittany remained one of only three regions in France to see local services still worked by single car X2100 units, which were in service alongside the new generation X73500 units on routes such as the branch line heading south from Rennes to Chateaubriant. Weekday services on this pleasantly rural route comprise just three or four round trips, with one  late afternoon working as far south as Retiers.

Chateaubriant’s well-preserved station has become an interchange with the re-opened route south to Nantes, which has been converted into light rail route T1 by the Pays de la Loire region and is currently served by eight trams a day, with a significantly more frequent service operating from Nantes as far north as the towns of Nort-sur-Erdre and Suce-sur-Erdre.   But co-ordination of the two rail services appears almost non-existent. Looking at the summer 2016 timetables, there was only one viable connection a day in each direction – with a southbound departure from Rennes at 07.43 connecting into a tram that gave an arrival in Nantes at 10.29, while in the reverse direction the only connection was from a tram departing Nantes at 10.10 that gave a connection into a train service arriving into Rennes at 12.51. 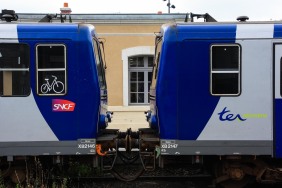 Taking advantage of the ‘petit prix rond’ tariff to make a return journey from Rennes for just €10, the lunch-time (13.40) departure on 27 July 2016 was formed of sister units X2146/X2147, with a rather modest complement of passengers, most of whom alighted at intermediate stations on the 1 hour 17 minute journey to Chateaubriant. Major investment is planned in the line’s infrastructure, but for the moment there is a very lengthy section of 40 km/h running south of Retiers, pending track improvement work.

Reaching the charming town of Chateaubriant at 14.57 there is evidence of the rather different French approach to rolling stock utilisation to what we are familiar with in the UK. While the TER units sit in the station for around 90 minutes before their 16.32 return to Rennes, a pair of two-car tram units was spending more than three and a half hours in the station, having arrived from Nantes at 13.42 and not departing again until 17.21!  From an enthusiast point of view, one major advantage of the X 2100 series railcars – which are scheduled for early withdrawal – is the cycle storage area at one end of each car, which offers a driver’s eye view of the route ahead, reminiscent of what could be enjoyed in the UK from first generation diesel multiple units.

That gives the traveller a chance to appreciate the undulating nature of the line, with other interesting features being the closed, but preserved, station at Noyal-sur-Brutz north of Chateaubriant, the three passing loops en route at Retiers, Janze and Vern – all of which are staffed stations – and the extensive sidings at Janze providing a reminder of once significant freight traffic, lost to lines like this in the 1980s. Finally, at Vern there was a meeting of the old and the new, as X2146/X2147 passed railcars X73583/X73596 forming the 17.28 service from Rennes to Retiers (arr.18.11).