Sri Lanka’s extensive broad gauge (5’ 6”) railway network not only boasts a great deal of classic mechanical signalling (see my earlier “Eye Kandy” post) but also offers some magnificently scenic rail journeys at absurdly cheap fares, and an interesting variety of rolling stock, imported from places as far afield as the US and Japan.

The island’s 937-mile (1,500km) network stretches from Jaffna in the north to Galle and Matara on its southern coast, with a route following the west coast northwards for some 85 miles from Colombo to Puttalam, the “Main Line” heading north-east from the capital to Kandy and on into the Tea Country to a terminus at Badulla, and other branch lines reaching the east coast at Batticaloa and Trincomalee.

Railways on the island were introduced by the British colonial government in the 1860s, and, for those with an interest in British traction, there are a couple of classes of diesel locomotives currently in service amongst the island’s varied fleet.

Newest are the M7 Class fleet of 16 bo-bo diesels, built by Brush and delivered in 1981, the first of which is 799, seen here as it approaches Mundal with a late-running northbound service to Puttalam on 20 July 2017.  The train had been delayed here as the loco was needed to rescue a failed DMU on a southbound service, which I had been travelling on!

Having reached its terminus behind schedule, the return service from Puttalam at 13.30 was around 20 minutes late, and is seen here departing from Palavi, the first station south of Puttalam, at around 14.00 on 20 July. There is a junction north of the station here where a freight line heads inland to a cement works that produces a regular flow of traffic onto the line.

The M7 class also sees action on the short section of line northwards from Kandy to a terminus at Matale. On 12 July 2017, loco 807 stands in platform 1 at Kandy station awaiting departure with the 14.00 service to Matale

Besides the M7 Class, the other British-built locos still in service are the Y Class of 0-6-0 shunting engines, delivered from Hunslet Engine Company at Leeds in 1968. One of the 28-strong fleet is loco 695, which was active as the Kandy station shunter during my July 2017 visit and is seen here passing under the celebrated signal gantry. 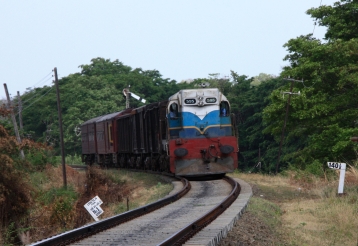 Another nostalgic feature of Sri Lankan railway operation is the mixed train, which are a feature on the routes to Batticaloa and Trincomalee, and   comprise a couple of passenger coaches and a number of freight wagons at the front of the train. Here M2 Class loco 595 (General Motors) approaches Galoya Junction on 18 July 2017 with a  mixed train from Batticaloa 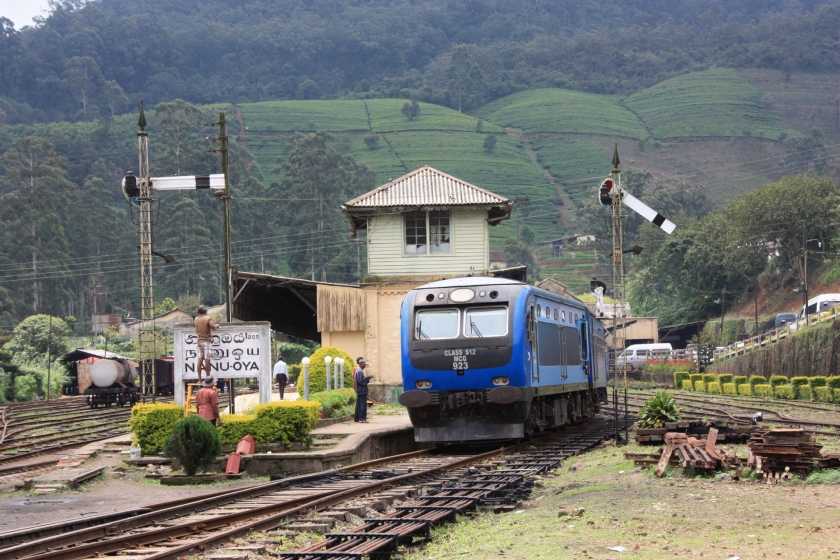 Besides the eight classes of main line locomotives and the Hunslet diesel shunters, there are also a variety of diesel multiple units, Japanese or Chinese-built, most modern of which are the S12 units, as seen here at Nanu-Oya. These offer a comfortable ride in both second and third class and are used on the scenic Main Line from Columbo to Kandy and on into the tea country to a terminus at Badulla.

By contrast, the third class only S8 units, delivered from Hyundai in 1991 and employed on Columbo Commuter services, are truly spartan, with hard plastic longitudinal bench seats (and no toilets!) that seem hardly suitable for use on the four hour+ journey from Columbo to Puttalam. Here set 834 approaches Puttalam on 19 July with a service from Colombo Fort.

Besides the lower quadrant semaphore signals that are a feature of many routes in Sri Lanka, with the exception of the Coastal Line to Galle and Matara, there are plenty of reminders of the railway’s British heritage. These include this Tyer’s Patent tablet instrument in the ticket office at Palavi and this warning to drivers at Puttalam.

There is even a station on the Main Line called Great Western!