More that three years after its March 2014 suspension, (see my earlier post “Last steam to Leszno”) scheduled standard gauge steam returned to Europe in May 2017, when two return weekday services from Wolsztyn to Leszno in Western Poland returned to steam haulage. 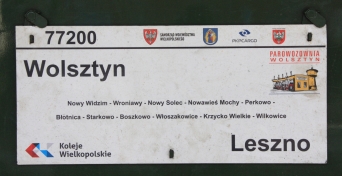 This followed the agonisingly slow setting up of a trust to own and manage the famous steam depot at Wolsztyn, the return to traffic of two locomotives and the sourcing of suitable coaches to operate the service, which should also see two Saturday round trips between Wolsztyn and Poznan, once track renewal work has been completed later this year.

The resurrection of scheduled steam operation also owes a great deal to the efforts of Howard Jones’ Wolsztyn Experience Trust, celebrating its 20th year in 2017, which provides vital funding for the steam operation through its world-famous footplate courses, which attract enthusiasts from all over the world. Details at http://www.thewolsztynexperience.org 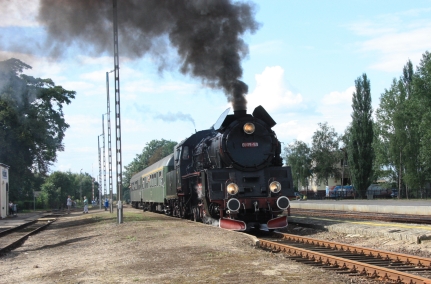 So for a single fare of just 11.60 Polish Zloties, or about £2.50 at the current depressed exchange rate, it is possible to enjoy the 28-mile (46 km) trip in one of the two period coaches, which are owned by local tour operator Turkol and leased by operator Koleje Wielkopolskie (KW). As these coaches do not have steam heating, from mid-September they will be replaced by two of the very few remaining steam-heated coaches left in Poland, which will run in the KW blue and white livery.

The two steam locos in traffic at Wolsztyn are Ol49-59, one of a class of 112 mixed traffic locos built between 1951 and 1954 to work on secondary routes, such as Wolsztyn-Leszno, and Pt47-65, the last working example of another post-war Polish design and the last class of main line steam locomotives to remain operational anywhere in Europe at the time of their withdrawal in the mid 1980s.