Railway catering has been a subject dear to my heart ever since I was first lucky enough to sample the delights of the Manchester Pullman during one of my first journalist jobs, in about 1980.

For many years after that I would take every opportunity of an inter-city journey to sample breakfast, lunch or dinner, and had many memorable meals and encounters until restaurant service had all but disappeared in the aftermath of privatisation in the mid-1990s.

Initial East Coast franchisee GNER remained a beacon of light, with its impressive commitment to full catering, but once short-lived franchisee National Express took over the rot set in and, just as happened on the West Coast under Virgin Trains, proper meals were replaced by the airline-style service we have today.

I have no objection to the principle of the current at-seat service – although of course restricted to first class passengers – but what I have always noted is how varied the service can be – a criticism equally applicable to both WCML and ECML.

While many catering crews seem salt-of-the-earth types only too eager to please and slip you that extra drink or snack, there are also the jobsworths who seem to forget that catering is included in your ticket price, and offer the bare minimum by way of service. 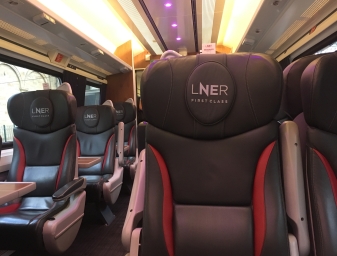 So three months after its re-nationalisation I was eager to see how catering was shaping up under LNER and to test out what was on offer while on a long-awaited first class trip from King’s Cross to Edinburgh and back.

My northbound trip was aboard the 13.00 from King’s Cross on Thursday (20 September) and, being lunch-time, I was interested to see and test the quality of the hot food offering, where my options from the menu of LNER first class chef James Martin were creamy lemon and herb chicken or spicy veggie chilli.

Alas, I was doomed to disappointment. The previous day’s gales had brought down the overhead wires around Newcastle, so a much reduced service had led to cancellation of both the previous 12.30 and the following 13.30 services, with the 13.00 being operate by an HST in place of the normal Class 91/Mark IV stock.

That meant chronic overcrowding all the way to Newcastle, with not the slightest chance of any at-seat service, leaving me and another fellow traveller to fight our way to the kitchen area and fetch what was on offer. So I can at least vouch for the quality of the prawn and Bloody Mary sandwich and the white Rioja, even when served in paper coffee cups!

Still, as we were 67 minutes late arriving at Edinburgh Waverley (18.25) at least I and my many hundreds of fellow travellers will be entitled to a full refund of our train fares, under the delay repay regime.

Returning south on another lunchtime service – the 13.30 from Waverley on Monday, 24 September, I was relieved to see that East Coast services were running normally once again, and looking forward to savouring James Martin’s lamb and vegetable stew, the most appealing hot meal option I had spotted reading the latest weekly menu online.

Alas, disappointment once again. No menus were in evidence in the coach I was travelling – they had apparently not been delivered – while a staff shortage meant that there would be no hot food available until after Newcastle, 90 minutes into the journey.

Making do with a tasty salmon sandwich before my late, late, lunch, hot food orders were finally taken as we reached Darlington (15.27), when the steward expressed no knowledge at all of lamb and vegetable stew and reeled off a menu that bore no relation whatsoever to the week’s “rest of the day” menu published on http://www.lner.co.uk.

So finally at York (two and a half hours into the journey, at 15.59) I, and the two people sharing a table with me, were served a modest chicken, bacon and mushroom dish – which I cannot describe precisely as it is not on the published menu – but which was very pleasant.

This train was thankfully punctual – reaching Kings Cross two minutes early at 17.50 – and the drinks service was quite acceptable, but the promised food service still seems to be a triumph of style over substance, and could be so much better.

Is it really that difficult to get menus delivered on time, why are there staff shortages preventing the offer of the promised service, and why on earth whet our appetites by publishing menus online that bear no relationship to what may actually (and eventually) be forthcoming?