Paying a long overdue return to the remarkable Chemins de Fer de Provence (CP) metre-gauge line from Nice to Digne-les-Bains, almost exactly 30 years after my first visit, it was interesting to see how much has changed, but also what has not.

My original trip in late September 1988 had taken me on a famous named train called the Alpazur from the splendid Gare du Sud in Nice to Digne, where a SNCF railcar waited with the onward portion of the Alpazur to Grenoble.

Alas, both the Gare du Sud and the Alpazur have long gone, although the magnificent station building, which was replaced by a modern structure nearby in December 1991, is currently being transformed into “Le food et culture market de Nice” and is due to open for business in 2019. Pictured left is the Gare du Sud in September 1988, with X351/XR351 on the Alpazur and loco T62

The Alapazur, which had first run in 1959, lasted one more summer season before ending in September 1989 and so closing the 22km-long (14-mile) SNCF branch line from St Auban to Digne, on which regular local services had ended in 1972. It remains intact to this day, though heavily overgrown in the area of Digne station, and is subject to periodic re-opening attempts.

Today’s CP station in Nice is a functional three platform affair just west of the old Sud station, which continues to handle four daily round trips on the 151km (94 mile) journey to Digne, along with an intense commuter service to and from industrial areas north-west of Nice. Pictured here is an AMP unit departing Nice CP with a service to Colomars. 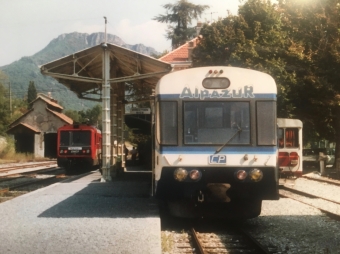 At the northern end of the line, Digne-les-Bains remains a functioning SNCF and CP station, but for the total lack of any actual trains. Since the last Alpazur ran in September 1989 all links west and north have been by bus. Meantime CP services have been suspended since September, due to extensive track renewal, and are not scheduled to resume until 14 December.

There is no change, however, in the critics’ judgement that what is known locally as the Train des Pignes, or the train of pine cones, ranks as one of the world’s most spectacularly scenic railway journeys, rated the third best after routes in Peru and Switzerland, according to one guard I was speaking to. Pictured here is Digne today and the Alpazur in 1988

From the moment the train leaves Nice and immediately crosses three un-gated road crossings before entering the first of no less than 27 tunnels, this is a rather special journey that takes you for mile after mile along the scenic valley of the Var river, then on past the amazing medieval town of Entrevaux, the ski resort of Annot and on up to the noted spa town of Digne-les-Bains. 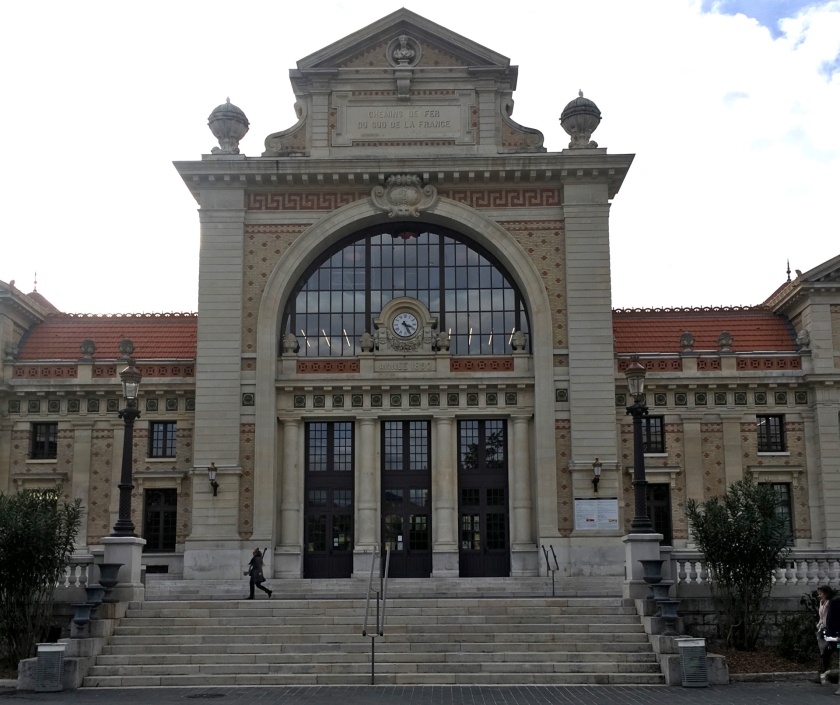 At the time of my visit in late November trains had just resumed running as far as Saint-André-les-Alpes, 44km (27 miles) south of Digne, having only run as far as Annot until the previous week, with a rail replacement bus for the journey on to Digne.

Renewal works currently taking place are part of a €21 million package, comprising both track renovation and the construction of new raised platforms at 16 stations along the line, and all due to be completed in June 2019. Back in 1988 certain trains towed a parcels trailer, such as XR1333 seen here at Plan-du-Var, but now sadly dumped at Entrevaux (below).

Evidence of this work is very apparent at stations along the line, where station buildings remain, but no longer open out onto a platform as some are re-sited, and all are raised, in order to improve accessibility.

What is less clear though, is when suitable new rolling stock is going to materialise. A €3 million deal was signed to acquire six 1995-built two-car CAF units from Mallorca, made surplus by electrification there.

After modifications, these had been due to start work on suburban services in 2016, but only one has so far appeared and is currently dumped out of use and covered in graffiti near the CP workshops at Lingostière – seen above as it is passed by an AMP unit, with abandoned AMP 801 on the left.

A fleet of four new two-car units, known as the AMP 800 series was delivered in 2010, but despite their comfort and popularity with passengers – panoramic windows giving excellent visibility – they suffer from reliability problems.

In addition to that, the first pair has been out of action since being hit by a 10 tonne rock near Annot in February 2014, killing two people and injuring a number of others. Heavily damaged vehicle AMP802 has been shrouded by a tarpaulin at Annot for the past four years (pictured here), while sister vehicle AMP801 is unceremoniously dumped in a siding at Lingostière (pictured above).

So for the moment it is back to my fond memories of September 1988, with the mainstay of services still being the very comfortable X300 series railcars, built by CFD Montmirail and delivered between 1972 and 1977. 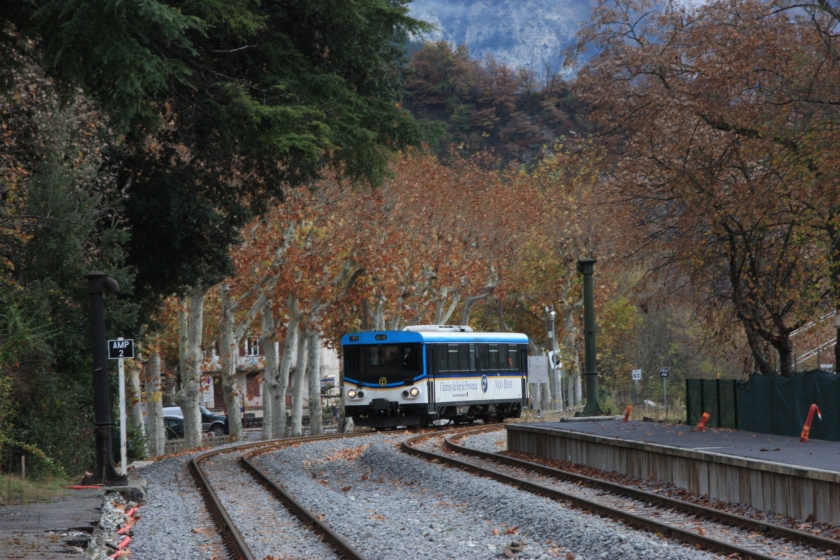 What makes these units an enthusiast’s delight is having no partition between driver and the passenger saloon, giving passengers in the pair of seats each side of the centrally-seated driver an unrestricted view of the line ahead.

Pictured above is X301 arriving at Puget-Théniers on 22 November 2018 with a northbound service. Note how the old water column has been retained and mounted at the end of the new platform on the right.

Angered by CP’s continued reliance on these 40-year old railcars, a body called the Association des amis du rail Azuréen has a petition on display at Annot station that is demanding action to tackle rather familiar sounding complaints about delays and cancellations! 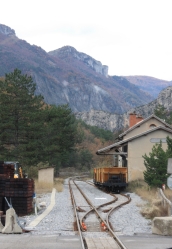 Like other places in France the state-run CP (a local company and not part of SNCF) does not believe in offering such obvious leisure travel opportunities as cheap day returns or rover type tickets, simply selling return tickets at double the price of a single.

So besides being a pretty full-on day – a single journey from Nice to Digne takes around three hours 15 minutes – it also works out at a fairly expensive one, with an end-to-end adult single currently costing €24.20.

But anyone travelling in a group of up to four people, or planning anything more than one round trip in the space of a year, would be well advised to take the time an effort to buy a “Carte Zou!” which costs €30 a year for adults, and gives a 50% reduction in fares for the holder and up to three accompanying passengers. 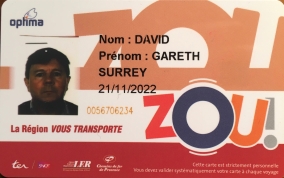 To get one, you need to download an application form (in French) from the www.trainprovence.com website, then take it with a passport-size photo and a copy of the identity page from your passport to any CP booking office, where your railcard will issued immediately.

Given that there seems no mention of it on the English version of the website I had fully expected a problem when presenting my application form, but encountered none at all, and have since seen that it is mentioned in an English language version of a Train des Pignes publicity leaflet.

Arriving in Digne by replacement coach, just in time to discover that the local bakery had closed for its two hour lunch break, I decided to explore the extensive and seemingly abandoned station yard. Immediately visible were a dumped passenger coach and a parcels vehicle in the old CP station – alongside the SNCF one – similar to one I had seen back in 1988.

The real excitement came, however, when I ventured further to the locked depot building (pictured here) where, peering in through windows protected by iron bars I could see railcar X305 in the maroon livery of 30 years ago and pre-war Renault railcar ZZ22 (previously ZZ2) in blue livery and bearing the classic Alpazur branding.

Asking about their status during a visit to Lingostière works the following day, my guide was slightly unsure, but suggested that X305 was for sale and that the classic Renault vehicle might see future use on tourist services – an inspired idea, if he proves correct.

Rounding off two fascinating days on the CP, I had decided to see if my French was good enough to blag me a visit to Lingostière works, if only to get permission to photograph the two surviving 1951-vintage Brissonneau & Lotz locomotives, T62 and T66, standing forlorn and unloved in the works yard, where they had attracted the unwelcome attention of graffiti artists.

To my pleasant surprise, the first person I encountered directed me to the works foreman, who immediately agreed to my request and quickly found me a hat, safety shoes and a high-vis jacket, to ensure that I met their safety standards. Pictured above is X351/XR351 leaving Lingostière with the Alpazur in September 1988, while 30 years later X301 departs with loco T62 alongside.

In the works were ex-Corsican railways X307 (CFC X2003) lifted off its bogies and receiving a major overhaul, along with XR351 (pictured here),  the trailer half of the former Alpazur liveried unit X351, which I had travelled on in 1988 and whose power car was in a locked shed in the yard south of the works.

Standing in the yard was X303 receiving attention, while close by stood T62 – which I had photographed at the Gare du Sud in 1988 – along with X302, which had a number of smashed windows. Finally T66 stood furthest from the works beyond the shed containing X351.

Friendliness of CP staff is a noticeable feature of the railway, both to passengers and to colleagues. At every staffed station north of Plan du Var (the northern extent of commuter services and colour light signalling) the Chef de Gare is greeted with kisses by both driver and guard.

The original CP station in Digne stands alongside the SNCF station, now served by the metre gauge trains from Nice. Former parcels trailer XR1337 stands in the closed station.

He, or often she, then turns a square red and white enamel stop board on the platform through 90 degrees and signals the train away by unfolding and holding up a card with a green stripe on a white background. 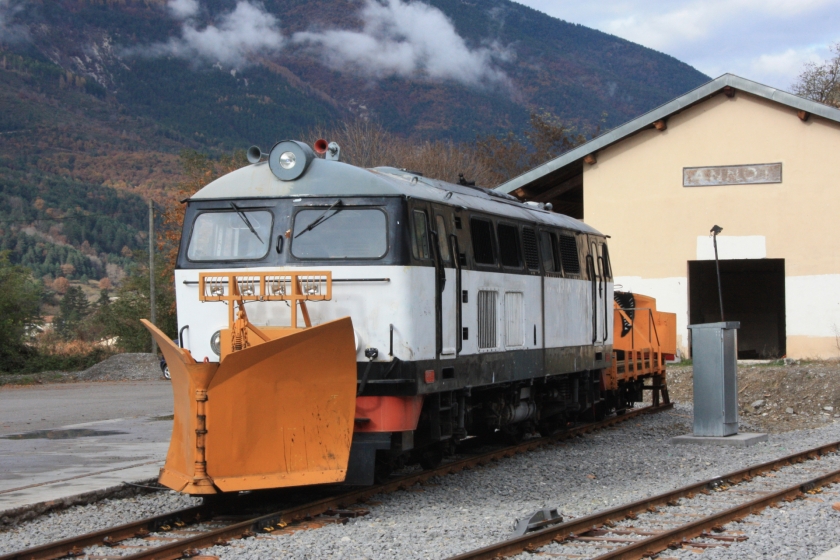 CP’s only working locomotive is BB1200, built in 1966 by Henschel and acquired from Spanish operator FEVE. Its use is confined to departmental workings.

Taking a mid-morning commuter trip to Colomars La Manda aboard X304, it was also noticeable how every passenger greeted both driver and guard on joining the train, then thanking them and wishing them a bonne journée on alighting, much like many Brits do when getting off a bus! Such pleasantries are not possible, of course, on the AMP units, where the driver is closeted away in a secure cabin.

Besides the Digne services and the commuter journeys to Colomars and Plan du Var, there are two other notable services operated on CP. Firstly there are summer Sunday steam services from Puget-Théniers to Annot, run in conjunction with a group called GECP and hauled by Portuguese 2-4-0+0-6-0T Mallet E211 (Henschel 1923), which was sadly locked in its shed on the day of my visit.

Then there are regular football specials from Nice to a halt called St. Isidore, which overlooks the impressive 35,600-capacity Allianz Riviera stadium, the home of high-flying League One side OGC Nice. 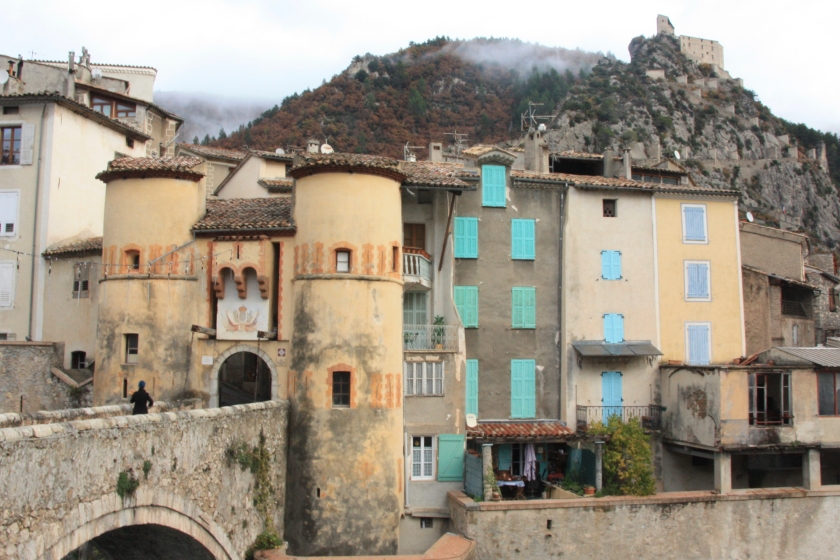 One of the most fascinating places served by CP is the medieval town of Entrevaux, seen here with the citadel overlooking the town.

The CP is a truly remarkable railway, carrying around 400,000 passengers a year, of which around 80% are accounted for by the commuter services, and it is impressive to see the scale of investment going into its upgrade, with talk that there may even be electrification of the section from Nice to Plan-du-Var.

Getting to the CP in Nice is very straightforward, with the station being a little way north of the Nice Ville SNCF station, a five minute walk, or one stop on the splendid new tramway (alight at Libération, the stop in front of the Gare du Sud).

One thought on “Two days in Provence”