Like most other projects on our national railway network it is running late and over budget, but later this month the splendid semaphore signalling along ten miles of main line from Gilberdyke to Ferriby, on the north bank of the River Humber, will finally disappear, as control of the route passes to the Railway Operating Centre at York.

It will come as no surprise to those who read my September 2017 feature “Humberside re-signalling delayed” – which, incidentally, provoked outrage from one local NR manager at the time – to see that the planned spring 2018 completion date has been missed by eight months.

But it is also interesting is to see that what was billed as a £34.5 million project when  contracts were first let in February 2016 has, according to the most recent Network Rail press release, now become a £50 million project.

Having travelled the length and breadth of Britain last year to document surviving semaphore signalling, I believe this is the finest remaining stretch of main line railway to be mechanically signalled, and the closure of seven signal boxes – Gilberdyke, Oxmardyke, Broomfleet, Cave, Brough East, Welton and Melton Lane – will be a sad loss for lovers of our signalling heritage.

In addition to this seven – Crabley Creek crossing box remaining for historic legal reasons – two other boxes to close, though without any semaphores left, are those at Saltmarshe and Green Oak Goit. 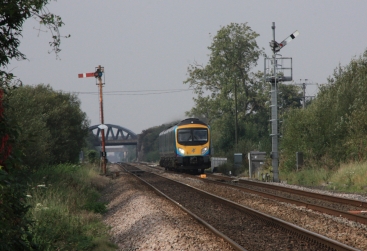 So, as closure on 23 November looms large, this seems a timely moment to take a farewell look at the signalling controlled by the westernmost of the doomed boxes, Gilberdyke Junction, a North Eastern Railway box with a 55-lever frame that dates from 1903.

The box controls convergence of the routes from Doncaster and Selby and, until 1987, was the start of a lengthy section of quadruple track, running east and dead straight, as far as Ferriby.

Looking west towards the junction from Gilberdyke station there are two separate home signals standing in the formation of the former platform road, with the junction and signal box visible a short distance away beyond a road over-bridge.

From this road bridge it is possible to get a good view of the box and most of the semaphores it controlled at the junction itself and beyond in the Selby direction, with an up starter, and both outer home and home signals in the down (eastbound) direction, with the latter having a distant beneath.

Also in view are a down home on the route from Doncaster, obscured by a sighting board, with another distant beneath that has no sighting board. Curiously the up Doncaster starter, further round the left hand curve, is a colour light.

Looking in the opposite direction, where a good vantage point is the station footbridge, a total of four semaphores are visible. In the down direction, the starter has a home and a distant arm, with the latter worked from the nearby Oxmardyke gate box.

There is one other excellent vantage point at Gilberdyke, from which a number of the accompanying photos were taken, which is from a pair of level crossings in nearby Bellasize Lane, just west of the signal box.

Photos accompanying this piece were taken on a misty Sunday morning (8 January 2017) and on a second visit (9 August 2017). For more photos and narrative about this fascinating stretch of line, see my September 2017 feature here: https://railwayworld.net/2017/09/28/humberside-re-signalling-delayed/#more-1506