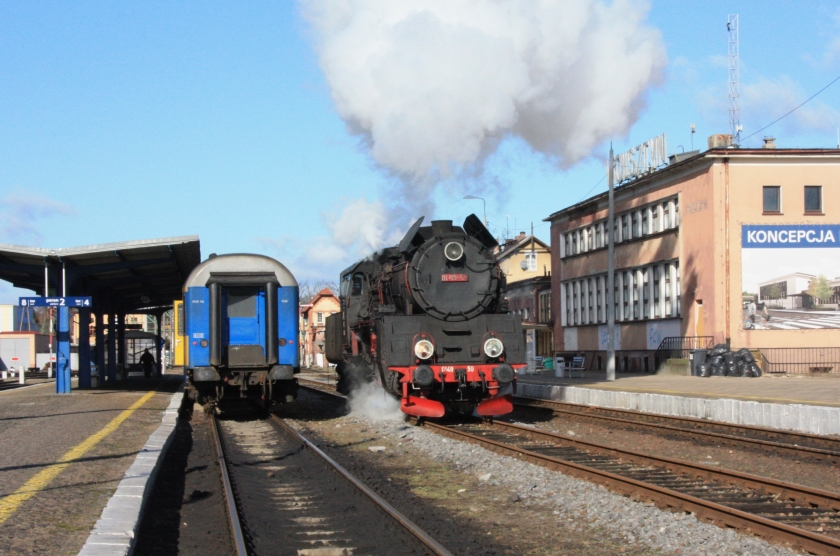 In what could well be the final year of daily scheduled steam operation, a major change to the workings from Wolsztyn depot in western Poland is taking place immediately after its famous May Day “Parade” event, which occurs this year on Saturday, 4 May.

The start of a much-needed rebuild of the line from Wolsztyn to Leszno means that from 5 May until early September weekday steam operation will be switched to the shorter Wolsztyn – Zbaszynek route, meaning the return of daily steam operation to a short section of the Berlin-Warsaw main line.

There are currently three daily services on this section of line, with departures from Wolsztyn at 06.15, 11.46 and 15.45 and return services leaving Zbaszynek at 07.16, 12.35 and 16.57. Steam will be used on all three round trips, but timings have not yet been finalised.

Zbaszynek is now served by most of the regular (two-hourly) Berlin-Warsaw expresses, so during the summer months there will be the chance to reach Wolsztyn from either capital with just one change onto a steam service. 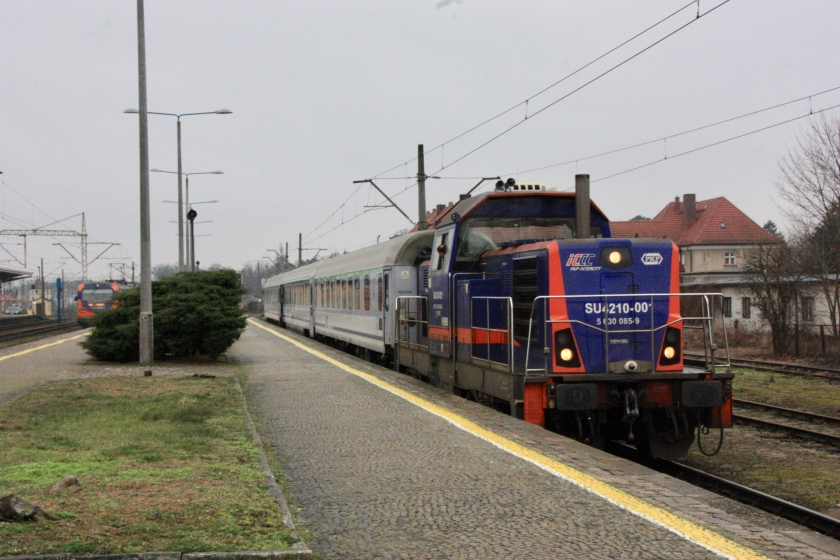 Engineering work elsewhere has brought the rare sight of loco-haulage, and a daily Inter-City service, to the cross-country route from Zbaszynek to Gorzow. Here SU4210-001 departs at 12.22 on 13 February 2019 with IC18101 from Warsaw to Gorzow.

Another major change to Wolsztyn’s steam schedule could take place on Saturdays. Starting in June the present two return services to Poznan may be replaced by a single return trip, out early morning and back late afternoon, with the train then making a tourist-orientated trip following a circular route around the city. 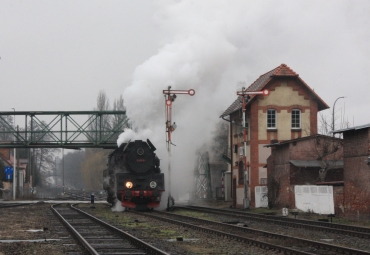 As described in my previous post from Wolsztyn last October (“Time running out for daily Wolsztyn steam services”) the future of regular operation, after the main timetable change on 7 December, currently hangs in the balance.

There have been threats to cut regional government funding and a number of the steam crews are approaching retirement. But three new firemen have been recruited and should be passed out as drivers by early next year, so some form of steam working will hopefully live on. 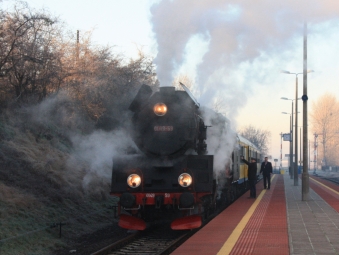 Sitting on the early morning Poznan service (06.28) and seeing the February dawn gradually break, to the sound of the loco and its regular whistling is a timeless and unforgettable experience, and a far cry a journey on the regular SA132 railcars. With 50 miles of steam haulage for a fare of just over £3.00, it is also a remarkable bargain!

For those unfamiliar with the area, Wolsztyn is a charming town, situated 50 miles south-west of Poznan, with an attractive town centre, a number of very good restaurants and delightful walks around its two lakes, not forgetting a bar where the beer costs PLN5.00 (£1.05) a pint! 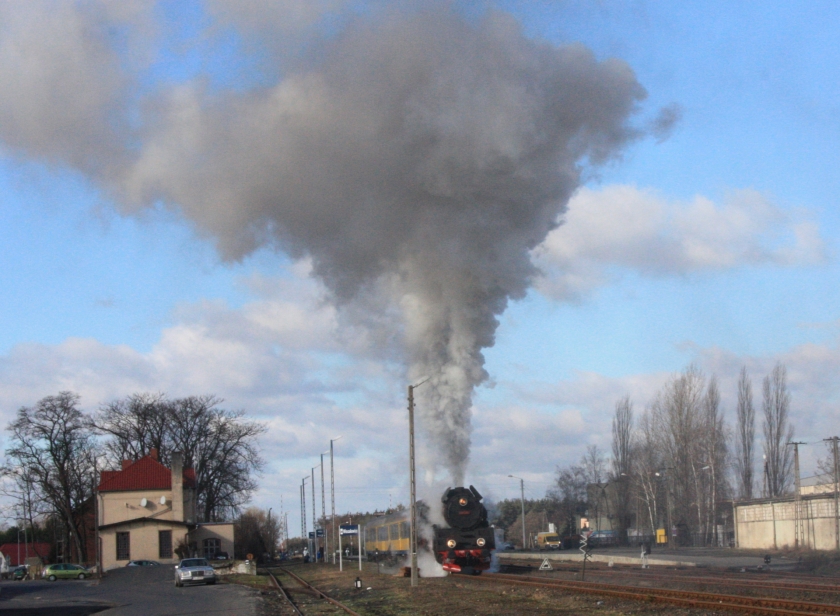 Pictured here and bottom are Ol49-59 departing Wloszakowice on 12 February 2019 with the 11.33 Wolsztyn-Leszno service

Using the current Leszno steam services, a particularly enjoyable outing from Wolsztyn is take the 11.33 steam service and either go for a lakeside lunch at Boskowo, or carry on to the next stop, Wloszakowice, where there is another welcoming hotel only five minutes from the rail station.

Poznan too, is an attractive city, with an historic town square only a short walk from the main railway station. One great way of getting around is to buy a 24-hour bus and tram ticket (PLN13.60/£2.80), alighting from the Wolsztyn train at Poznan Debiec and catching a tram from the nearby terminus. 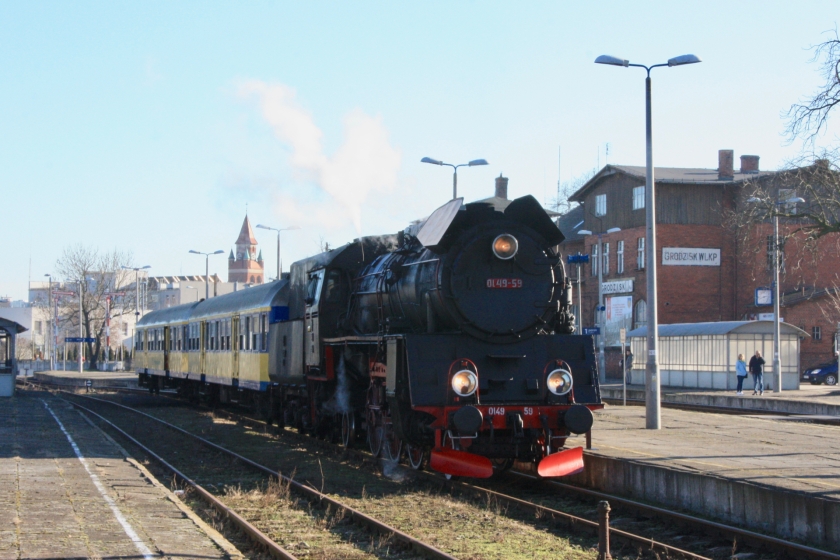 As an alternative to a tram tour, and the proposed tourist circular steam service, a major new attraction in Poznan that is due to open in early June is a tank museum, currently nearing completion on a large military site adjacent to the airport.

Paying a VIP preview visit, courtesy of Wolsztyn Experience founder Howard Jones and the Polish Colonel in charge of the PLN22 million (£5 million) venture, it was easy to appreciate how its four exhibition halls, filled with military hardware dating from World War One to the 1990s, should become a major tourist attraction.

For regular updates on Wolsztyn depot (in Polish and German) take a look at http://www.parowozy.com.pl and to learn more about the world renowned footplate experience opportunities, go to http://www.thewolsztynexperience.org 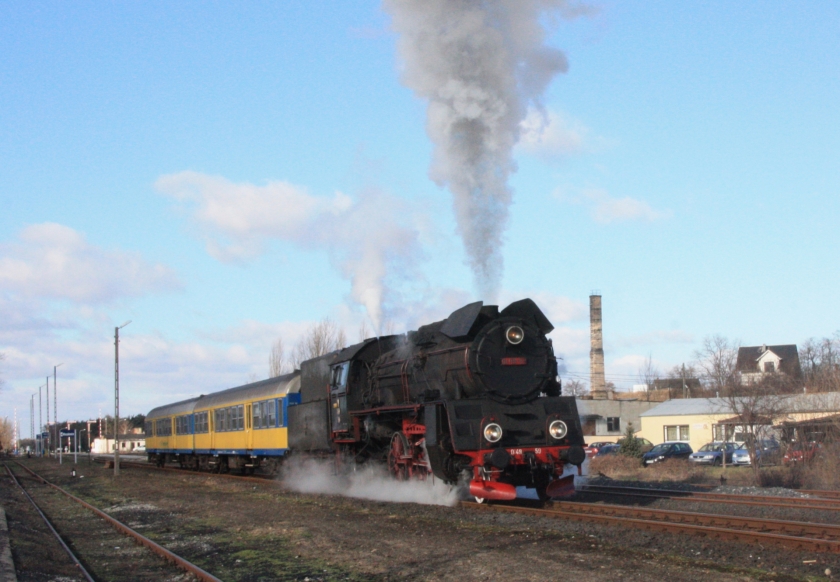