Re-signalling in the Aberdeen area has meant closure of signal boxes at Inverurie, Dyce and Newtonhill, but further south, on the section of East Coast Main Line to Dundee, there are a number of fine outposts of mechanical signalling, notably at Stonehaven and Arbroath, but also at half a dozen other smaller places.

One of these smaller locations is Laurencekirk, a town which is now home to many commuters into the Granite City. The station here fell victim to Beeching and was closed in September 1967, but was re-opened at a cost of £3 million in May 2009 and, like so many other reopened stations, has seen traffic boom.

What makes this revival impressive is that it included a full refurbishment of the main station building, on the down (northbound) side of the line, which had fallen into a state of disrepair during more than 40 years of closure. Also provided, as part of the re-opening project, was a new 70-space car park.

Services from Laurencekirk principally comprise an hourly Montrose-Aberdeen stopping service, which will be extended to Dyce and Inverurie to create an Aberdeen Crossrail service once Aberdeen-Inverurie re-doubling has been completed later this year. 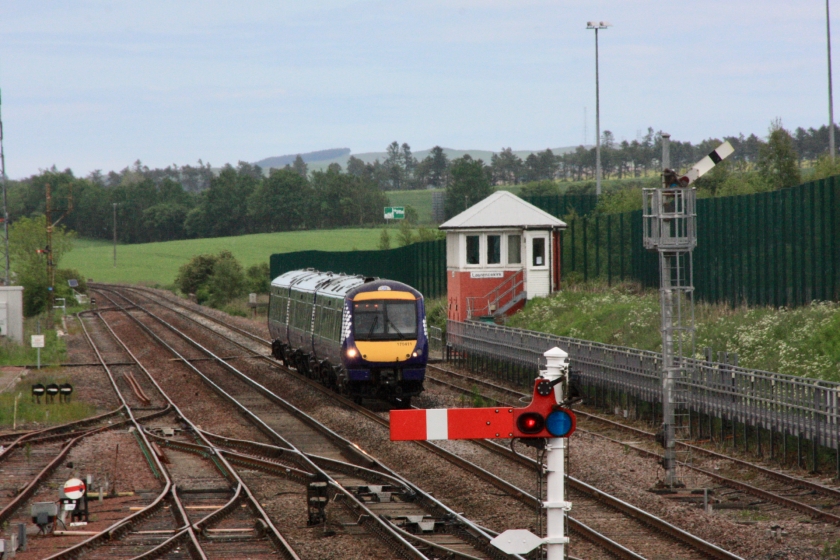 Laurencekirk’s Caledonian Railway signal box dates from 1910 and has a 40-lever frame. It stands around 250 yards north of the station, on the east side of the line, and controls five semaphore arms and a number of disc shunt signals including three in a row on the down siding (LK28/26/23).

Looking north from the platform, the three semaphores controlling down trains are a home (LK20) at the end of the platform, a starter LK18 on a lattice post (only just visible in the distance) and a mini arm (LK10) signalling exit from the refuge siding. 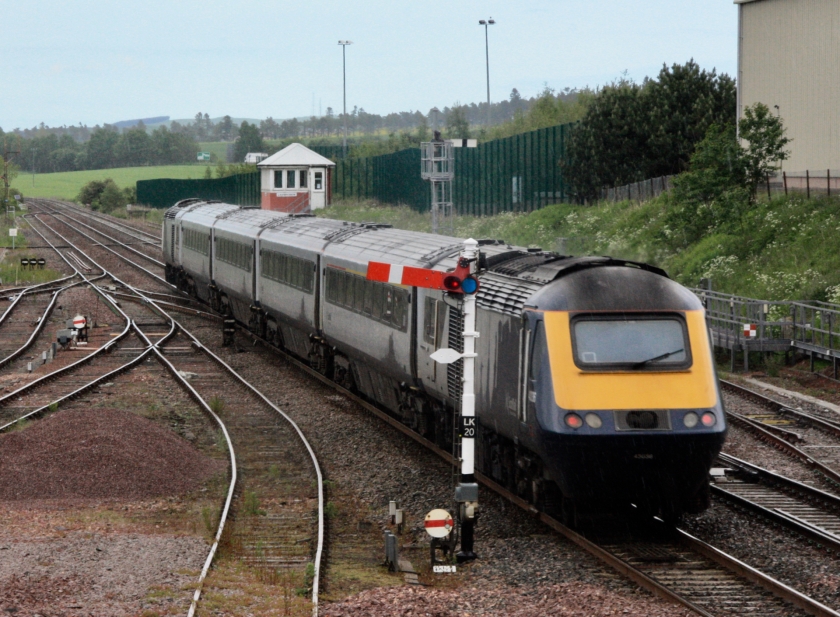 Down home LK20 is motor-worked and, unlike the other semaphores, returns to danger almost the moment a train has passed, as seen above where one of the new ScotRail I7C sets passes with the 10.40 Glasgow Queen Street-Aberdeen. 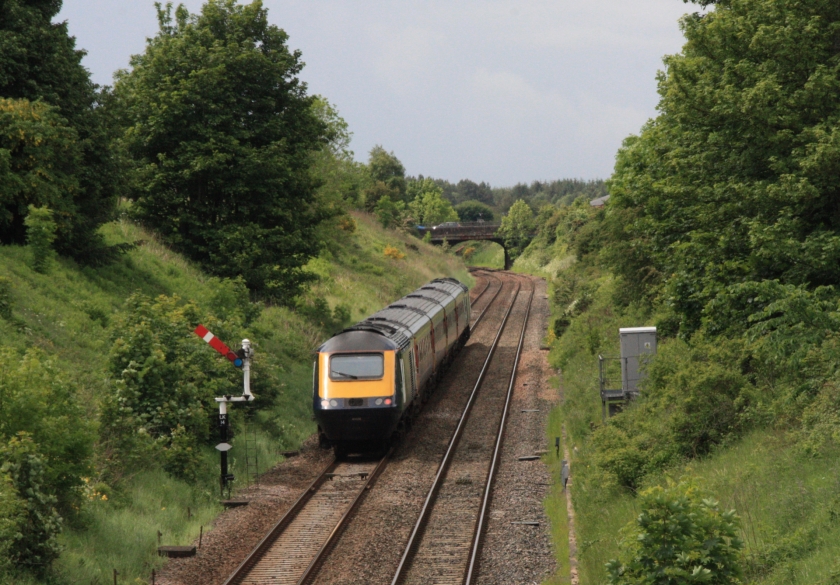 In the up (southbound) direction, LK12 stands between the signal box and station with up starter LK14 mounted on a crooked post and stands beyond a road over-bridge south of the station (pictured above).

Getting to Laurencekirk by train from Edinburgh requires a 30 minute break at Montrose, with the local service north from here seemingly timed to make better connections in both directions with Glasgow-Aberdeen services. 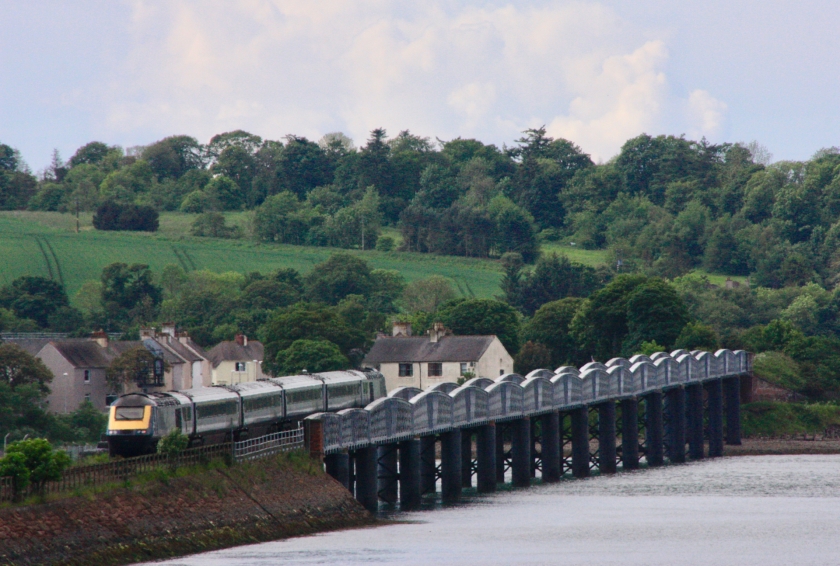 Montrose makes for a pleasant interlude, however, with a fine view looking south from the station footbridge of the single track South Esk Viaduct (pictured above), and looking north of Montrose North Signal Box and two of its three surviving semaphores.

Heading north from Montrose on the stopping train there is a brief glimpse mid-way to Laurencekirk of another mechanically signalled location at remote Craigo, a former station (closed June 1956) whose signal box boasts a total of four semaphores.

Traffic passing Laurencekirk comprises the hourly Class 158 or 170-worked stopping services and fast ScotRail services between Aberdeen and Glasgow/Edinburgh, operated by a mixture of Class 170 units and the newly introduced I7C 2+4 HST sets.

There are also a few (four each way daily) LNER HST services to and from Aberdeen, a couple of XC services, as well as very occasional freight traffic. 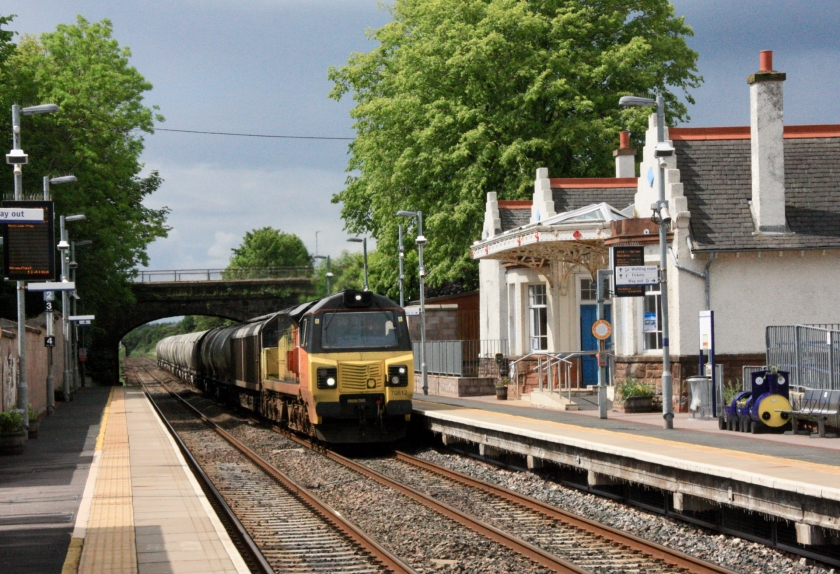 During two hours there on 10 June, the only workings were a Colas Rail Class 70-hauled train of tanks from Oxwellmains Cement Works near Dunbar to Aberdeen (pictured above) and a Class 66 passing light engine towards Aberdeen.

For a comprehensive list of surviving Scottish semaphore signals go to http://www.scot-rail.co.uk My new book “Britain’s last mechanical signalling” is being published by Pen & Sword in late July.