Rover and ranger tickets are a great way to see parts of the country by public transport at a bargain price so, having once travelled the entire 268-mile Cornish rail network in a single day for the price of a Ride Cornwall ticket (£10.00 at the time), I felt it was high time to try something similar in the charming Cotswolds.

My ticket this time was a Cotswold Discoverer one day pass (£10.50 adult or £6.90 with a railcard), which offers rail travel from Ashchurch to Gloucester, Yate and Swindon, as well as Moreton-in-March to Oxford, along with a whole host of bus routes across the region, extending from Stratford-upon-Avon in the north to Chippenham in the south.

In an attempt to sample the range of services and destinations I could reach with a Discoverer pass, I created a circular tour from Cheltenham Spa that would hopefully take me to and through some of the most picturesque towns in the Cotswolds, and also test out the quality and reliability of the region’s public transport services.

Planning such a trip takes a bit of organisation, as train services are provided by two separate operators (GWR and XC), while there are no less than four different bus operators providing services that can be used, three locals in Johnsons Excelbus, Pulham’s Coaches and Swanbrook, along with Stagecoach services in the Cheltenham, Gloucester and Stroud areas.

So for anyone tempted to embark on such a trip, the first thing to do is to download a two-page leaflet here: https://www.cotswoldsaonb.org.uk/visiting-and-exploring/cotswolds-train-station/discoverer-one-day-pass/ to see the full list of services, and then go to websites for the individual operators to check and print up-to-date timetables. Some bus drivers seem unfamiliar with Discoverer tickets, so it is well worth taking a copy of the leaflet with you.

Starting from the useful park & ride at Cheltenham Racecourse, my planned Discoverer itinerary would take me firstly to Moreton-in-Marsh, then on to Oxford, before returning as far as Northleach. From there I would head to Cirencester and on to Swindon, before caching the train back to Cheltenham Spa and a bus to the Racecourse park & ride.

A quick trip on the 08.15 Stagecoach D bus into the town centre and a walk round to Royal Well bus station was perfect timing for the 08.40 Pulhams 801 service to Moreton-in-Marsh. This is the flagship route of the long-established (1880) Bourton-on-the-Water-based operator, with nine daily weekday round trips and a great reputation for staff and service quality.

Most 801 journeys, including mine, take a slightly indirect route to Moreton by going along the A40 as far as Northleach, providing connection opportunities there with another Pulhams service to Cirencester that I would be sampling later. This means a journey time of approximately 90 minutes from Cheltenham to Moreton, ten minutes slower than those journeys along the more direct A436.

Having taken a trip to Moreton only a few months ago, I knew that the 801 was a busy route, that has a good patronage to and from Cheltenham, and is very popular with tourists arriving by train at Moreton and wanting to visit two of the region’s most charming towns, Stow-on-the-Wold and Bourton-on-the Water (pictured above).

Besides visiting Northleach, a trip on the 801 also takes you through the heart of Bourton and into the centre of Stow, before arriving in Moreton-in-Marsh High Street and then helpfully continuing on a short distance to the right and turning in the railway station.

Moreton-in-Marsh is a very pleasant town (Donnington Ale in The Black Bear highly recommended) that stands on either side of the A429 Fosse Way at its junction with the A44 route from Oxford to Worcester.  Its charming railway station, complete with semaphore signalling and Japanese signage, is served by hourly GWR Worcester-Paddington services that reach the capital in around 90 minutes (pictured below).

Arriving on the 801 at 10.07 meant just enough time for a walk around the town centre before catching the 10.52 train to Oxford. This is a pleasant 37-minute journey along the rural Cotswold Line, stopping en route at Kingham and Charlbury, but speeding through charming Ascott-under-Wychwood, whose sparse train service I highlighted in my June blog: https://railwayworld.net/2019/06/02/parliamentary-train-to-oxford/#more-2820

Reaching the city of dreaming spires shortly before 11.30 I had just over an hour to re-acquaint myself with the city’s splendour, before making my way to the Taylorian Institute in St. Giles to embark on the next leg of my bus and train tour of the Cotswolds. The ten-minute walk from the railway station to city centre was enough for me to decide that I would pay a return visit when the tourist season was not in full swing.

Returning to road transport for the next sections of my trip, I boarded the Swanbrook 853 service bound for Cheltenham in St. Giles, to take me on an hour-long journey back as far as Northleach.  Like Pulhams, Swanbrook is another long-established local operator, although the three times daily 853 service, that it has been running for more than 25 years, currently seems to be its only scheduled operation. 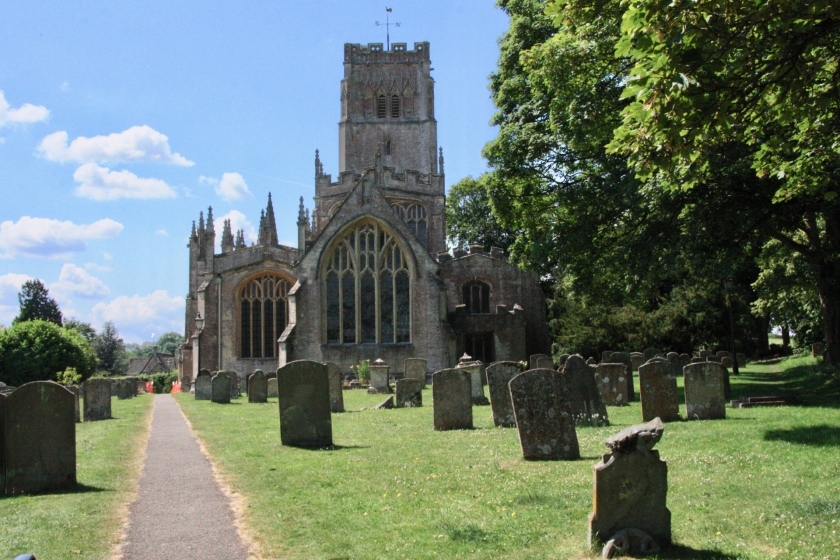 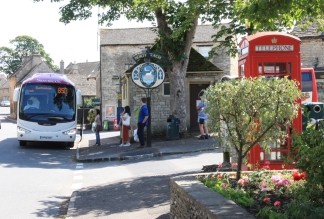 Service 853 lives up to its description in Swanbrook’s publicity leaflet, with a stylish and modern coach, comfortable seating and plenty of legroom. The journey to Northleach takes you through another the centre of another delightful Cotswold market town long since by-passed by the A40, Witney, and passes the edge of a second, Burford, though not going into its quaint high street. 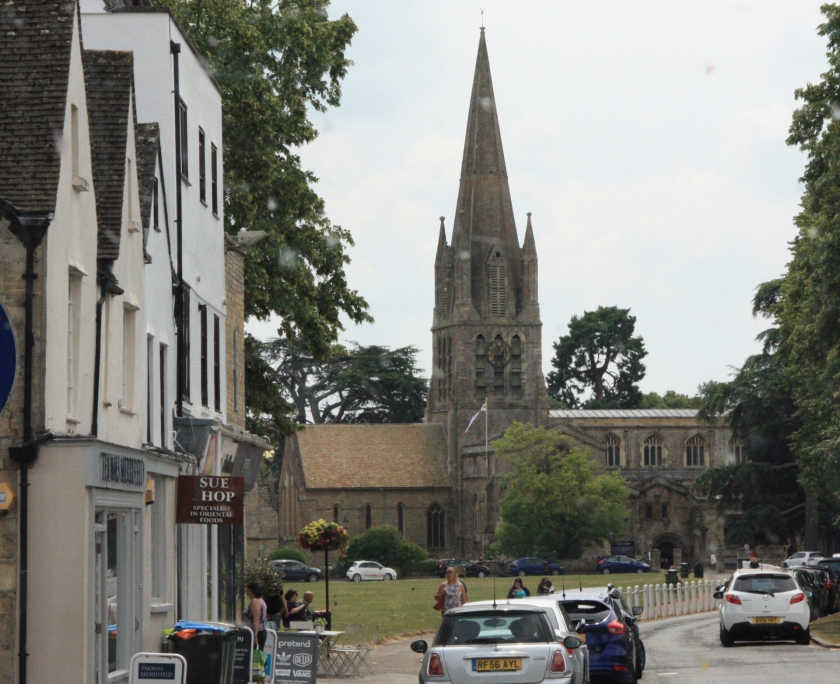 Like Witney (pictured above), Northleach benefitted hugely when it was by-passed by the A40 (in 1984) and regained its status as another tranquil and historic Cotswold market town. It is here that I resume my acquaintance with Pulhams, by alighting from the Swanbrook service and, after a short wait, board its 855 service to Cirencester.

This route comprises five round trips a day, all but one of which makes a delightful detour on its 37-minute journey to serve the famous Cotswold village of Bibury, whose nationally-recognised landmark, the terrace of houses known as Arlington Row (pictured top) is featured on the inside cover of United Kingdom passports and is one of only six UK landmarks featured at the Mini-Europe theme park in Brussels.

Cirencester (pictured above) is another gem of the Cotswolds that deserves a far more leisurely visit than today’s itinerary allows for. It is the largest town in the Cotswolds and dates back to its development by the Romans (as Corinium) in 150 AD. Later it became an important centre of the wool trade and boasts many fine buildings dating back to the Tudor era of the early sixteenth century.

From Cirencester I board the hourly Stagecoach 51 Cheltenham-Swindon service. Its hour-long trip to Swindon bus station largely avoids the fast A419 trunk road, instead meandering through the attractive village of South Cerney and later making a welcome detour midway through the journey into another pleasant Cotswold town, Cricklade, which boasts being the first town on the River Thames.

A bonus for leisure travellers on the 51 route is that it is normally operated by double-decker buses, giving the chance of a top deck view of the passing countryside. Once at Swindon, the town’s bus station is only just around the corner from the railway station, so my 15.55 arrival left plenty of time to change modes of transport and catch the 16.36 GWR service for Cheltenham Spa.

The Golden Valley Line from Swindon to Gloucester has long been a favourite of mine, passing through well-preserved stations at both Kemble and Stroud, and the real highlight being its wonderfully scenic descent from Brunel’s Sapperton Tunnel down the Stroud Valley after the former station at Chalford, as the railway runs alongside the yet-to-be restored Thames & Severn Canal.

So after successfully completing my day out with another Stagecoach D bus trip, this time from Cheltenham Spa (Lansdown) station back to the Racecourse park & ride, how much of a bargain really was my Discoverer pass?

On each leg of my journey I made a point of checking the fare, and by the time I had got back to the racecourse I would have spent £34.45 had I been buying single tickets (using a railcard where possible) for each journey I made. Having only actually paid just £6.90, I do feel that I not only had a marvellous and environmentally-friendly day out, but also a remarkably cheap one that I can highly recommend.