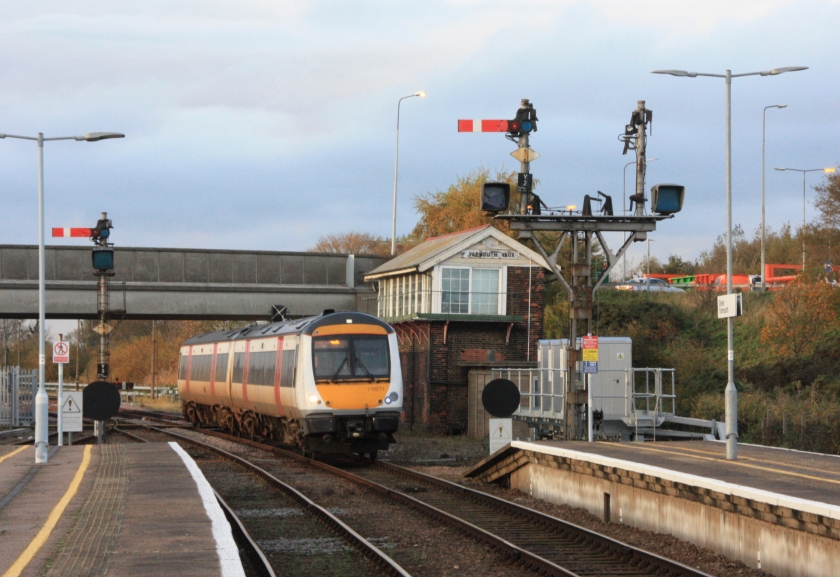 Grandest of the seven surviving signal boxes along the Wherry Lines from Norwich to Great Yarmouth and Lowestoft must surely be Yarmouth Vauxhall, a Great Eastern Railway type 4 Design that dates from 1884 and boasts a 63-lever Saxby & Farmer frame.

Unlike many other historic signal boxes, its appearance has not been ruined by the replacement of traditional glazing with ugly uPVC windows. But its days are sadly numbered and its levers will be pulled for the last time less than three months from now, for the 23.34 service to Norwich on Friday, 31 January 2020.

That departure heralds a three-week closure of the route starting on Saturday, 1 February to complete the delayed and protracted process of commissioning new signalling on the Wherry Lines network that should also see a long-overdue re-opening of the route to Reedham via Berney Arms.

Before the rationalisation and re-signalling began: on Saturday, 3 September 2016 153322 arrives with the 14.18 non-stop service from Norwich

Great Yarmouth is like many other British seaside termini that has seen better days. Its long and curving platforms are a reminder of the huge summer holiday traffic that, as recently as 2014, saw the Saturday arrival of numerous through services from London Liverpool Street.

Prior to re-signalling there has already been some rationalisation here, notably through the 2017 removal of platform 1 and signal Y1, which leaves the station, like neighbouring Lowestoft, with three working platforms, numbered 2-4.

Never to be displayed again is the illuminated R indicating that the train will run via Reedham. On 3 September 2016, 153322 is signalled that way with the 14.55 summer Saturday non-stop service to Norwich

Unlike Lowestoft, Yarmouth Vauxhall has no remaining semaphores on the station approach, apart from a small shunting arm (Y38) controlling exit from its long- abandoned carriage sidings. Its remaining trio are a bracket close to the signal box where Y2 controls exit from platform two, with two separate home signals for exit from platform 3 (Y3) and platform 4 (Y4) – as seen below.

Immediately beneath each arm is a route indicator box that will remind a driver if he is signalled onto the direct route via Acle by displaying an illuminated letter A, or via the Berney Arms route (currently closed), for which a letter R denoting Reedham would have been displayed.

There were also small shunting discs to control access to the carriage sidings, with the one below Y2 at platform level, while those below Y3 and Y4 were mounted just below the route indicator boxes. Like Y1 however, these were removed during the 2017 infrastructure rationalisation.

Paying what is likely to be my last visit to the town before the loss of its signalling (Tuesday 5 November 2019) it was good to see some heritage action in the shape of very filthy 37424 (37558) and 37402 departing with the Railhead Treatment Train on its seasonal circuit from Stowmarket.

Once again I was struck by the absence of new Class 755 units. Had my train from Liverpool Street not been delayed by a failed Class 745 unit outside Ipswich I would have been able to take one on the 12.36 ex-Norwich, but my 13.36 journey was aboard a pair of Class 153 units, and the return on 170271, seen arriving at 15.13 in the top photo.

My October 2019 feature on Britain’s most easterly semaphores (Lowestoft) is here: https://railwayworld.net/2019/10/09/britains-most-easterly-semaphores/#more-3202  “Britain’s last mechanical signalling” is out now and is available from publishers Pen & Sword and from many online retailers. 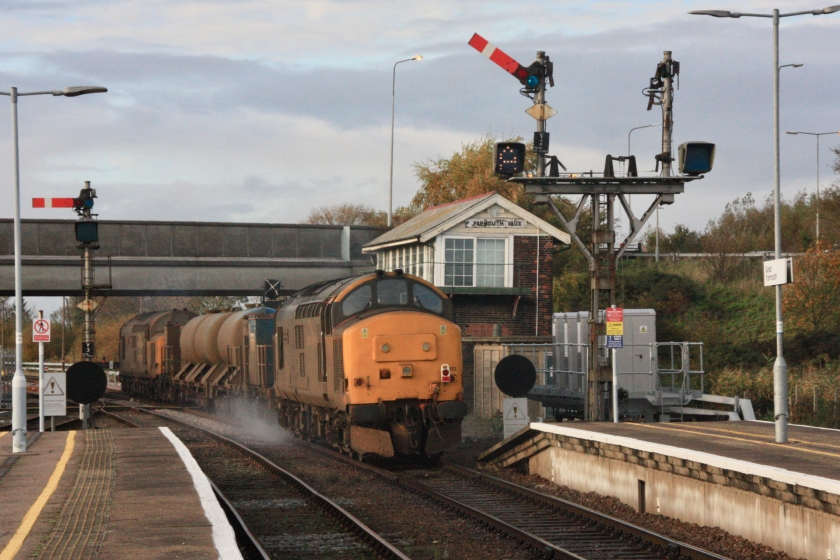 One thought on “The end is nigh at Yarmouth Vauxhall”