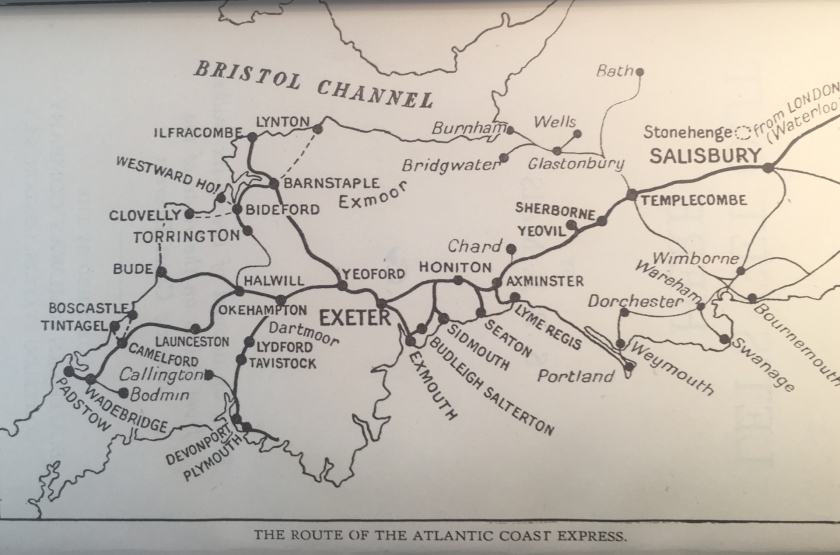 Today it would unquestionably be regarded as one of the UK’s most scenic rail journeys, but sadly the six miles of railway line from Wadebridge to Padstow was lost to the network in January 1967. Now the only way now of travelling these final miles of the famous Atlantic Coast Express (the ACE) are on foot, or by bike, along what has now become part of the hugely popular Camel Trail.

Taking a delightful and leisurely two-hour stroll, it is not difficult to imagine those final nine minutes aboard the ACE as it neared the end of its 259¾ mile journey from London Waterloo (11.00) and had seen portions of the train detached along the way for Exmouth, Sidmouth, Bude, Plymouth, Ifracombe and Torrington, before the remaining three coaches finally reached the Padstow buffer stops at 5.21pm.

Along with all of the former Southern Railway routes west of Exeter (apart from Barnstaple Junction and Okehampton) the North Cornwall lines from Okehampton to Bude and Padstow succumbed to closure during the Beeching era, having lost their through services in September 1964 – less than three years before final closure – and then been deliberately run down under the short-term custodianship of British Railways’ Western Region.

Travel today on a train to St. Ives or to Newquay (destination of the latter-day ACE) and the huge number of passengers to these last rail-served resorts on Cornwall’s Atlantic Coast shows what might have been, if the sea-food capital of England had not been deprived of its rail connection more than half a century ago. 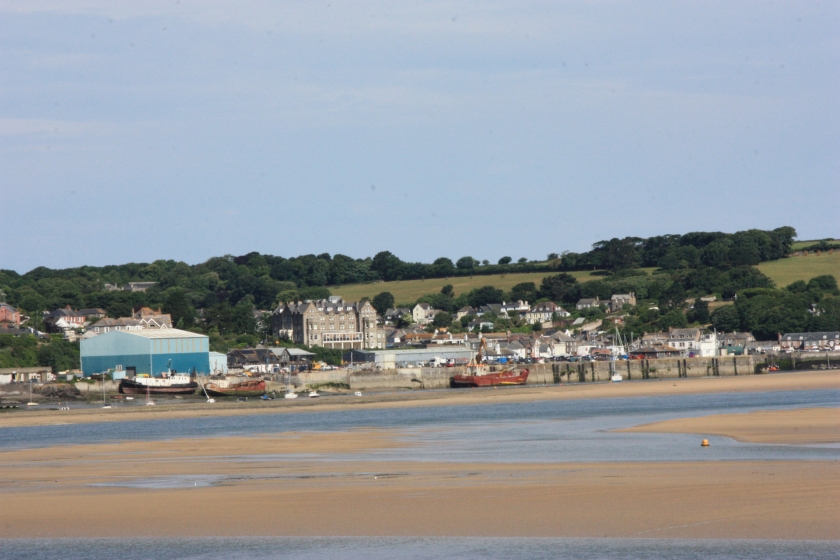 A view of Padstow from the railway near Little Petherick Creek. The station stands between the Metropole Hotel – the large building near the centre of this picture – and the blue warehouse building on the left.

Efforts are being made to return trains to Wadebridge, with a potential five-mile westward extension of the splendid Bodmin & Wenford Railway from its current terminus at Boscarne Junction. But extensive building in the centre of Wadebridge makes re-opening beyond the town and on to Padstow look like a step too far. 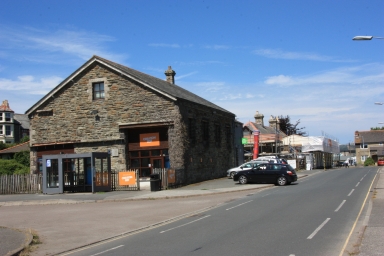 Wadebridge station and the adjacent goods shed survive in community use, with the station (currently being restored) dedicated to the late poet laureate Sir John Betjeman. This June 2018 view shows the goods shed, with station building behind and work being undertaken to restore the station canopy.

Betjeman was a great fan of the ACE, which was commemorated in a book called Summoned by Bells on his holiday reminiscences, describing Wadebridge-Padstow as “the most beautiful train journey he knew” and including these immortal lines: “On Wadebridge station what a breath of sea / Scented the Camel valley! Cornish air, / Soft Cornish rains, and silence after steam…” 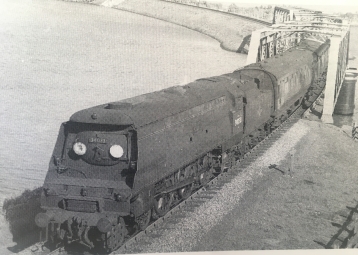 Approaching the end of the line on 17 May 1962, West Country Class 34033 “Chard” comes off Little Petherick Creek Bridge with the Padstow portion of the ACE. Photo: SC Nash

A longstanding magnet for railway enthusiasts to the town was survival until the early-1960s of a trio of 2-4-0 tank locomotives, known as Beattie Well tanks. These dated back to the 1870s and owed their longevity to being the only locomotives that were small enough to work china clay trains from nearby Wenford Bridge. The last of this trio (30587) survives in preservation on the nearby Bodmin & Wenford Railway. 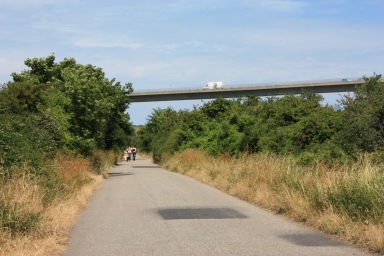 Setting out from Wadebridge on the final miles of the ACE, the first thing that looms ahead on leaving the town is a feature that Betjeman would never have seen. This is the large concrete span of a bridge carrying the A39 trunk road across the River Camel. It is one of only two over-bridges on the route to Padstow, the other being a brick arch around a mile or so further on. 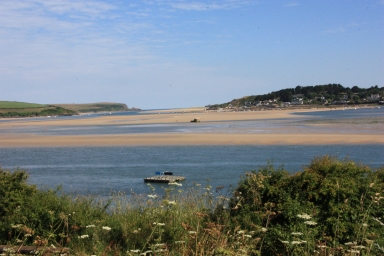 For much of the route onwards to Padstow there are fabulous views of the ever widening Camel Estuary, with the town of Padstow visible in the distance and the village of Rock on the opposite side of the estuary, seen in this view, with Little Peterherick Creek Bridge below. 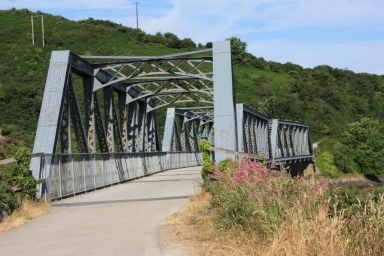 Besides this impressive vista, the finest feature of this stretch is the three steel spans of the Little Petherick Creek Bridge, an iconic feature of the route in the days of steam, when it was subject to a 15 mph speed restriction. 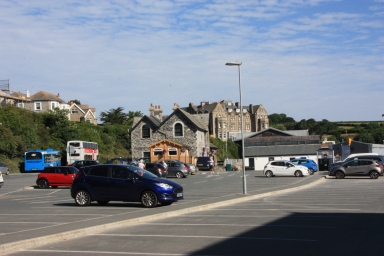 So, to journey’s end in the attractive town of Padstow, where once again the station building survives. It still serves as a bus terminus, but is surrounded now by car parking and new developments, although the Metropole Hotel continues to dominate the town beyond, just as it did in the days when guests arrived on the ACE.

For more about the ACE, and an evocative account of its route, I can highly recommend “From the Footplate – Atlantic Coast Express” by Stephen Austin (Ian Allan, 1989) 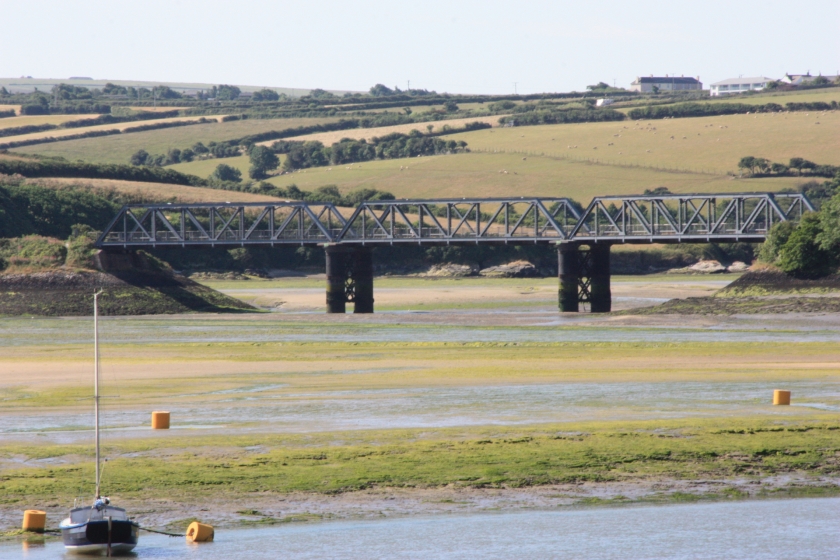