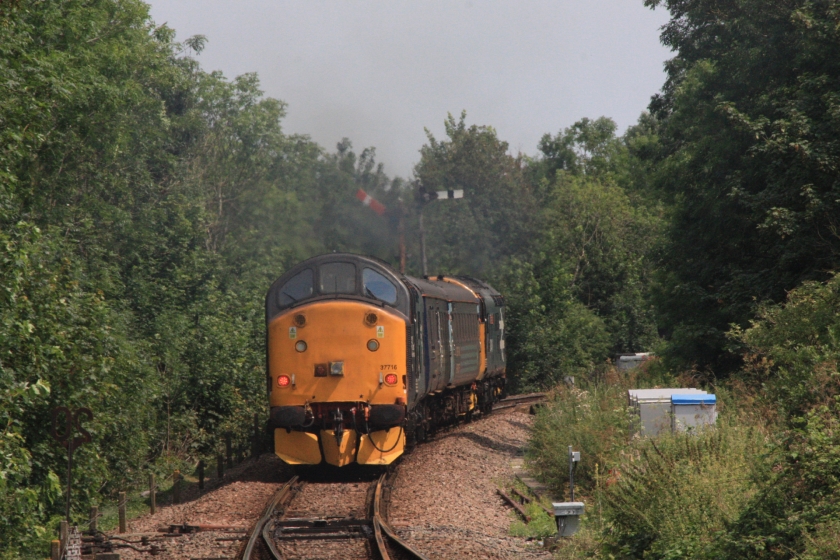 Paying what will surely be my last visit to the wonderful Wherry Lines before the end of Class 37 operations, my quest this time (Friday, 26 July) was not just to savour more loco haulage, but also to find another of the network’s working distant signals.

Bearing the memorable number A1, this is the up distant at Acle, sole passing loop on the 12¾ miles of route from Brundall to Great Yarmouth, and one of seven semaphores controlled by the station’s diminutive 1883-vintage 20-lever Great Eastern Railway signal box, which stands at the western end of the down platform.

Signal A1 is the only one of that seven that cannot be seen from the station itself and requires a pleasant ten minute walk along a path from the south side of the station, crossing a road and then continuing on a path through Damgate Woods until it reaches the Weavers’ Way long-distance footpath close to a foot crossing of the line.

Having reached Acle on a hastily-arranged replacement coach when the Class 37s failed to materialise for the 10.36 from Norwich (the previous workings also having been cancelled), my day got even worse when I decided to try to get a closer shot of A1, but fell up to my chest in a muddy ditch running across a field I had attempted to cross between the railway line and A47!

Vainly waiting rather sodden in the middle of the field to see A1 pulled off for the 11.44 Great Yarmouth-Norwich, I realised that this was one of numerous other cancellations on Friday when single car 153309, which would have crossed the up service at Acle, passed by with the 11.36 Norwich-Great Yarmouth (pictured above).

Returning to the station my luck began to turn, with a few shots of the single car unit on its return to Norwich and then, half an hour later, when normal service resumed with the short set, after failed 37424 Avro Vulcan XH558 (37558) had been replaced by 37407 Blackpool Tower at the country end of the two-coach formation, with 37716 at the rear (Norwich end). 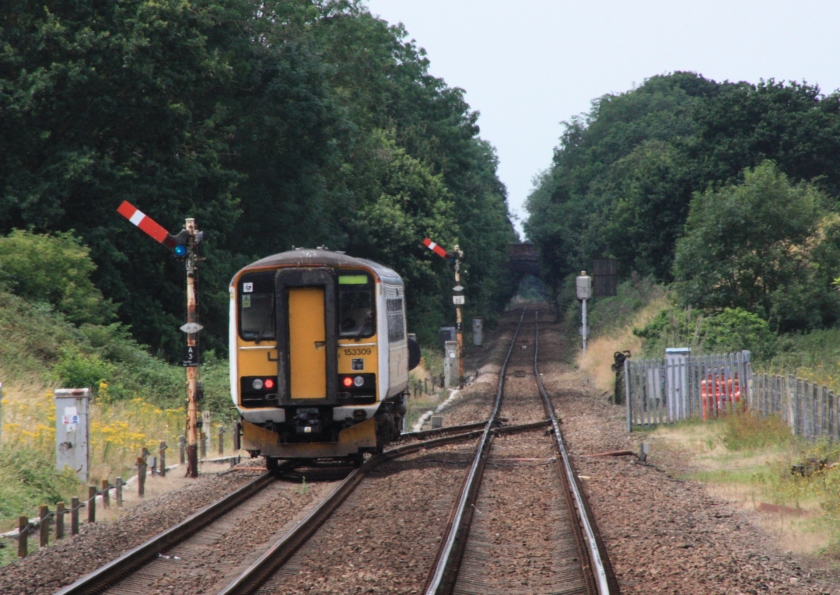 The footbridge at Acle station offers an excellent vantage point from which to see trains and signals – looking east, there are a trio of semaphores in view as the line bears round to the right, with down starter A17 at the end of platform 2, down section signal A16 around 200 yards beyond and very close to up home signal A2. 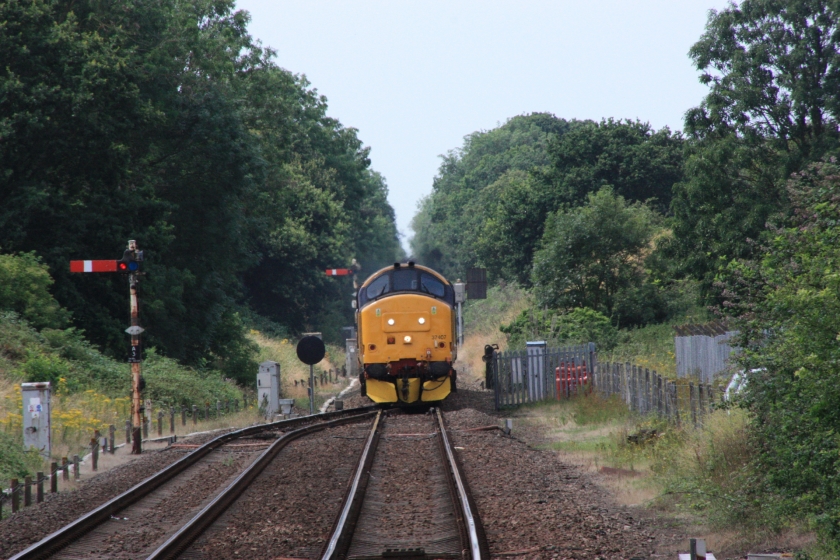 Turning in a westerly direction towards Norwich, the trio of semaphores in view here are up starter A3 at the end of the lengthy passing loop (there is an electronic banner repeater opposite the signal box, as this signal is out of sight from the cab of a train in the up platform) up section signal A4 beyond and, close by, down home A19 behind a sighting board.

Acle’s main building is impressively preserved and now used as holiday accommodation, with old enamel signs adding period touches to a station which was a past (2005) winner of “best unstaffed station” in the Anglia region and two years later (2007) was chosen as “best medium station”. 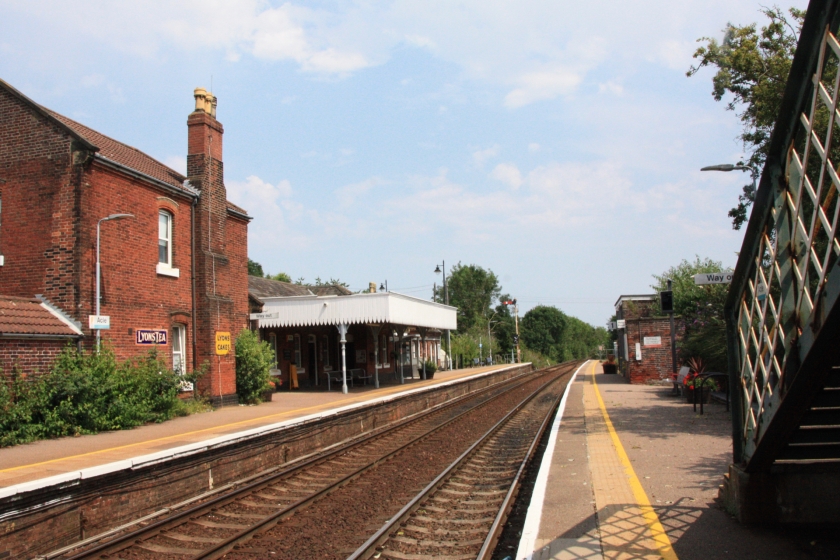 This is a pleasant and sleepy spot, serving a small market town midway between Norwich and Great Yarmouth, which generally has an hourly service and no trains crossing at the loop. That all changes on Summer Saturdays, when additional hourly services operate, most of which are not timetabled to stop.

The station is also meant to see four additional trains passing in each direction on Mondays and Fridays only during the peak summer period from 22 July until 6 September which, unlike the Saturday extras, are all timed to call at Acle, with the exception of the first up extra service (09.45 from Great Yarmouth).

UPDATE: 13.00hrs on Monday, 29 July – have just heard the sad news that Class 37 operation has now ceased, with the first Stadler Class 755 unit entering service. So here (below) are 37407/716 standing in platform 5 at Norwich on the final weekday of short set working. 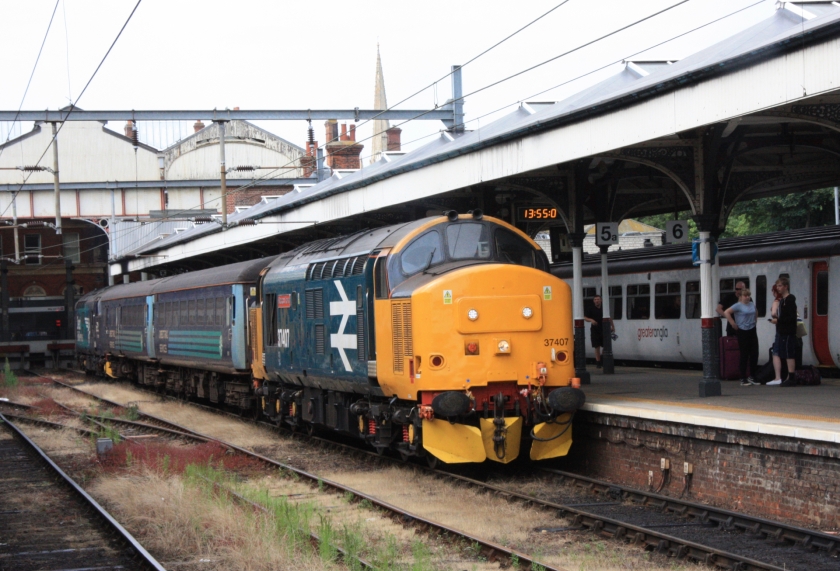 For anyone interested in staying at Acle station (Station Cottage), the number to contact is 01493 751136.  My new book “Britain’s last mechanical signalling” is out now, and available from publishers Pen & Sword and from Amazon and Waterstone’s 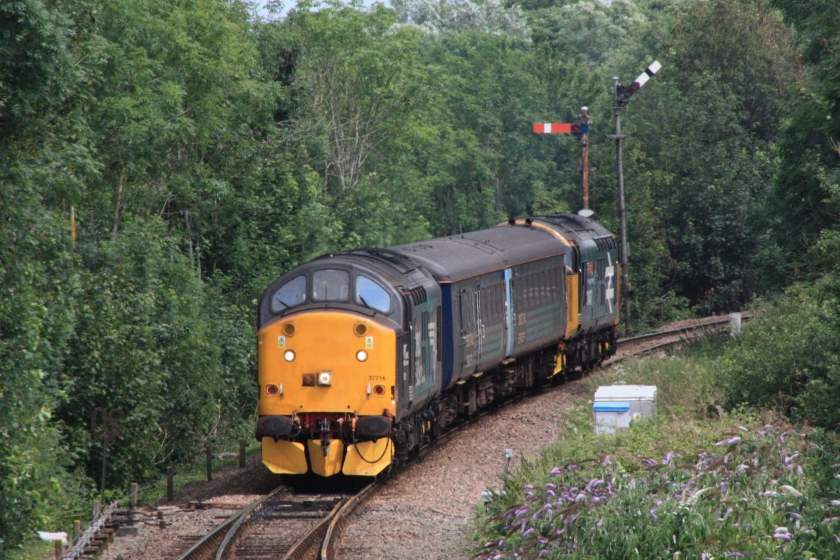