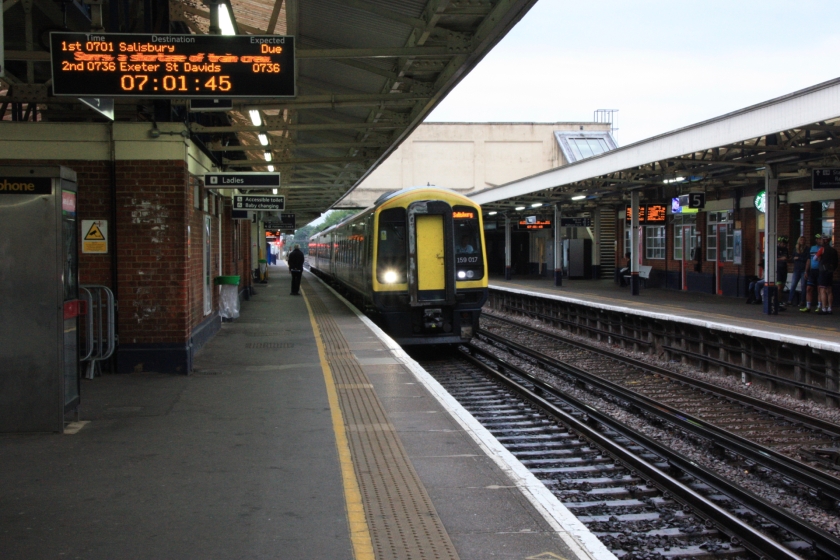 Just three weeks after my previous failed attempt to sample the summer Saturday SWR service to Weymouth and Corfe Castle (6 July), it is profoundly disappointing to have suffered a similar experience again on Saturday (27 July)

Despite an assurance given to me the previous day from the SWR media team (who had kindly given me a ticket after the previous debacle) that the service would be running as planned, it was once again terminated at Salisbury due to “crew shortage”.

Talking with other would-be passengers to the staff at Salisbury station, it seems that this is a pretty regular issue, and that the Weymouth and Corfe Castle service only actually runs about 50% of the Saturdays it is supposed to operate.

During my journey from Woking (07.01) to Salisbury on Saturday I spoke to a man who had come down from Manchester and was staying in Andover, just so that he could sample the rare opportunity to take a direct service to Corfe Castle station on the Swanage Railway.

What added to the frustration on Saturday was to discover that the Corfe Castle services had not been entirely cancelled (as happened on 6 July), but only the all-important journey from Salisbury to Yeovil and Weymouth, that would have picked up large numbers of passengers at stations west of Salisbury. 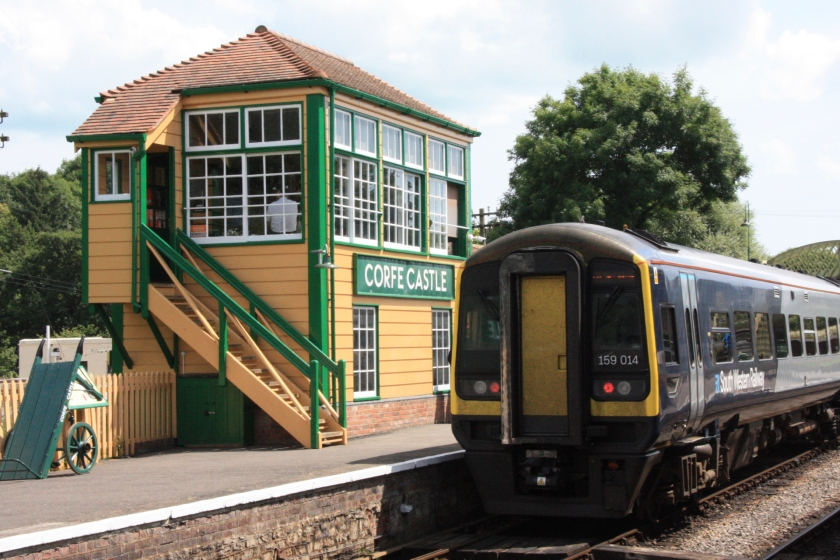 Unbeknown to me and my fellow would-be travellers at Salisbury, a 3-car Class 159 unit had been despatched empty from Salisbury depot half an hour before our 08.05 arrival and was run directly to Weymouth via Southampton in order to start the day’s timetable from there.

Faced with another wasted day on the rails, I decided to press on to Yeovil Junction, with the intention of then making my way by bus to Pen Mill station and travelling from there on a GWR service to Weymouth, before returning home.

But learning on the way to Yeovil that Corfe Castle shuttles were indeed running, I changed my plans and decided to head for Wareham where, with luck, I would be in time for the second SWR shuttle train of the day, departing at 13.12.

Arriving at Yeovil Junction it was annoying to see that the bus link to Pen Mill no longer operates. Instead there is a poorly-timed connection at the town’s bus station with another bus, or the option I took of a 15 minute walk from there to Pen Mill along the dismal Sherborne Road.

Pen Mill (pictured above) remains charming as ever, with its semaphores and an independent cafe on the station, so after a photographic interlude here that helped avoid an excessive wait at Wareham, I continued on to Dorchester West at 11.18, before taking the five minute walk to Dorchester South.

Reaching Wareham at 12.28 gave time to see unit 159014 arriving wrong line from Worgret Junction before crossing to the up line (pictured above) and then continuing to Poole. Returning from Poole at 12.58, we proceeded onto the Swanage Railway, arriving in Corfe Castle on schedule at 13.30.

Having left Haslemere station at 06.15 to join the seaside special at Woking,  what would have been a rather leisurely four hour 20 minute journey that got me to Corfe Castle at 11.35 had turned into a seven hour 15 minute epic, something only a die-hard enthusiast would ever contemplate. 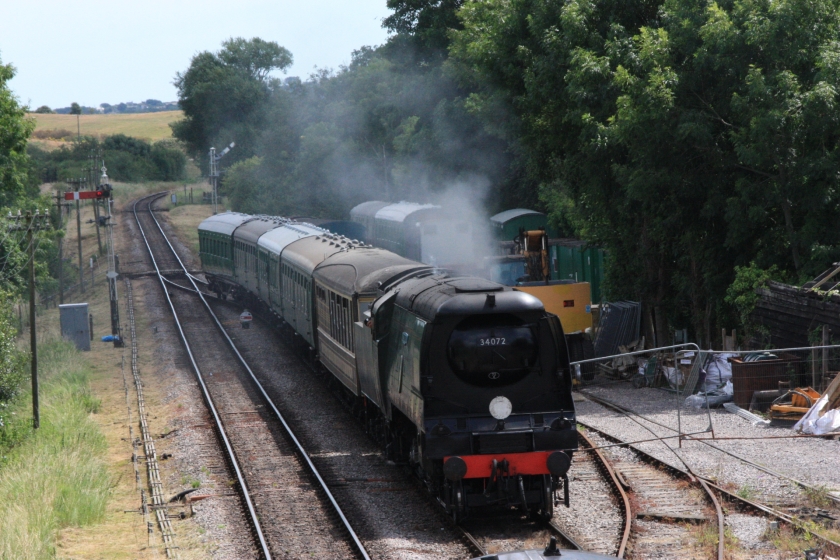 Once at Corfe Castle, however, there was a little time to savour the wonderful location and to see and travel on the Swanage Railway’s steam services, which were in the hands of un-rebuilt Battle of Britain Class 34072 257 Squadron and Ivatt 2MT 46521.

This is a fabulous day out, made all the more attractive by the bargain fares offered from stations west of Salisbury and Bournemouth, and there is obvious enthusiasm for it from all the SWR crew involved and their Swanage Railway counterparts, so why has it become so unreliable? 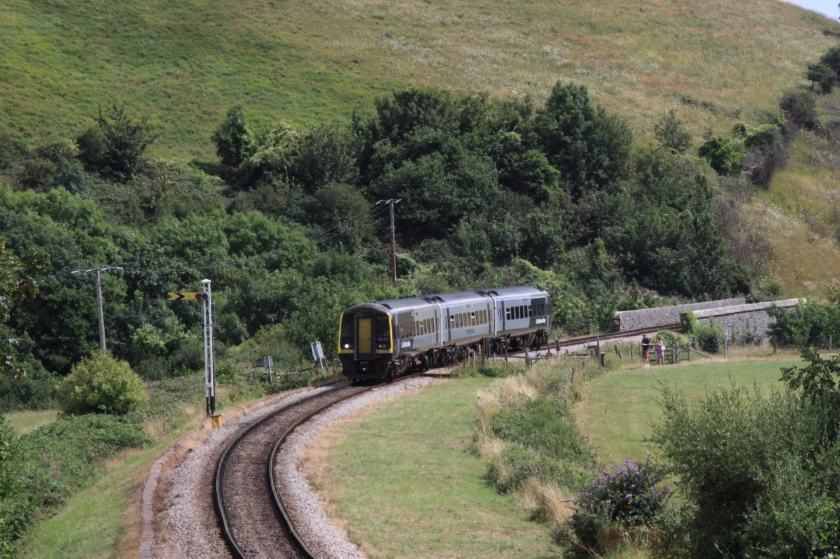 I can accept that there are limited numbers of SWR crew at Salisbury who are signed to operate a route (Yeovil–Weymouth) that is only served once a week, but the goodwill and new passengers which this service can attract, as I noted last summer, should surely give it some priority when it comes to staffing.

It is wholly unacceptable that this service is advertised as running, then is summarily cancelled at incredibly short notice – and leaves me wondering if there is something in the water at Salisbury that means crews suddenly become unavailable to work this mythical service.

The sorry saga of cancelled trains seems such a missed opportunity for operator SWR to build some of the goodwill that was evident last year, and I feel for all those would be day-trippers in places like Gillingham and Sherborne who are being left high and dry by the short notice cancellation of their seaside special. 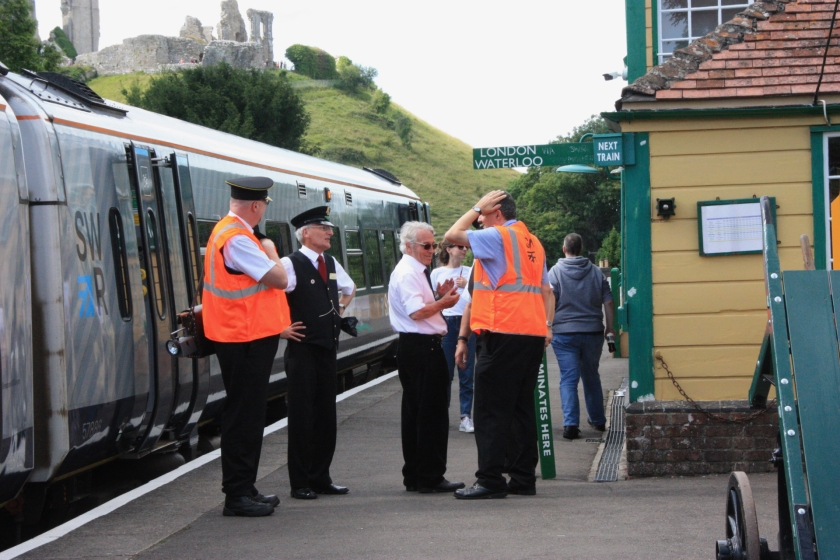 Sincere thanks to David Murdoch in the SWR press office for arranging my 27 July trip. My new book “Britain’s last mechanical signalling” is out now – details on the home page.