Taking heed of Government advice to avoid making all but essential rail journeys, the current potentially dismal and very challenging period seems like a good moment to look back to better times, when we were all free to travel at will.

Over the coming weeks I plan to go back almost exactly three years to the time during spring and summer of 2017 when I was touring Britain to get photos and anecdotes for my signalling book, and beginning today with a visit to the North Staffordshire Line.

For those unfamiliar with it, the 35 miles of double track route between Derby and Stoke-on-Trent boasts a total of seven signal boxes, of which five control semaphore signals, and four of which I was able to visit during a trip to the area by train on Saturday, 25 March 2017. 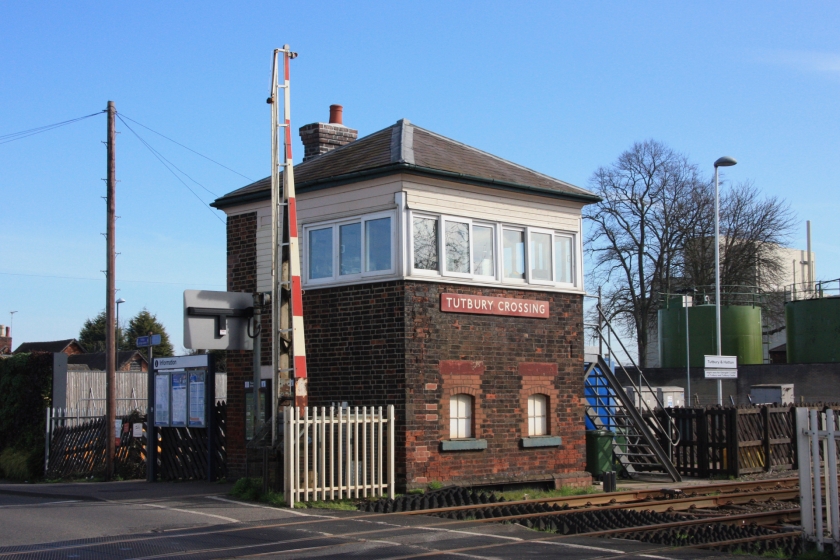 This is a very interesting line on which to spend a day, and among the North Staffordshire route’s attractions are one of the UK’s oldest working signal boxes, at Tutbury & Hatton (Tutbury Crossing), which dates from 1872, and also the very last mechanical signal box to be opened in Britain, at Uttoxeter (1981).

EMT 153319 arrives at Tutbury & Hatton on 25 March 2017 with the 11.56 departure for  Crewe. Note the huge Nestle instant coffee factory standing behind the signal box

At the time of my 2017 visit, the hourly Derby-Crewe services were being operated by East Midlands Trains (RIP) and on the day of my visit were formed entirely of class 153 units, in two cases operating as single cars (153319/384) and another as a pair (153379+383). There did not seem to be any other traffic.

Beginning the day at Stoke-on-Trent, I travelled first to Tutbury & Hatton, where I had arranged for a taxi to take me to and from the box at Scropton Crossing, a couple of miles away. I then returned as far as Uttoxeter and later alighted again at Longton, in order to see the signals controlled by Foley Crossing Signal Box. 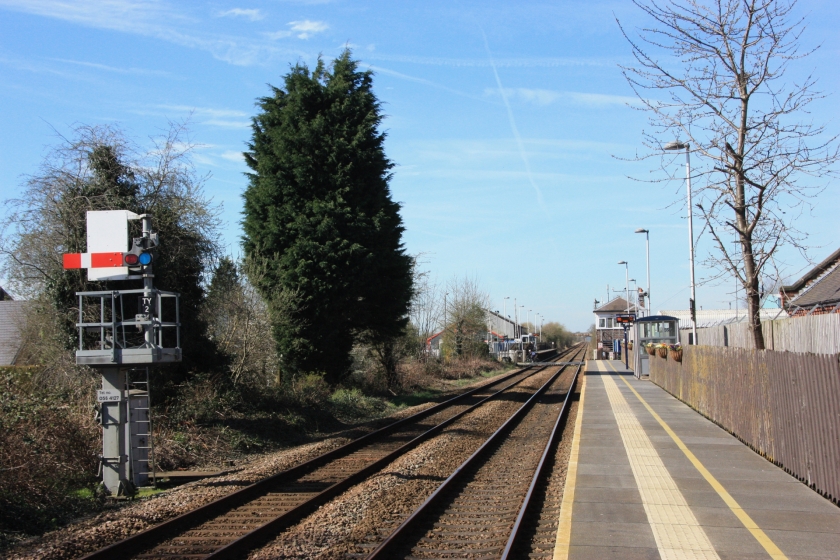 A view of Tutbury & Hatton station looking west, with Tutbury Crossing’s very modern down home signal TY2 on the left and up home TY6 beyond the signal box

Tutbury & Hatton station was a Beeching closure in 1966 that re-opened in 1989, with the historic and Listed Tutbury Crossing Signal Box standing on the north side of the line between the station’s staggered platforms, and controlling a busy level crossing. Its two home signals are TY6 in the up (eastbound) direction and modern TY2 on the down line, with its two distant signals sadly not in view. 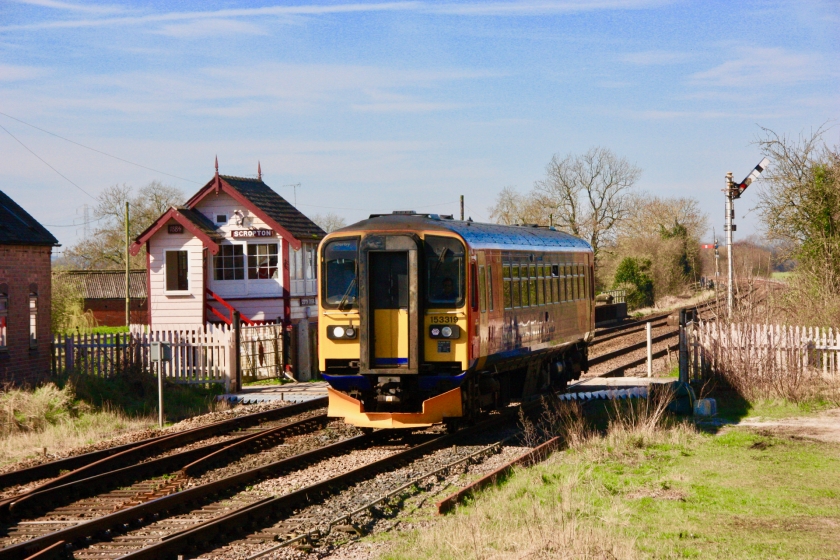 Scropton Crossing is a rather delightful spot, where a North Staffordshire Railway box dating from 1884 controls a little-used road crossing and has six semaphores, with distant, home and section signals in each direction (SN1/2/3 in the up and SN19/18/17 on the down). Once again the stop signals can all be seen from the crossing, but the two distant signals are out of sight.

While visiting the box at Scropton Crossing the helpful and knowledgeable signaller who had kindly invited me in pointed to an indentation in the ground some way in the distance and told me that it was the site of a huge disaster during World War II that became known as The RAF Fauld explosion.

At just after 11.00 on the morning of 27 November 1944 some 4,000 tonnes of ordnance that had been held in an underground storage facility exploded in one of the world’s largest ever non-nuclear explosions, creating what is now known as Hanbury Crater, destroying a local reservoir and killing an estimated 70 people.

Travelling 7¾ miles west from Tutbury & Hatton brings you to Uttoxeter, the principal stop between Derby and Stoke along this route, whose 1981-built signal box stands some 400 yards west of the station and can best be seen from a road bridge close to the station. Walking beyond the signal box, I also found a good vantage point at a level crossing on Hockley Road, as seen below.

Concluding my North Staffordshire day out, I travelled back from Uttoxeter to Longton, one of the Potteries’ Five Towns, and a place where its glorious industrial past is still very much in evidence around the station.

EMT 153384 approaches Foley Crossing with the 14.39 departure from Longton to Derby

The heavily-fortified Foley Crossing Signal Box (North Staffordshire Railway, 1889) stands some distance west of the station, with an up home signal visible from an adjacent foot crossing, while a down home and tall up section signal can be seen from the station’s down platform.