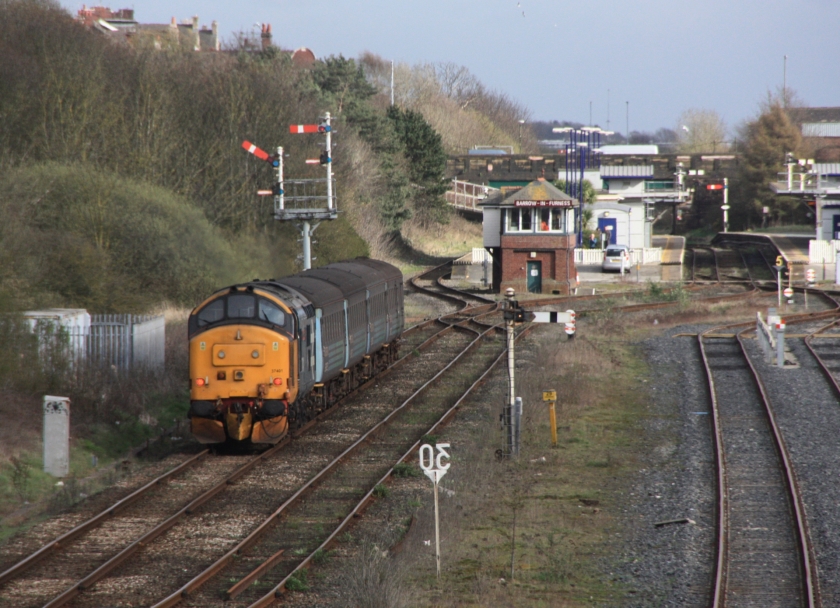 Among all the many trips I went on three years ago in the quest for photos and text for my signalling book, most memorable of all was the week I spent during April 2017 at Barrow-in-Furness, while I explored the wonderful Furness and Cumbrian Coast Lines.

Staying in a bed and breakfast close to the station, which seemed rather more geared to catering for workmen than tourists, I ventured out each day to sample the large number of mechanically-signalled locations, extending almost 100 miles from Wigton to Arnside.

This was not only a stretch of line with an abundance of semaphore signalling – a total of 17 signal boxes and two gate boxes – but was also one where there were two diagrams each day scheduled to be worked by Class 37 locos, although failures and substitution by DMUs seemed a pretty regular occurrence.

In the first of two reminiscences we will begin at Barrow, and then take a trip eastwards along the highly-scenic Furness Line, to take a look at semaphore and loco action around its three principal intermediate stations – Ulverston, Grange-over-Sands and Arnside.

Barrow-in-Furness may not be most people’s idea of a Lake District tourist hot spot, but the industrial town has a lot to offer the railway enthusiast. Its three-platform station is a 1950s replacement for one destroyed by a German bomb in 1941 that thankfully spared its 1907 Furness Railway signal box, which stands at the western end of platforms 2 & 3.

Looking east there are up starter signals at the ends of platforms 1 & 2 with a tall up section signal visible some distance beyond the road over-bridge. But most interest lies to the western side of the station, where there are extensive stabling sidings and a number of semaphores, including a pair of brackets for the down home signals on platforms 1 & 2 and shunting arms beneath.

Alongside the two through platforms (1 & 2), platform 3 is a terminating platform for Cumbrian Coast services to Carlisle, which depart behind the signal box before entering a loop, with a down section signal controlling exit from that loop onto a single track section of route to Park South Junction. In the up direction, a junction signal has two main arms and shunting arms below.

By far the best vantage point of the station layout, signals and stabling point (except on a bright sunny morning) is one from a road over-bridge carrying Devonshire Road, that can be reached by taking a ten-minute walk along Holker Street towards the football ground, before turning right and onto the bridge

Before the football season was halted for Coronavirus, Barrow AFC was setting the pace in the Vanarama Conference and poised for a return to the Football League after an absence of almost 50 years. As a schoolboy I still remember the fateful day in 1972 when Barrow dropped out of the League, to be replaced by Hereford United, so it is great to see the team set for an overdue return. 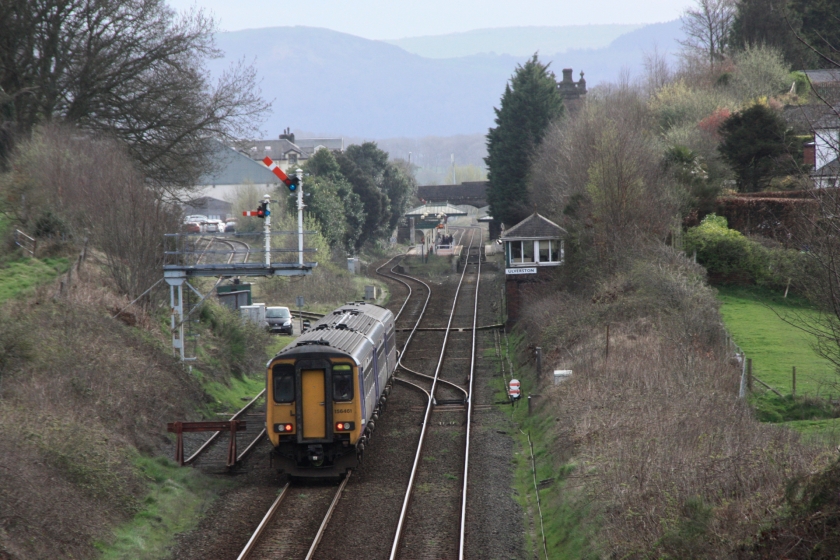 Heading 9¼ miles eastwards from Barrow, and passing Dalton Junction along the way where the short Barrow avoiding line from Park South Junction comes in on the left, brings you to the attractive Grade II-Listed station at Ulverston.

Its unusual layout is like Yeovil Pen Mill in having an island platform and a main (down) platform, with platform 2 not in use (and not numbered), meaning all up trains serve platform 3 and down train doors are only opened on platform 1.

Once again the best panoramic photos of the station and its semaphore signalling can be had by heading westwards away from the station. A brisk 15 minute walk along the main road towards Barrow brings you to the A590 over-bridge, where there is a fine and uninterrupted view back towards the signal box and station. 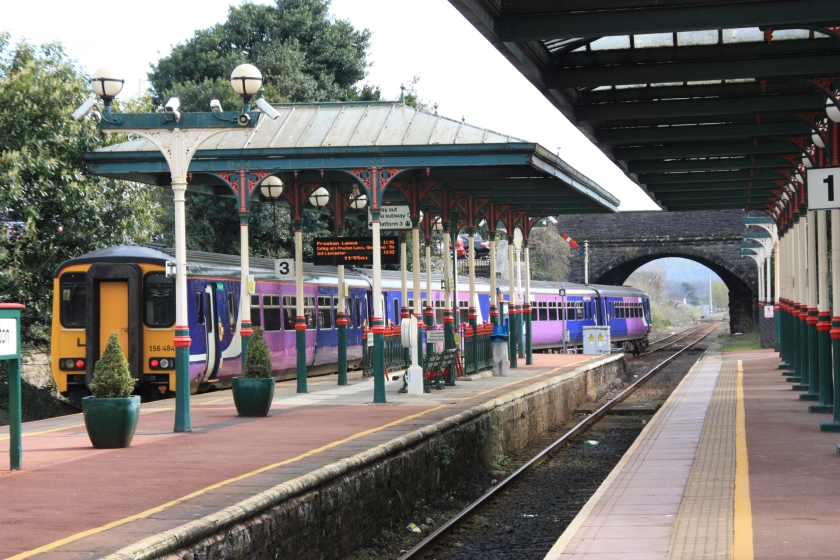 Signalling interest here comprises an up starter just beyond the platform ends, and a down home signal alongside the disused western end of the island platform, as seen in the two photos above.

Ulverston’s 1900-vintage Furness Railway signal box stands around 300 yards west of the station, with a down section signal beyond, immediately in front of the A590 road bridge. In the up direction there is a bracket carrying a home signal and a separate shorter shunting arm for access to a siding opposite the signal box (as seen below). 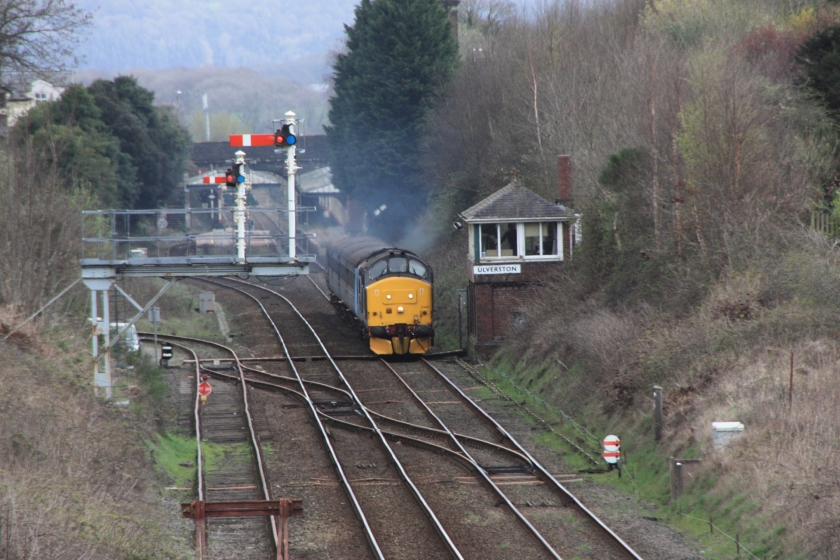 Ten miles further on, and after passing another couple of smaller intermediate stations (Cark and Kents Bank), we arrive in the genteel resort of Grange-over-Sands and another Grade II-Listed station.

Its signal box, however, is in marked contrast to the Furness Railway survivals at Barrow and Ulverston, being a British Rail London Midland Region design from 1956, which stands just beyond the station on the south side of the line.

Grange-over-Sands is a wonderful place to view trains and semaphores, with the first of two fine vantage points being a footbridge east of the station, which can be reached by taking a short walk along the Cumbrian Coastal Way footpath on the seaward side of the railway line, taking you behind the signal box.

For a good view of the down starter and the up home signal beyond it, go into the park on the town side of the railway, very near the station, and stand close to, or on, the fifth bench along, where there is a fine view of trains passing the two signals, and the attractive town as a backdrop, as the line curves to the left (photo below). 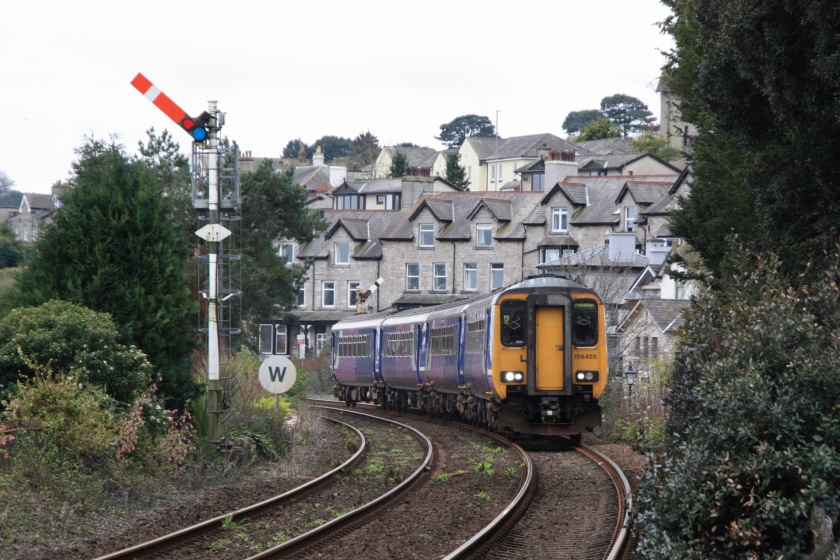 One final outpost of semaphores on the Furness Line towards Carnforth and Lancaster comes just 3¼ miles beyond Grange-over-Sands, after the train has passed over the 50-span Arnside Viaduct across the River Kent estuary and reached Arnside station, home to another Furness Railway signal box (1897), which is also Grade II-Listed.

From the station platform you will see an up starter at the eastern end of the station, while looking back towards the signal box and estuary, a down home stands opposite the box with an up home at the end of the viaduct. 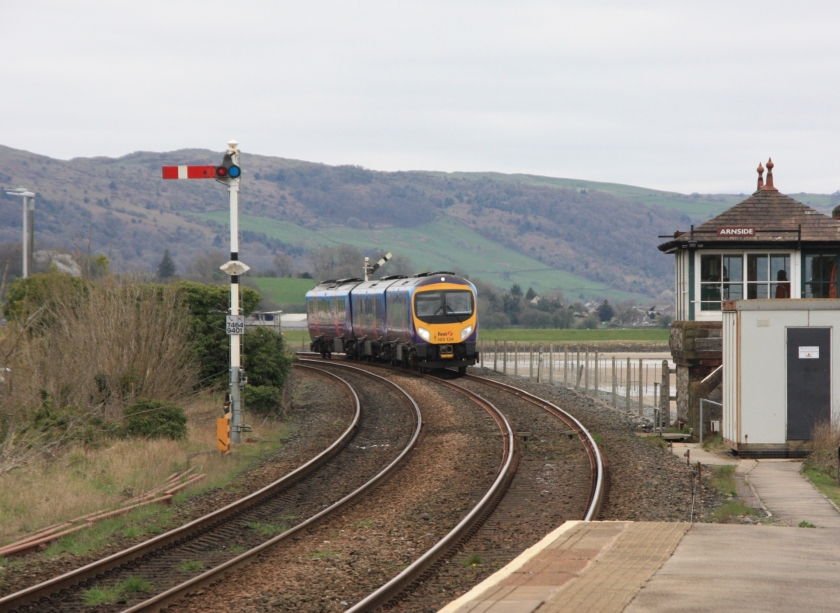 Take a walk to one of the popular pubs overlooking the viaduct and there is a chance to see a down section signal just before the viaduct, with an up distant signal just visible at the far end of the viaduct. 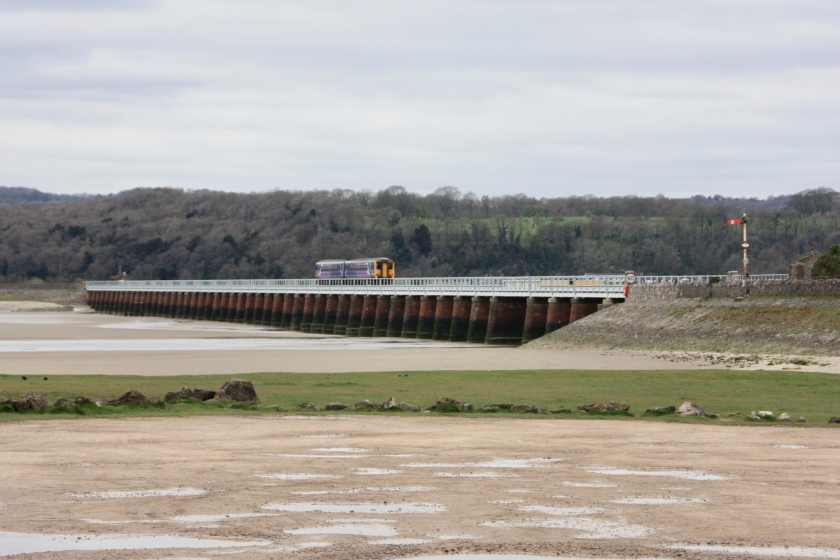 Look out for part two of this feature next week, with semaphore signalling and more Class 37 action along the Cumbrian Coast to Workington and Wigton 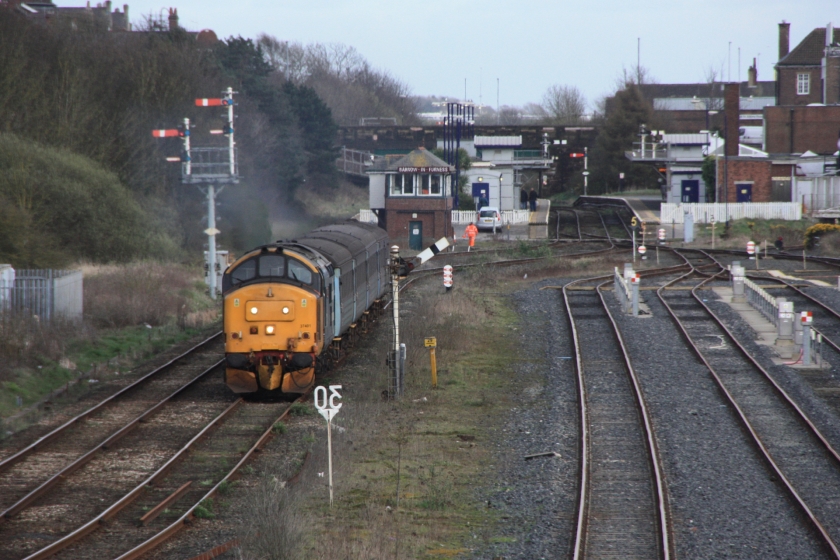