During this week 59 years ago my late father, Trefor David, embarked on a remarkable week-long tour of Wales from his home near Cheltenham Spa, using a Freedom of Wales ticket that cost him £5 and an Area 9 Runabout ticket, giving unlimited travel between Cheltenham, Newport and Hereford, for 25/- (£1.25).

Just as I have done on more recent rail travels around the UK and Europe, he kept a written record and a photo album of his journeys, most of which were by steam, and covering many routes that would very soon succumb to closure.

In transcribing his diary and scanning some of his photos it is interesting to see how many of the lines he travelled closed well before the infamous Beeching Report was published in March 1963, with the last day of the previous year (31 December 1962) looking like a particularly bleak day for the Principality’s railway network.

This is a record of a week spent on the railways of Wales in June 1961, when the objective was to travel over some of the railway byways while steam was still supreme. It was something of a farewell, and within three or four years many of the lines would be closed to all forms of traction.

The first of three separate expeditions began on Saturday, 3 June 1961 and involved travel on the 6.43am service from Cheltenham Spa (St. James) to Cardiff (General), a 3-car DMU from Cardiff to Neath then the 11.25 (SO) service from Neath (Riverside) to Brecon – a line with a minimal service. 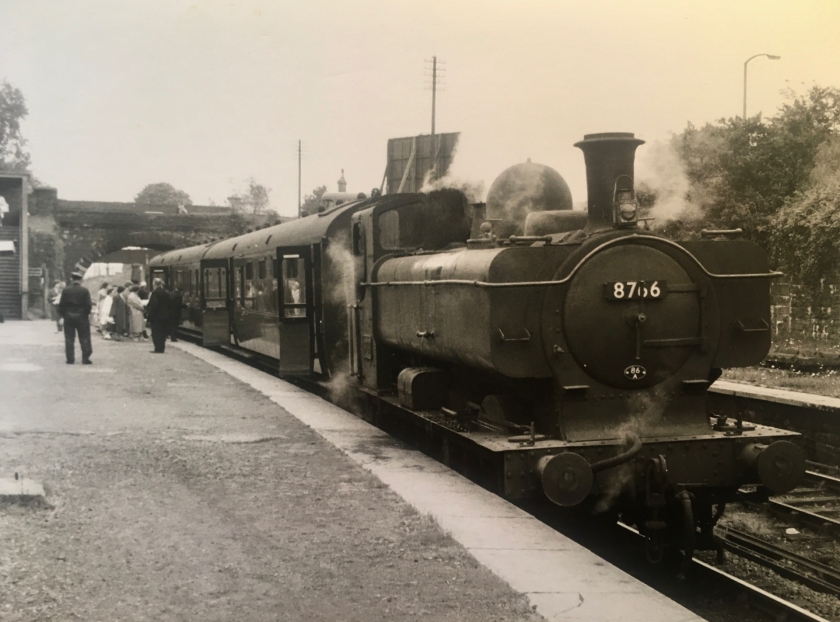 This was followed by a trip over the Brecon & Merthyr on the 2.05pm from Brecon and alighting at Dowlais Top. The closed station at Dowlais (Central) and the sheds at Cae Harris and Merthyr were later visited on foot. 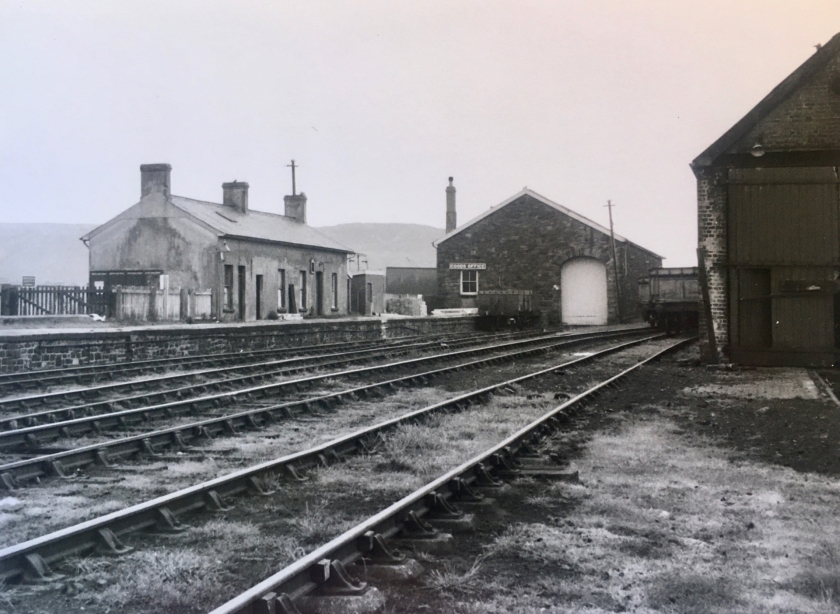 A view of Dowlais (Central) on 3 June 1961, just over a year after its closure to passengers

Departure from Merthyr was on the 5.40pm to Abernant, and unusual formation consisting of 0-6-2T 5624 and one auto-trailer. From Abernant there was more footwork to Aberdare for a shed visit and then lodgings at the Black Lion pub.

*Merthyr-Abernant closed to passengers on 31 December 1962

Saturday night in South Wales was necessary in order to catch the 11.03 Pontypridd to Barry via Wenvoe, a line used on Sundays only. The train consisted of 0-6-2T 6652 and seven non-corridor coaches, making a pleasant contrast to the DMUs already in operation on most valley services.

*Pontypridd-Barry via Wenvoe closed to passengers on 10 September 1962

At Barry there were the first 19 locomotives to be dumped in Dai Woodham’s yard. These included four 55xx class 2-6-2T locomotives, withdrawn after their short-lived workings on some of the Cardiff valleys services, and 0-6-0Ts 9491/2/9, only built in 1954/5. 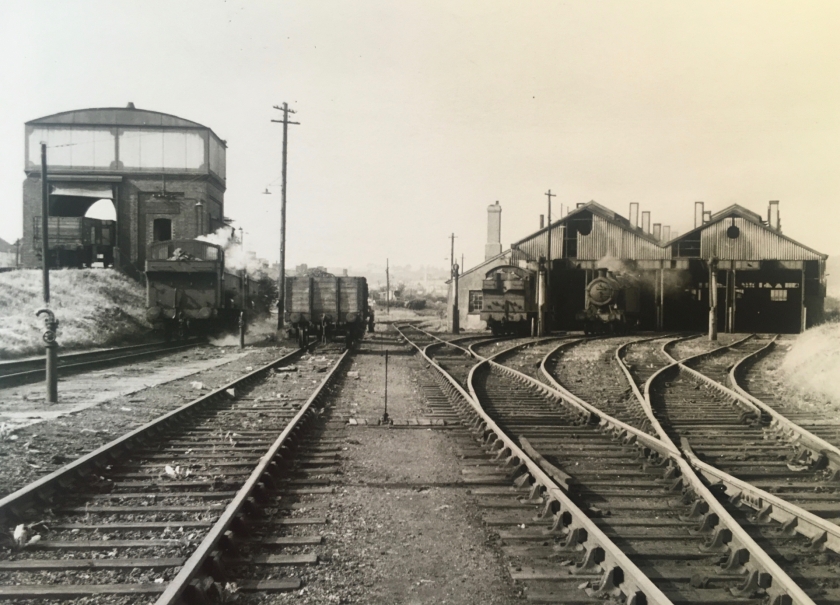 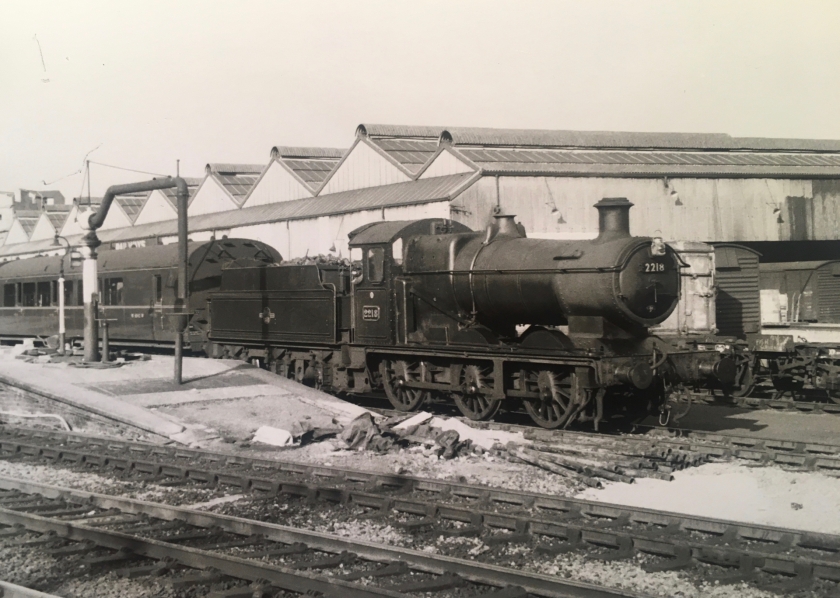 The second part of the tour was a four-day trip to North and West Wales. On Monday, 5 June 1961 I again travelled to South Wales on the 6.43am from Cheltenham Spa (St. James) as far as Newport (High Street).

From Newport to Shrewsbury my train was hauled by 6028 “King George VI”, displaced from the West of England and working out of Canton shed. A 12-minute late departure from Hereford was transformed into a 4-minute early arrival at Shrewsbury.

My plan was to travel via Gobowen, Oswestry and Llanymynech to traverse the Llanfyllin branch. Alas, I alighted at Llanymynech to catch the branch train without realising that my own train worked through!

So Llanfyllin was not visited that day – or ever- by train. The consolation was an earlier train and shed visit at Machynlleth, before finding a bed at Barmouth. 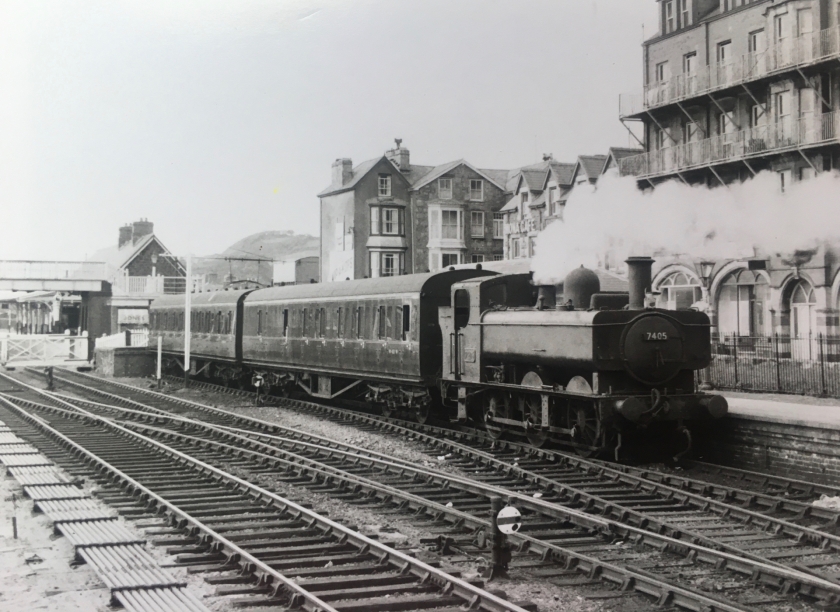 There then followed (Tuesday, 6 June 1961) a circular tour via Afon Wen, the North Wales Main Line and Chester to Barmouth. Shed visits were made at Bangor, Llandudno Junction and Rhyl, with Afon Wen to Bangor being covered by 2-car DMU, which partly explained a line of 2-6-2Ts dumped at Llandudno Junction. 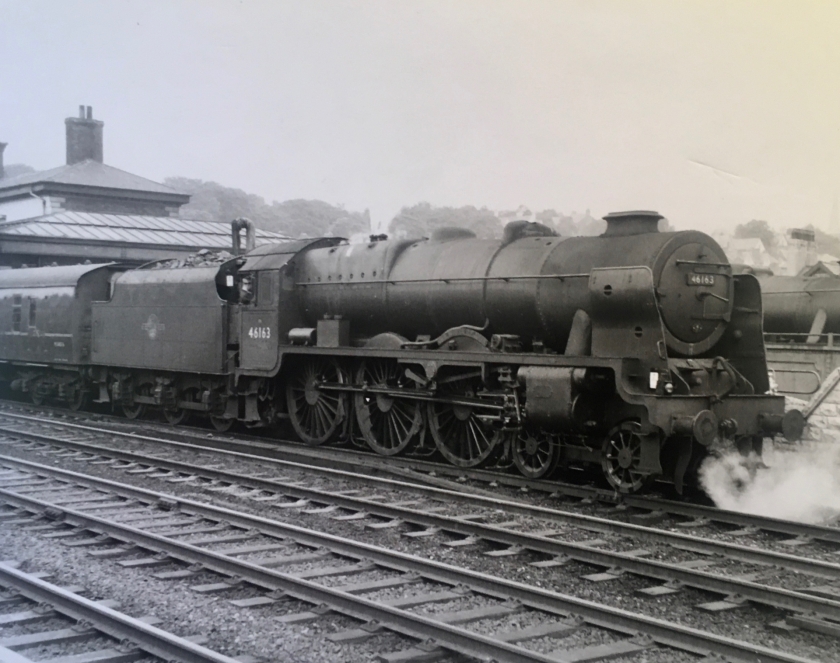 My train engine from Chester to Barmouth was 6357 with driver John Williams of Croes Newydd shed, who I photographed with his loco at Corwen (photo below). 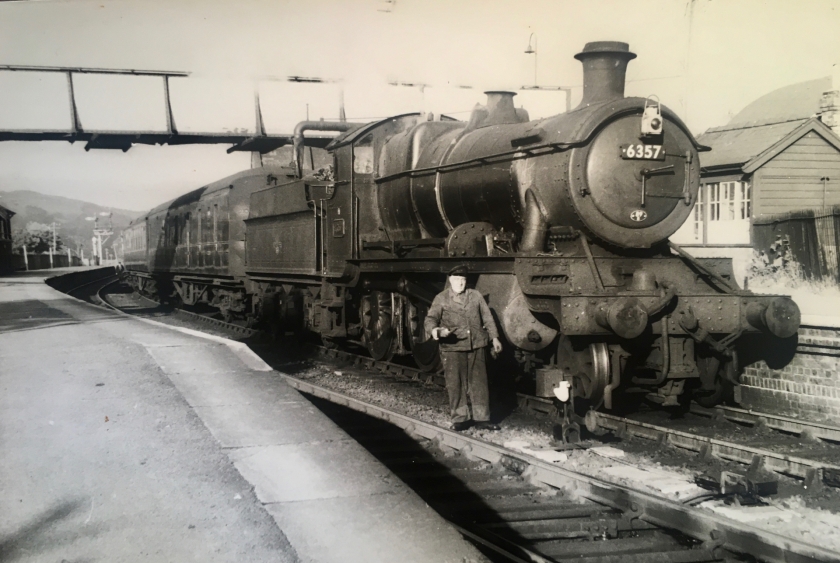 When I later sent him the photograph I got a got a nice letter in return and was told “You should have told me that you were interested – you could have come down on the engine!” Lodgings were again in Barmouth.

My third leg of this expedition (Wednesday, 7 June 1961) was planned to cover the lengthy stretch from Aberystwyth to Carmarthen, followed by the twice-daily service from Llanelli to Pantyffynnon and back by the LNWR route to Swansea (Victoria).

A first highlight of the day was the sight of an immaculate 7803 “Barcote Manor” at Dovey Junction on the up Cambrian Coast Express (photo above). 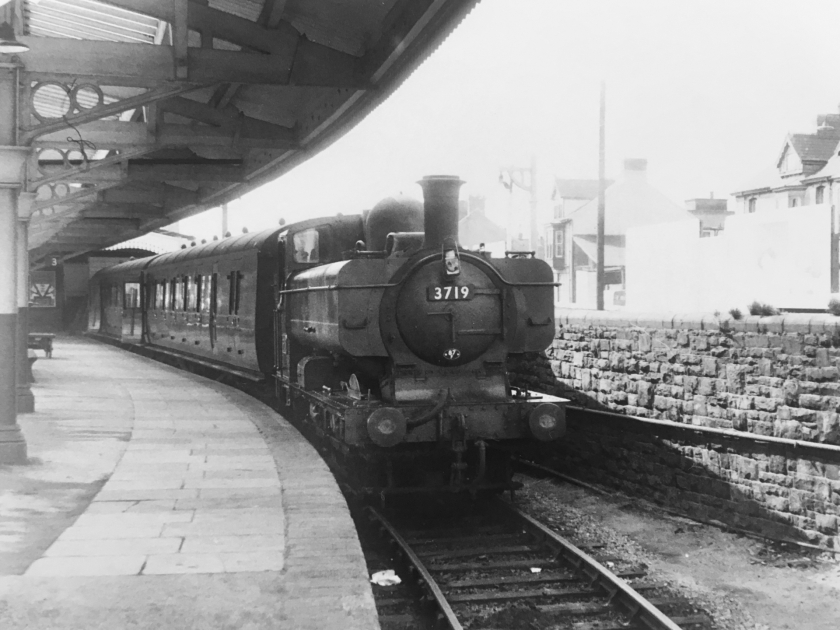 Shed visits were of the minor variety – Burry Port and Pantyffynnon, followed by Swansea East Dock and Upper Bank during an evening spent in Swansea.

The final leg of this expedition (Thursday, 8 June 1961) involved the 8.00am from Swansea to Neyland; Neyland-Johnston-Milford Haven, then main line back to Newport and an unauthorised trip via Bristol (Temple Meads) back to Cheltenham Spa (Lansdown). Shed visits comprised Neyland, Milford Haven and Whitland.

*Neyland-Johnston closed to passengers on 15 June 1964

BACK TO SOUTH WALES

My third and final safari (Friday, 9 June 1961) started, like the previous two, on the 6.43am from Cheltenham Spa (St. James). On this occasion I alighted at Gloucester (Central) and took the 7.10am train to Hereford, followed by a memorable journey to Three Cocks Junction.

I then travelled on to Builth Road, returning to Talyllyn Junction and continuing to Fochriw. Alas, I was not able to include the section from Builth Road to Moat Lane Junction. 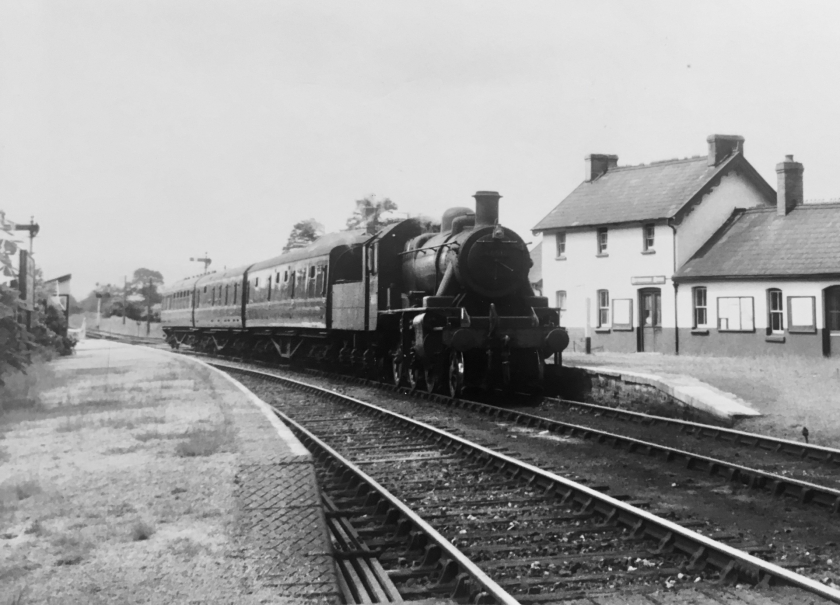 From Fochriw I walked to Rhymney to visit the shed and later catch a DMU to Cardiff Queen Street. I then made a quick trip to Radyr and later another from Newport to Pontypool Road, before finally returning to Cheltenham on the 8.37pm from Newport. 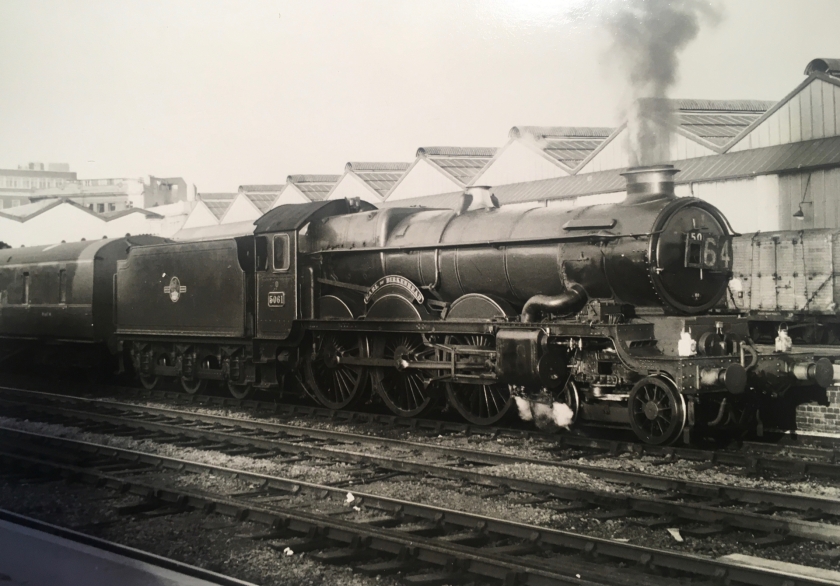