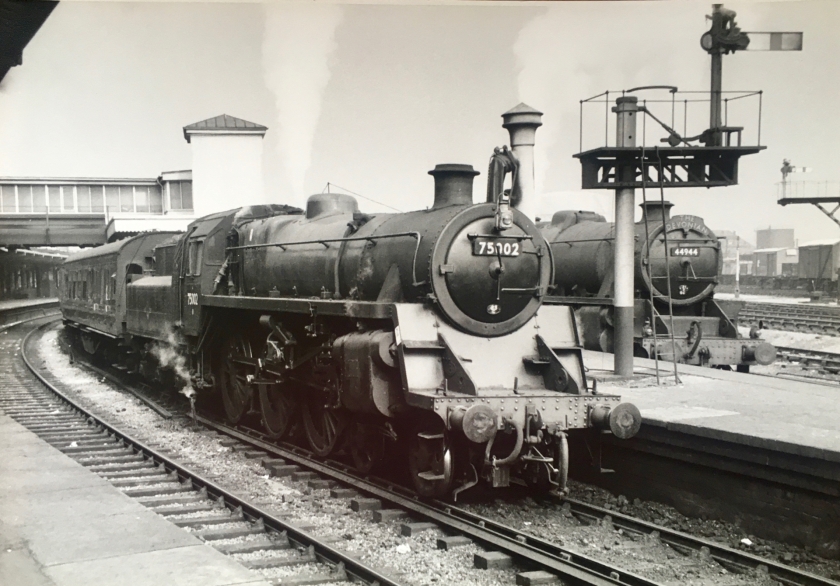 CONSIDERABLE interest was aroused by the account I published last week of my late father’s 1961 rail travels in Wales so, for what will hopefully prove to be one of my final lockdown retrospectives, this is a look through his lens at steam action in Gloucestershire during the early 1960s.

As in Wales, closures across the county began well before Dr Beeching published his infamous report in March 1963, with the routes to Kingham and Andover Junction having already succumbed by the time The reshaping of British Railways was released, as seen in the chronological list below of lost railway routes and stations.

Having a rail enthusiast father who did not drive a car until 1962 meant many opportunities to travel by train. While I was not with him for all of the following pictures, I count myself very lucky to have travelled on many of the routes listed, among them Cheltenham-Kingham, Ashchurch-Evesham, the Chalford auto-train, the two branch lines from Kemble and Sharpness-Berkeley Road.

I vividly recall a race between two trains – the steam-hauled service I was on to St. James station and a DMU – between Gloucester and Lansdown Junction – when it was quadruple track, and have often wondered if I am the youngest person alive today who travelled the entire MSWJ route from Cheltenham Spa (St. James) to Southampton!

*Effective date, which was often two days after the final train had run, as many places did not have a Sunday service and last trains were typically on a Saturday

What follows is a selection of images from around the county, which were taken by Trefor in the early 1960s. While many of the routes listed above do not feature, it does include a variety of locations across the county and hopefully gives an impression of just how much was about to be lost forever. 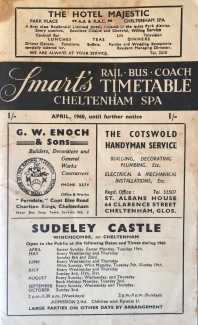 In planning trips around the county, one invaluable guide was a local rail, bus and coach timetable, published by a firm called L.A. Smart, of Northgate Street in Gloucester. It ceased publication in April 1960 and the timetables featured are from that final edition.

One popular spot was the junction at Ashchurch, eight miles north of Cheltenham Spa (Lansdown) on the Midland route from Bristol to Birmingham and junction for the branches to Upton-on-Severn via Tewkesbury and to Redditch via Evesham.

Closures came early at Ashchurch, as shown in the table above, with the branch to Upton-on-Severn closing with effect from 14 August 1961 (the section onwards from Upton to Malvern Wells had closed in December 1952) and the once important freight route to Evesham closing just under two years later.

Trefor paid many visits to Ashchurch, amongst which was a trip on Saturday, 12 August 1961 to capture Midland Railway 3F 0-6-0 43754 waiting to depart with the final service to Upton-on-Severn. Closures were something of a rarity in 1961, so there were none of crowds that marked subsequent closures during the Beeching era.

A notable feature at Ashchurch was its modern and short-lived signal box, seen on the right in this view below from 9 June 1962, where a GWR 2800 Class loco passes the station with a southbound freight, as the 4.25pm to Evesham awaits departure. 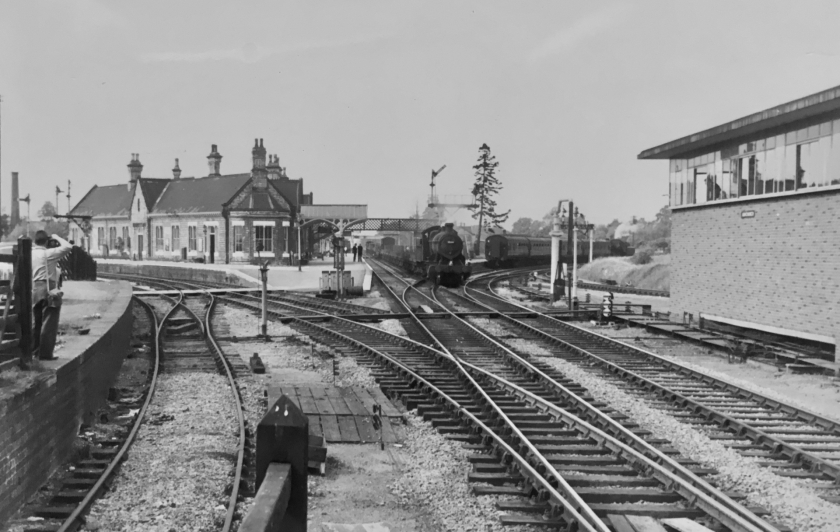 The signal box opened in July 1958, replacing two earlier structures, but the combination of branch line closures and arrival of Multiple Aspect Signalling (MAS) in the area a decade later meant it was replaced by Gloucester Panel Box in February 1969.

Ashchurch station itself closed on 15 November 1971, but was re-opened on 1 June, 1997. It has benefited enormously from being located just 400 yards from junction 9 on the M5 motorway and in a growing residential area, with the most recent ORR count showing it was used by 102,688 passengers in 2018/9.

Two of the earliest 1960s closures to hit the elegant spa town were loss of stopping services on the GWR route to Honeybourne in April 1960, followed by loss of the remaining daily service along the former MSWJ route via Andover Junction to Southampton in September 1961.

Along with St. James station, the other Cheltenham station to lose its services at the start of 1966 was Malvern Road, a through station with an island platform on the Honeybourne line, from where a footpath ran alongside the line to conveniently take you to Lansdown station on the Midland route from Bristol to Birmingham.

Summer Saturdays in the early 1960s saw a number of additional holiday expresses from the north using the GWR Honeybourne Line on their journeys to destinations in the south-west and South Wales. 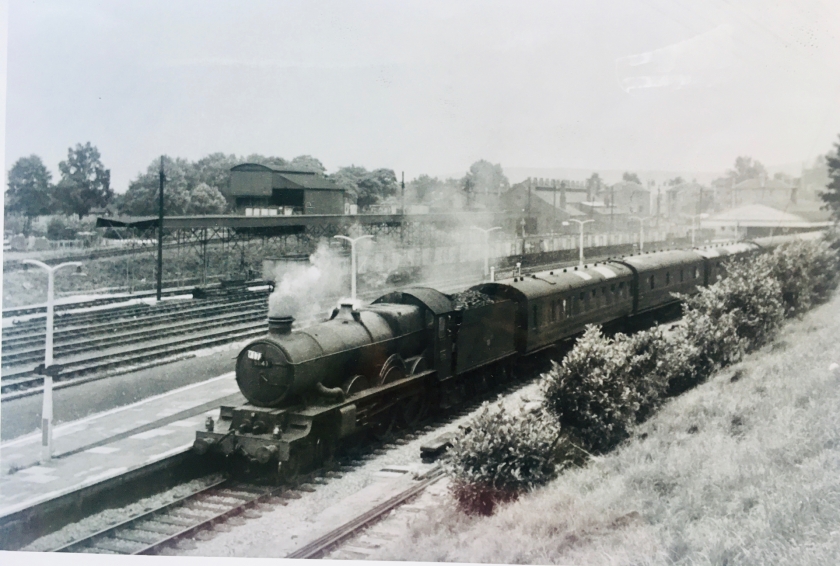 Moving to the northern edge of Cheltenham, the over-bridge on Swindon Lane features in this view on 10 September 1965, where Britannia Class 4-6-2 70053 Moray Firth passes with a southbound service shortly before its 10.00am call at Malvern Road.

Cheltenham Race Course station was a great spot for photographing passing trains, and the first of two views from Trefor’s Gloucestershire album below shows 6952 Kimberley Hall passing on 19 June 1965 with a northbound ballast train. 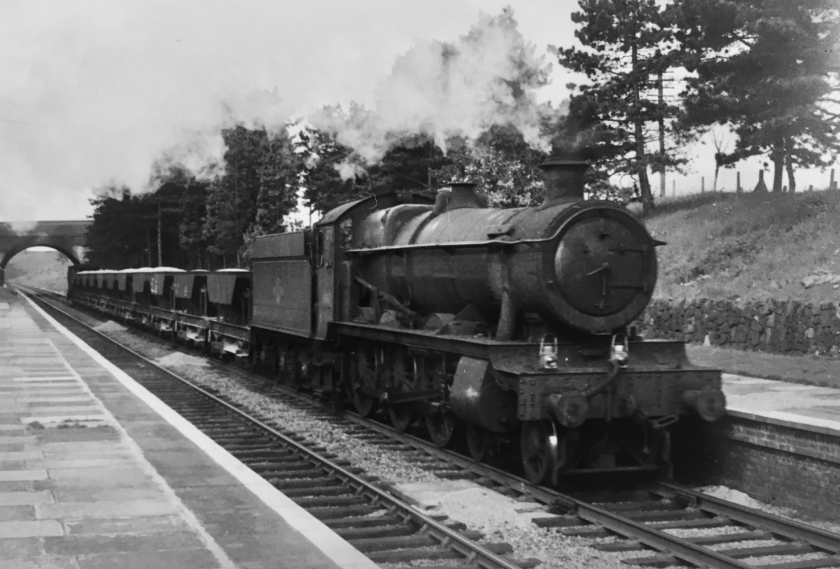 Three years earlier, on 11 August 1962, Castle Class 5089 Westminster Abbey passes with a summer Saturday service that will shortly make an 11.59am call at Malvern Road. 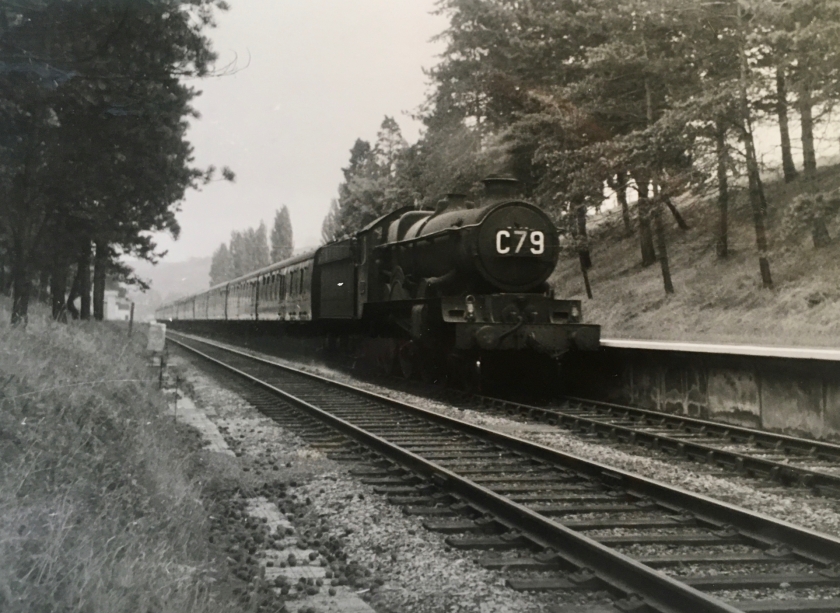 Another favourite spot of Trefor’s for capturing the Honeybourne line’s summer Saturday services was the closed station at Bishops Cleeve.

Two views of the station on 18 August 1962 show the fireman of 5026 Criccieth Castle giving Trefor a wave as he passes with a service from Weston-super-Mare to Birmingham (Snow Hill) (above), while the shot below shows 7929 Wyke Hall passing only minutes later with a southbound service.

One of the finest vantage points in Cheltenham was from an over-bridge carrying the A40 Gloucester Road just south of Lansdown station. Looking north from the bridge the Midland route swept round to the left into Lansdown station while on the right the GWR’s Honeybourne line continued straight ahead towards Malvern Road station.

These two views looking north show Modified Hall 4-6-0 6993 Arthog Hall approaching the junction from the Honeybourne Line with a summer Saturday service on 18 August 1962 (above) while the photo below shows Standard Class 9F 92138 with a southbound freight that has just passed Lansdown station. 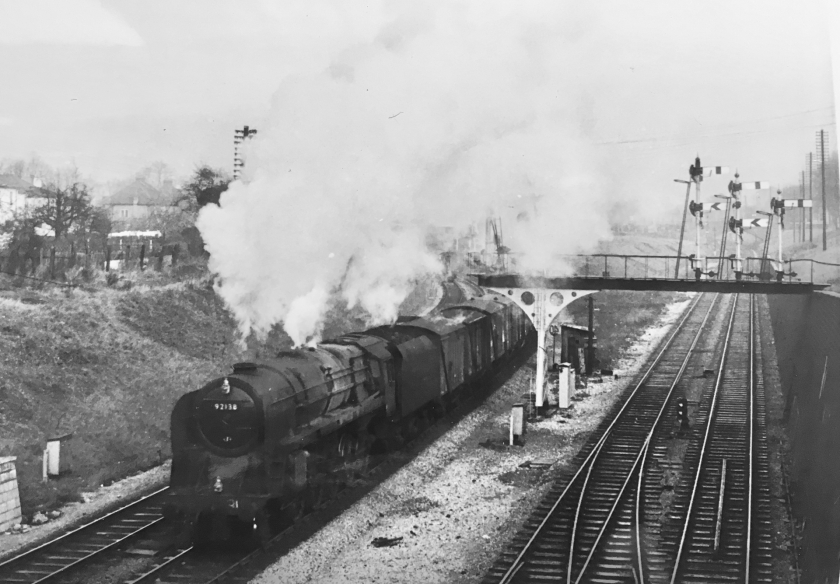 Looking south, Lansdown Junction Signal Box stood on the east side of the line in the fork made by the double track route to Andoversford diverging behind the box and the section of quadruple track towards Gloucester passing in front of the box. The signal box was one of the war-time ARP designs, built in 1942 and remarkably surviving to this day, albeit now an empty shell. 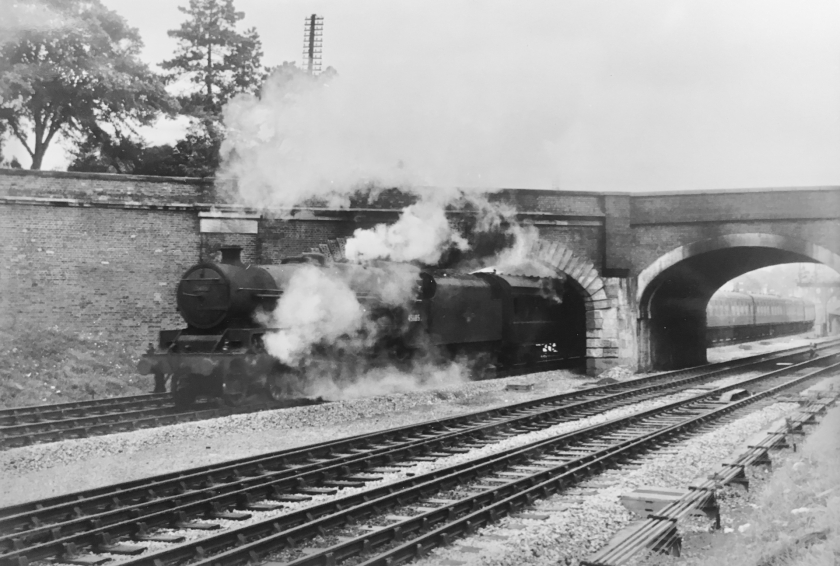 In the view above we see Jubilee Class 4-6-0 45685 Barfleur on 10 August 1963 emerging from Lansdown station towards the junction with a southbound express, while seen below is 4MT 0–6-2T 5164 approaching the rear of the signal box on 18 August 1962 with the 10.50 service from St. James station to Kingham, just two months before services were withdrawn.

Gloucester was a hive of railway activity in the early 1960s, with its two engine sheds, Horton Road and the nearby ex-LMS Barnwood (closed in 1963), two separate branch lines to the docks and two busy railway stations, the ex-LMS Eastgate (featured in the bottom photo) and ex-GWR Central, which since 1975 has been city’s only station.

One of the great photo locations in the city was Tramway Crossing, next to Horton Road shed, which can be seen in the background of this view (above) from 26 May 1963 where 2-10-0 92028, one of the 10 Standard Class 9Fs to have a Crosti-boiler, storms towards the crossing with a lengthy northbound freight train. 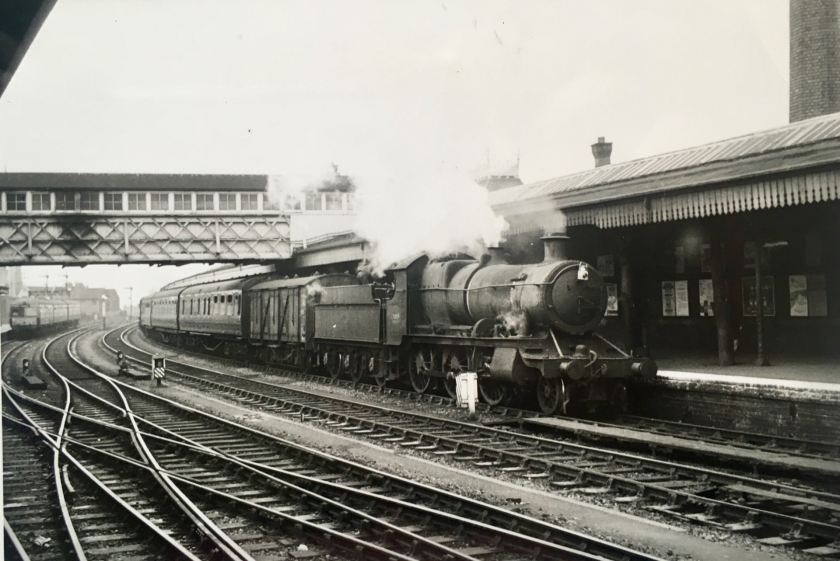 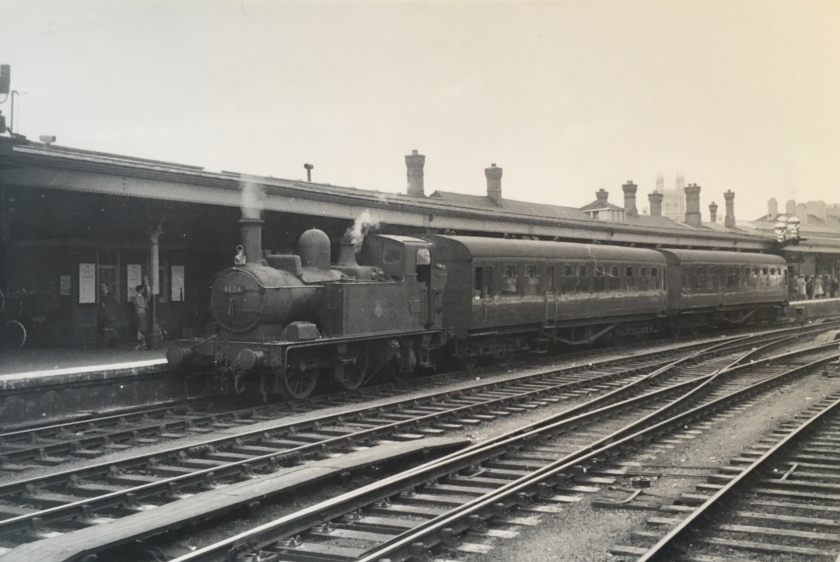 Sharpness only became a branch line terminus at the start of the decade, when two barges destroyed a section of the famous Severn Bridge on 25 October 1960, severing the rail link over it to Lydney Junction.

Passenger services over the four-mile route to a junction with the Midland main line at Berkeley Road continued for another four years, and the branch itself survives to this day, seeing very occasional docks and nuclear traffic and currently the subject of an active preservation attempt. 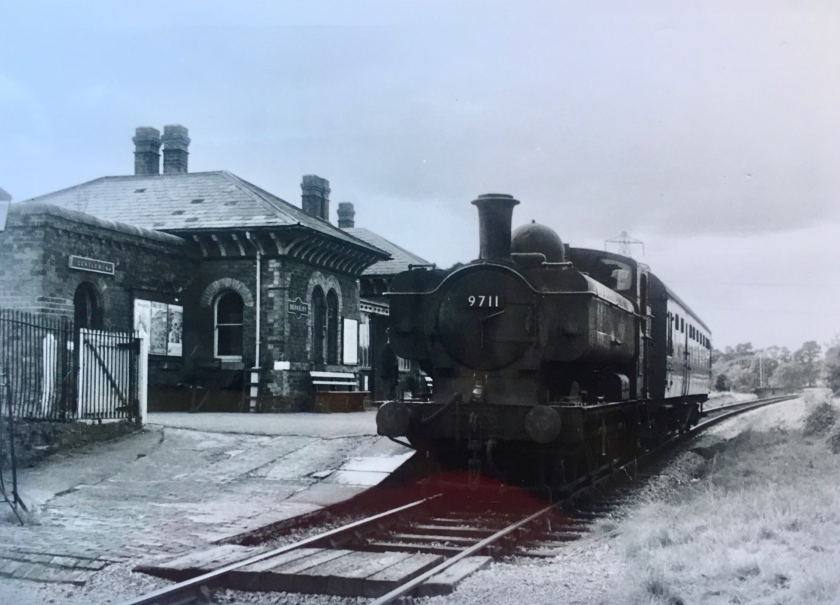 One exception to the steamy scenes above was the two branch lines from Kemble to Cirencester (Town) and to Tetbury, which had been converted to operation by AC four-wheel rail-buses in February 1959 in an attempt to reduce operating costs and boost traffic. One of the rail-buses is seen below at Tetbury station on 11 June 1962.

Introduction of the rail-buses saw the frequency on the 7½-mile Tetbury branch increased to eight round trips daily, re-opening of Culkerton station and the opening of two new and very basic halts, Trouble House and Church’s Hill, the latter seen below on a 28 August 1962 visit by me, my sister, grandfather and aunt! 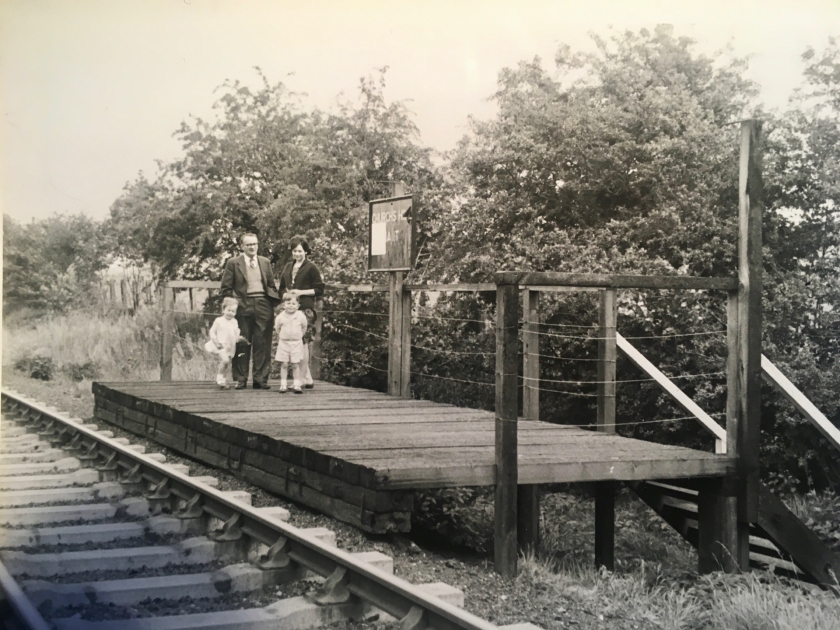 Despite achieving a significant increase in passenger numbers, notably on the Cirencester service, the 46-seater rail-buses failed to save either of the branch lines. After featuring in the Beeching report of March 1963, they both closed just over a year later, although ambitious plans are afoot to revive services to Cirencester.

One place in Gloucestershire’s railway history that has changed far less than pretty much anywhere else is Moreton-in-Marsh, with its signal box and semaphores surviving to this day. On 13 February 1965, less than a year before closure of most intermediate stations, 4-6-0 6923 Croxteth Hall draws into the station with stock for the 3.23pm (SO) to Worcester (Shrub Hill). 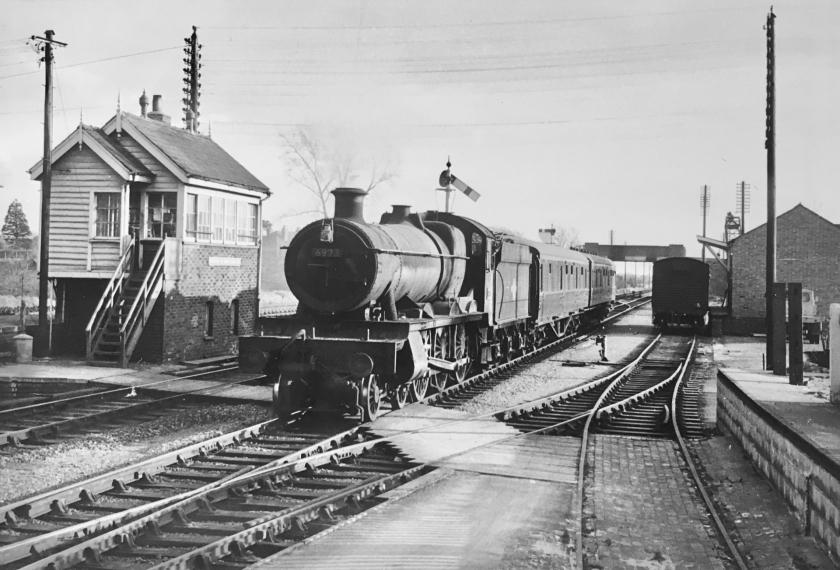 For some marvellous words and pictures of this era in Gloucestershire, take a look at: https://sites.google.com/site/gloucestershirerailwaymemories/

Top photo shows Gloucester (Eastgate) on 6 May 1961, where Standard Class 4MT 75002 waits with a Bristol-bound service as Class 5 44944 is about to depart with “The Devonian” service from Bradford (Forster Square) to Paignton.

Photo below shows Ashchurch station on 27 July 1963, just a month after the Evesham branch on the right had closed. A group of young enthusiasts watches as Jubilee Class 4-6-0 45626 “Seychelles” passes with an express bound for the south-west. 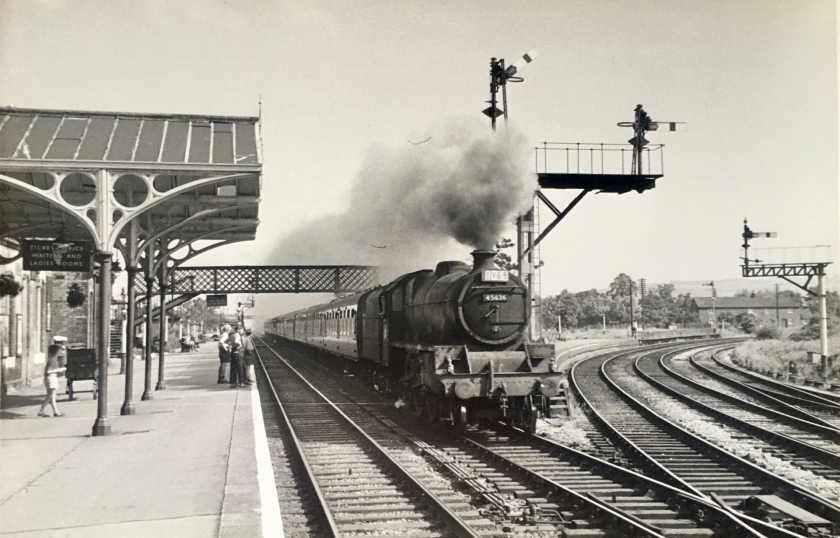